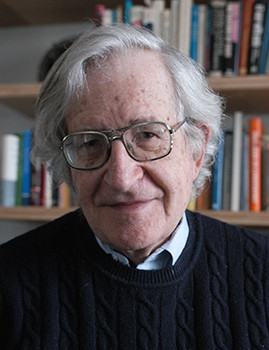 Social critic and peace activist Noam Chomsky is the most cited public intellectual of today.

His works in linguistics, philosophy and cognitive science have earned him the title the "father of modern linguistics". His critical publications on mass media, politics and globalization have put him on the forefront of civil activism starting as anti-war activist in the 1960s and now as supporter of the Occupy movement.

The exhibition of the work Sugababe (2013), by Diemut Strebe, will be opened at the ZKM in conjunction with Noam Chomsky’s lecture. The work is a replica of Vincent van Gogh’s left ear produced by means of artificially engendered living tissue, which the artist developed together with North American scientists. The reconstruction not only has the form of van Gogh‘s ear; it is constituted of living cells which contain natural and artificial information derived from one of van Gogh’s enve-lopes. The ear’s tissue was produced by means of 3D printers. Visitors can speak to the ear through a microphone. The words change once they pass through the nutrient solution in which the ear is placed and penetrate the artificial nerve tissue. The sound, as perceived by the ear is, in turn, rendered audible through a sound installation.
www.zkm.de