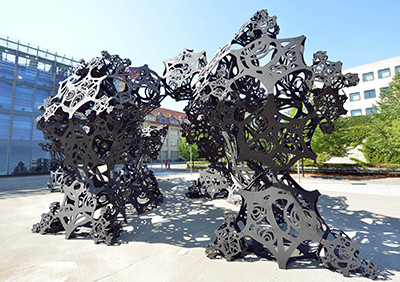 The Morning Line at the ZKM_Forecourt
© photo: Uli Deck 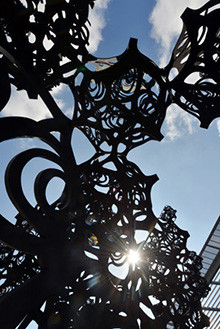 At the beginning of the New Art Season 2013/2014, during a formel ceremony on September 15, 2013, the Thyssen-Bornemisza Art Contemporary Foundation (TBA21) will be permanently handing over the Sound Pavilion "The Morning Line" to the ZKM. Following locations such as Seville and Istanbul, the Sound Pavilion was until recently located on Schwarzenbergplatz in Vienna and since August it is accessible on the ZKM_Forecourt.

The Sound Pavilion consists of 46 loudspeakers and 12 subwoofers which are guided by a central control unit. "The Morning Line" by artist Matthew Ritchie, the architects ArandaLasch and Arup AGU is thus especially suited for live, open-air performances. From mid-September, primarily contemporary electro-acoustic compositions by international artists will be audible and experienceable over the ZKM_Forecourt.

As an oversized sound body accessible to the visitors "The Morning Line" represents very new kinds of components in the ZKM’s interactive concept: The installation not only responds to the musician’s instructions; by means of a software extremely sensitive to changes to the flow of visitors are also registered, which, in turn, impact upon the form of sound. This unique, interactive sound system was designed by Tony Myatt, and the Music Research Centre of York University.

Under the direction of Peter Weibel, Chairman of the ZKM, additional interdisciplinary sound experiments and collaborative projects between the ZKM and Thyssen-Bornemisza Art Contemporary are being planned:

"The future of 'The Morning Line' not only lies in its permanent construction in public space, but in ongoing sonic use as a site for advanced compositions." (Francesca von Habsburg, Chairwoman of the TBA21)

About Thyssen-Bornemisza Art Contemporary
TBA21 was founded in 2002 by Francesca von Habsburg in Vienna.

The foundation is committed to supporting the production of contemporary art and is actively engaged in commissioning and disseminating unconventional projects that defy traditional disciplinary categorizations. Furthermore, the foundation has an ongoing institutional commitment to the growing importance of art made in different parts of the world and explores modes of presentation that are intended to provoke and broaden the way viewers perceive and experience art.

Projects initiated by the foundation promote artistic practices that are architectural, context- and site-specific, performative, and often informed by an interest in social aesthetics and sociopolitical concerns. Many of the projects reflect the shift away from disciplinary to transdisciplinary practices embracing architecture, sound and music, and forms of dialogic research.
www.zkm.de