The Song of the Line. Stephan von Huene - Drawings from Five Decades 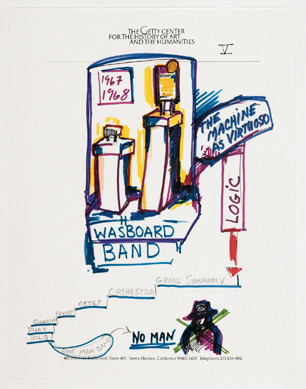 The artist Stephan von Huene (1932–2000), renown as creator of sound sculptures, was also an outstanding visual artist. In cooperation with the Hamburger Kunsthalle, the exhibition “The Song of the Line” offers a first overview of his entire graphic oeuvre. In California of the 1960s, Huene created pen and ink and pencil drawings, which attest to his familiarity with the works of Pablo Picasso, the North American sculptures of the Kwakiutl Indians, and the cartoon drawings of the Disney imperium.
The figures in these early, virtuously executed drawings open up a panerotic visual cosmos rife with allusions to the mythological pictorial traditions of various cultures and eras. Stephan von Huene, who was a guest at the artist program DAAD in 1976/77 in Berlin, and held a professorship at the Karlsruhe University of Arts and Design from 1993 to 1996, settled in Hamburg in 1980 after working for a time as guest professor at the University of the Arts (UdK Berlin). The series of ZEITCollages were created in this context. Using fragments from newspapers and hand drawings, they cast a glance at the gestures of politicians, literary figures, and artists. These collages also reflect the sweeping studies of American communication theories, which for this artist-scientist were just as important as knowledge about sound tones and body language, computers, and caricature. In the 1980s, Huene further developed the genre of the word-image with his so-called “mind maps.” These circuit diagrams of memory visualize the genesis of his sound sculptures in image and text. In connection with the sound sculpture “Die neue Lore Ley,” the technically skilled artist turned to computer-generated drawing in the 1990s. A selection of sketches and studies from Huene’s everyday life at work, home, and the university round off this extensive exhibition of his works on paper.