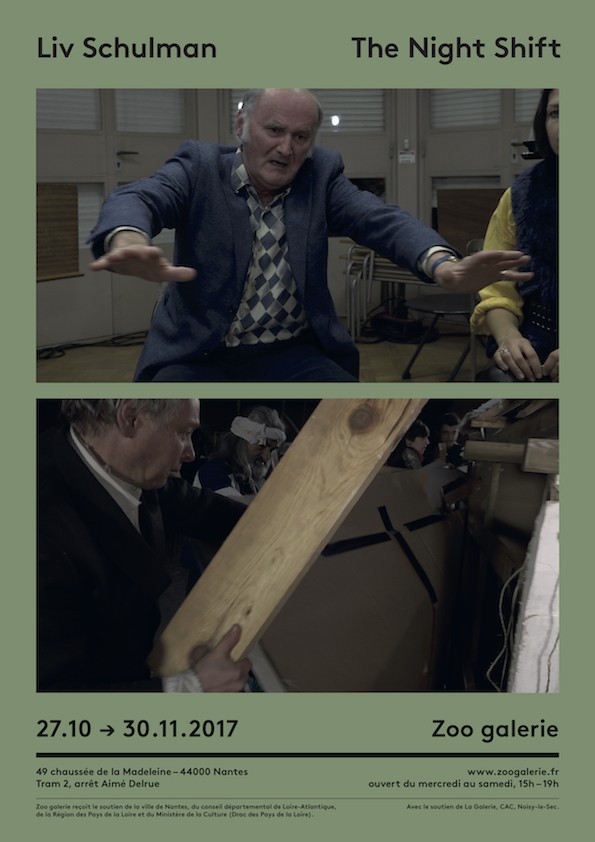 For her first solo show in France, Liv Schulman is showing a mini-series in three episodes about a group of scriptwriters suffering from a tremendous shortage of ideas.

Que faire?was entirely filmed in municipal premises in Noisy-le-Sec with a group of amateur actors, all living in the city. Que faire? is intended to offer clues about strategies for constructing fictions and distilling ideas about the potential of creativity as a productive force. It presents a heterogeneous group of characters resulting from the artist’s intense scriptwriting energy, fuelled by the close observation of a place devoted to the production of cultural discourse, the art centre. Inspired by Lenin’s book emphasizing the need to form groups in order to produce action, the series describes its opposite counterpart: undermined by the powerlessness eating away at them, all that the group of scriptwriters manages to develop is an acute form of frustration. Liv Schulman’s fiction describes the process of alienation of a category of people, authors of series, and victims of the ruthless pressure of a system which summons them, come what may, to produce recreational fiction.

The recourse to guiding therapies, supposedly capable of unravelling the blocked situations which scriptwriters are victims of, merely accentuates the difficulties experienced by these latter, who end up being joined together in frustration and inactivity, upsetting, in passing, Lenin’s positivist motto. Liv Schulman’s work sheds light on the fundamental hiatus of these writers, prompted by an obligation to come up with results to produce effective scripts under constraint—against all logic. Here again, Schulman’s work sheds light on the paradoxical signals which a society sends to its “creators”, when it aligns the system of creativity with that of productivity. Playing in a merry way with the jargon of therapists, she presents a group of people at odds with their own characters, no longer knowing too well in what order of things—fictional or real—they are situated, terrorized by a sadistic Lacanian shrink. The interchangeable décor of these anonymous municipal premises conjures up the similarly interchangeable and devalued life of the characters. At Zoo Galerie, a large and rudimentarily made patchwork will cover the sofas, couches and other furniture, in such a way that all that emerges from it is monitors, like a kind of leftover of the productive activity of a place which lets only films exist.