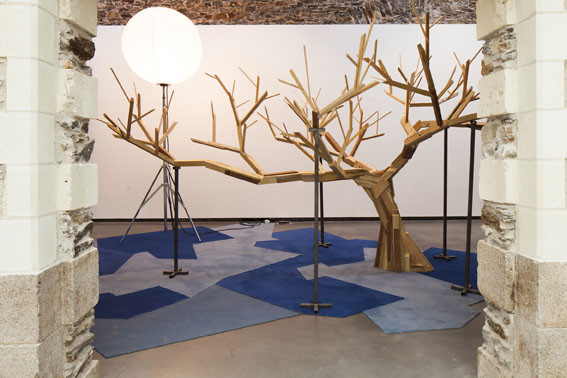 Ecological issues permeate contemporary art—from the pioneering Gustav Metzger, creator in 1959 of self-destructive art, to the young Pamela Rosenkranz, who produces disconcerting paintings on survival blankets, by way of Lara Almarcegui who, at the 55th Venice Biennale, is currently screening a striking slide-show about an island made of rubble located just a mile or two from the national pavilions, many an artist has broached the topic head-on. However, devising an exhibition within the framework imposed by the attribution of a green label to the host city possibly called for a more muffled approach.

The end of the world did not happen last year, but, for all that, we are not free of the anxiety offered us, in a correlative way, by the advent of modernity and our freedom. This anxiety of godless man, put away on the confines of the cosmos, because his central position has been dethroned, has since been incarnated in many different forms, ranging from vitalism to nihilism, and from progressivism to catastrophism... To the point of being increasingly developed within an ethic of catastrophe nowadays being dictated by both politicians and economists, ecologists and apocalyptic gurus. It is frequently the environmental terrain that crystallizes these fears, perhaps in a facile way, through its universality. It is now reckoned that we are in a state of global ecological crisis, and have been for ten, twenty, thirty years, depending on your fix, but what is really meant by these words? For some, the ecological crisis is, above all, an economic crisis; for others, it is first and foremost metaphysical. When the former think that they can put things right through agreements like the Kyoto protocol, the latter seek to define its origins in the ways we think about things.

So « The Green Peril » should be understood in two ways: at first glance contradictory, and then linked. If it seems to be a given that nature is being endangered by man—since the Industrial Revolution in the late 18th century for the advocates of the Anthropocene, and since the advent of globalization, and more particularly the first decade of the 21st century, for more widespread opinion—, it is no less plausible to see it as a possible endangerment of humanity. It is nevertheless not a question here of submitting to any old anthropomorphic projections of the type “Let us weep in our hearts, nature is suffering because of us, we must do all we can to protect her”, and “Let us be afraid, nature will have her revenge on man who ill-treats her”; it is not useful either to make her a thinking subject, or a suffering object to understand the challenges of our relation to her. Above all, it seems urgent to review our imagination so as to stop thinking in a binary, idealized way.

« The Green Peril » thus brings together artists for whom ecology—in the primary sense of the study of the relations between living beings and their environment—represents a crucial questioning, whether they reveal the paradoxical fragility between beings, or whether, under colourful appearances, they formalize the creeping fear of an essentially uncertain future, whether they are fundamentally involved or whether they are looking for the flaws in green-oriented conservatism. Two orientations overlap in the exhibition: works which, under “realistic”, or even documentary appearances, open up a fictional space which, furthermore, has a great deal to do with the issue of the defence of a territory (that of Marie Voignier with the Hitchcockian reminiscence that is unfailingly created by the dark clouds of starlings wheeling about on the screen; that of Clarisse Hahn whose naked heroes transform the demonstration into a sort of strange parade; the Superflex film which lends catastrophe an eminently contemplative dimension, and Blaise Parmentier’s project which turns cartographic data into sculpture),and works which, from an angle that is far more removed from reality, paradoxically broach very precise issues (Scoli Acosta’s solar-powered chandelier, Julien-Berthier’s aestheticized waste, A Kassen’s “useless recycling”, and Pierre Maphettes’s recreated landscape. A little grist to the mill of our denizen’s consciences.
www.zoogalerie.fr