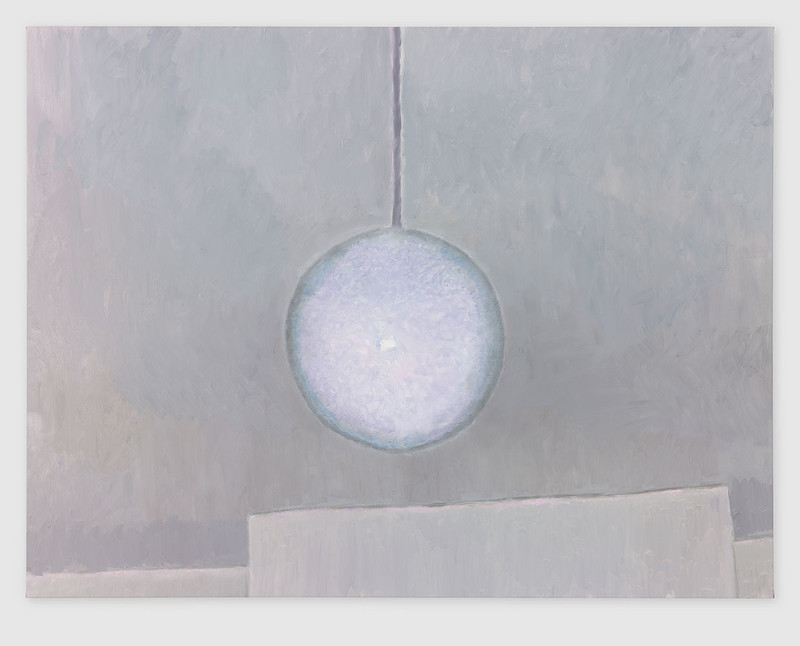 David Zwirner is pleased to present an exhibition of new paintings by Luc Tuymans. On view at the London gallery, which Tuymans inaugurated in October 2012 with the exhibition Allo!, The Shore includes work specifically made for this space.

Widely credited with having contributed to the revival of painting in the 1990s, Tuymans continues to assert its relevance by addressing a diverse range of topics. Quiet, restrained, and at times unsettling, his works engage equally with questions of history and its representation as with quotidian subject matter cast in unfamiliar and eerie light. Painted from pre-existing imagery, they often appear slightly out-of-focus and sparsely colored, like third-degree abstractions from reality. Whereas earlier works were based on magazine pictures, drawings, television footage, and Polaroids, recent source images include material accessed online and the artist’s own iPhone photos, printed out and sometimes re-photographed several times.

In The Shore, Tuymans’s twelfth solo show with the gallery, the cool light of digital screens reverberates with the color scheme of many of the paintings. On the ground floor, portraits of three Scottish Enlightenment thinkers originally painted by Henry Raeburn, one of Scotland’s most acclaimed artists from that time, fill out the small canvases, the flesh of their faces tinted pale blue, and the rest of their bodies and scholarly backgrounds dispersed. Captivated by Raeburn since an excursion to a museum in Ghent as a teen, Tuymans visited the art collection of the University of Edinburgh just prior to the 2014 independence referendum, and found in those works “an element of disruption” that matched the current political climate. Tuymans’s portraits will be shown alongside Raeburn’s originals in a forthcoming exhibition hosted by the Talbot Rice Gallery at the University in the fall of 2015.

The intensity of the close-up portraits is countered by two near-monochrome paintings depicting an obelisk in a wooded landscape and a single, puffy cloud respectively. Based on the wallpaper of a luxury hotel that Tuymans also visited on his Edinburgh trip, their serene, if stifling aestheticism seems to suggest how the perils of isolationism and class indifference may stall the radical ideas of forward-looking members of society.

Enlightenment ethics become juxtaposed with a notion of impending horror in the monumental title painting of the exhibition, kept entirely in a dark hue except from a narrow strip occupied by minuscule people. Based on the opening scene of the colonially-inspired 1968 film A Twist of Sand, the unidentifiable individuals are seconds away from being gunned down by an invisible source. Tuymans has noted that he strived to make a “really dark” painting for a long time, and The Shore relays the profound, if gradual, influence of Francisco Goya on his work. With his own victims unspecified and undifferentiated, the dramas evoked in the Spanish painter’s Black Paintings and The Third of May 1808 (1814) are echoed here on a larger scale, the slaughter as meaningless as it is universal. In Issei Sagawa, horror is suggested on a personal level in a portrait with uncharacteristically loose and gestural brushwork by the artist. Sagawa is notoriously known for killing and eating a fellow student at the Sorbonne University in Paris in the early 1980s, but is a free man today following the end of his prison sentence. It is the third time that Tuymans paints his portrait.

Far from the intensity of such incidents, Bedroom shows a light from the perspective of the artist’s own bed. While Tuymans has previously depicted places and objects from his immediate, local vicinity, the large painting offers little in the way of biographical details, and the bleached light appears impenetrable. Sources of illumination, both direct and reflected, play an important role in his works over the past decade, and a particular kind of mediatized luminescence is apparent across the diverse subjects represented in this exhibition. It adds an unexpected illusionary quality to the canvases—rather than offering the impression of depth, their surfaces become reminiscent of the light that emanates from digital screens. As such, the paintings construct a new context in which historical subjects are presented as if part of the contemporary moment, just as current events are inevitably filtered through their appearance in the mass media, with its often hidden structures and regulations.

Work by the artist is on view as part of two group exhibitions in Poland: Progress and Hygiene at Zachęta National Gallery of Art in Warsaw (through February 15, 2015) and DE. FI. CIEN. CY: Andrzej Wróblewski, René Daniëls, Luc Tuymans at Art Stations Gallery in Poznań (through February 28, 2015). In 2014, Tuymans was awarded an honorary doctorate from the University of Arts in Poznań. A solo show of his printed works, dating from 1989 to the present, will be exhibited at Centre de la Gravure et de l’Image imprimée in La Louvière, Belgium (February 7 – May 10, 2015).

In 2013, a solo presentation of the artist’s portraits, Nice. Luc Tuymans, was held at The Menil Collection in Houston, Texas. In 2009, his work was the subject of a retrospective co-organized by the Wexner Center for the Arts, Columbus, Ohio and the San Francisco Museum of Modern Art. It traveled from 2010 to 2011 to the Dallas Museum of Art; Museum of Contemporary Art Chicago; and Palais des Beaux-Arts, Brussels. Previous major survey shows of the artist’s work include those organized by Moderna Museet Malmö, Sweden in 2009 and Tate Modern, London in 2004. Other venues that have presented recent solo exhibitions include Kunsthalle Bremerhaven, Germany (2012); Centro de Arte Contemporáneo de Málaga, Spain (2011); Haus der Kunst, Munich; Zachęta National Gallery of Art, Warsaw (both 2008); Műcsarnok Kunsthalle, Budapest (2007); and Museu Serralves, Porto, Portugal (2006).

Tuymans was the curator of the 2013 group exhibition Constable, Delacroix, Friedrich, Goya. A Shock to the Senses at Albertinum in Dresden. He previously organized A Vision of Central Europe in 2010 at Brugge Centraal, Bruges, Belgium, as well as The State of Things: Brussels/Beijing in 2009 at Palais des Beaux-Arts, Brussels, which traveled to the National Art Museum of China, Beijing.

A catalogue raisonné of the artist’s paintings is currently being prepared by David Zwirner in collaboration with Studio Luc Tuymans. Compiled and edited by art historian Eva Meyer-Hermann, the catalogue raisonné will illustrate and document approximately five hundred paintings by the artist from 1975 to the present day.

In 2001, the artist represented Belgium at the 49th Venice Biennale. His works are featured in museum collections worldwide, including The Art Institute of Chicago; Centre Georges Pompidou, Paris; Los Angeles County Museum of Art; The Museum of Modern Art, New York; Pinakothek der Moderne, Munich; Solomon R. Guggenheim Museum, New York; and Tate Gallery, London. In 2012, Tuymans donated his portrait of Her Majesty Queen Beatrix of The Netherlands to Stedelijk Museum, Amsterdam. He lives and works in Antwerp.
www.davidzwirner.com