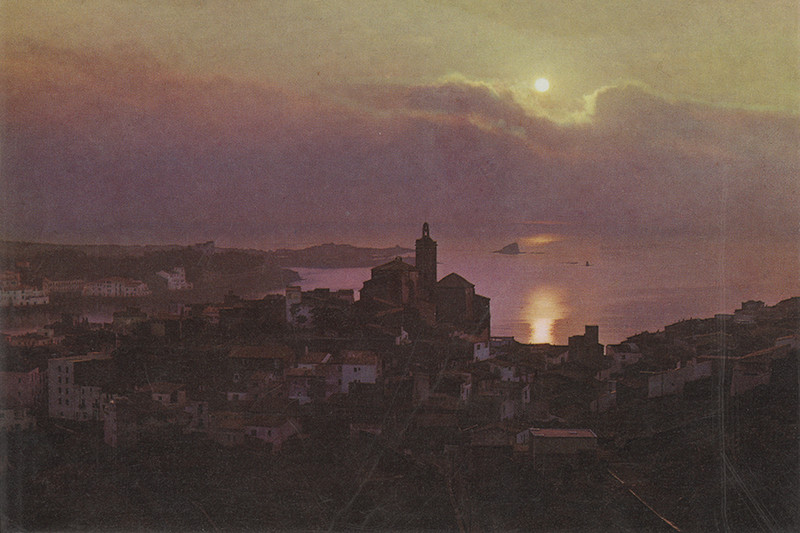 David Zwirner is pleased to present an exhibition of works by Richard Hamilton on view at THE UPPER ROOM at the gallery’s London location. Widely regarded as one of the most influential British artists of the twentieth century, Hamilton worked across a diverse array of media and styles over the course of his six-decade career to create a singular oeuvre that, while formally disparate, remained conceptually consistent in its sustained interrogation of modernity and everyday life. This exhibition brings together a group of rarely seen works made by Hamilton in Cadaqués, Spain, an important site of production for the artist.

Hamilton was first invited to Cadaqués in 1963 by Marcel Duchamp, with whom he had a correspondence since the late 1950s. Located on the Costa Brava in Northeastern Spain, not far from the French border, Cadaqués was known as a favoured destination for artists like Duchamp, Salvador Dalí, Joan Miró, and Pablo Picasso. Hamilton too began to return to Cadaqués frequently, eventually buying a residence there himself. When in 1973 the architect Lanfranco Bombelli opened the aptly named Galería Cadaqués, Hamilton became one of his earliest and most enthusiastic collaborators. Bombelli’s gallery remained active until 1997, focusing on Pop, conceptual art, and concretism, and featuring exhibitions by many of the most influential artists of the period including Duchamp, Joseph Beuys, Max Bill, John Cage, Jasper Johns, and Marcel Broodthaers, among others. Hamilton exhibited at the Galería Cadaqués more than a dozen times, including two seminal collaborations with Dieter Roth in 1976 and 1978.

Included in the exhibition are a group of works made in Cadaqués that appropriate the iconic logo of Ricard, an aniseed liqueur especially popular along the northern coast of the Mediterranean. Commercial advertisements comprised a rich source of imagery for Hamilton, and logos proved particularly generative. Executed in bold, primary colours, the seemingly ubiquitous Ricard logo appeared on carafes, ashtrays, print ads, and enamel signs. In Hamilton’s versions, he has left the logo fully intact, except for the sly insertion of an “H” between the “A” and the “C,” thus changing “Ricard” to “Richard,” his own first name. Applied to facsimiles of the same signs and vessels on which the original logo could typically be found, these works rewarded only the most observant viewer with their clever commentary. Hamilton arranged for the full production of Sign (1975), Carafe (1978), and Ashtray (1979), presenting his own nuanced take on the Readymade that implicitly incorporated indications of commercialism and production, in contrast to Duchamp who merely altered existing objects to make his “assisted” Readymades. On the occasion of the debut of the first enamel signs from this group in a single-day exhibition at the Galería Cadaqués in 1975, Paul Ricard, the proprietor of the eponymous liqueur, arranged for actual Ricard signs to be interspersed with Hamilton’s variations. In addition, visitors were provided with aperitifs and tapas, distributed from a van bearing the Ricard logo parked outside of the gallery, creating the impression of a cocktail party rather than an art opening. Likewise, Hamilton installed several signs in the local bar, underscoring the work’s surreptitious function as an advertisement for himself.

Also presented here will be several works that reference Cadaqués more directly. Comprising nine unique lithographs, Sunrise progressives (1974) belongs to a group of prints and drawings that derive from a postcard of Cadaqués featuring the city’s cathedral, which has been humorously replaced with scatological imagery in an irreverent nod to Carl Jung. This surrealist gesture is distinctively appropriate to Cadaqués and, in particular, two of its most famous artist-denizens: Dalí and Duchamp, both important touchstones for Hamilton. Never before exhibited outside of Spain, this work brings together several important lines of enquiry central to Hamilton’s practice and highlights his ongoing interrogation of mechanical reproduction and mass mediated imagery. Presenting a set of progressives, or colour separated test prints, as a finished artwork was a favoured tactic in this regard and one to which Hamilton returned on multiple occasions. Accordingly, this singular group of lithographs functions as an index of his process, and subverts traditional aesthetic conventions by laying bare the usually hidden mechanisms of printmaking. The bright, primary and secondary colours that result from the separations recall Hamilton’s Pop tendencies established early in his career. Likewise, the pastel drawing Sunset (f) (1975) makes use of the same source image and was executed as a preparatory study for a subsequent print edition, as well as a painting.

Commercially circulated imagery is employed as a Readymade in many of Hamilton’s works made in Cadaqués, such as the drawing Flower-piece study (a) (1971)—Hamilton’s take on a still life, copied from a three-dimensional postcard. Similarly, the cathedral, located near to Hamilton’s home, figured prominently in this regard. For example, in the 1980 collage Altar Piece, executed as an announcement for the forthcoming X Cadaqués Music Festival, Hamilton utilizes both photography and painting to reconstruct the cathedral’s gilded interior, inserting a small coterie of musicians on the pulpit.

Trained as an engineering draftsman during World War II, Richard Hamilton (1922-2011) attended the Royal Academy of Arts (1938-40) and Slade School of Art (1948-51), both in London. Hamilton first garnered attention as a member of the Independent Group, a consortium of artists, writers, and architects formed at the Institute of Contemporary Arts in London in the 1950s that sought to integrate contemporary culture and aesthetics by engaging mass mediated images and new technology as central components of their practice. Widely considered the first Pop artwork to achieve iconic status, Hamilton’s 1956 collage Just What Is It that Makes Today’s Homes So Different, So Appealing? (Collection of the Kunsthalle Tübingen) uniquely channeled the postwar British zeitgeist. During the 1950s he also organized and participated in a number of important and forward-thinking exhibitions in London, including Growth and Form (1951); Man, Machine, and Motion (1955); This is Tomorrow (1956); and an Exhibit (1957). Hamilton’s work has been shown widely around the world and, most recently, he was the subject of a comprehensive retrospective jointly organized by the Museo Nacional Centro de Arte Reina Sofía, Madrid and the Tate Modern, London in 2014.

This is the first exhibition of Hamilton’s work at David Zwirner.
www.davidzwirner.com