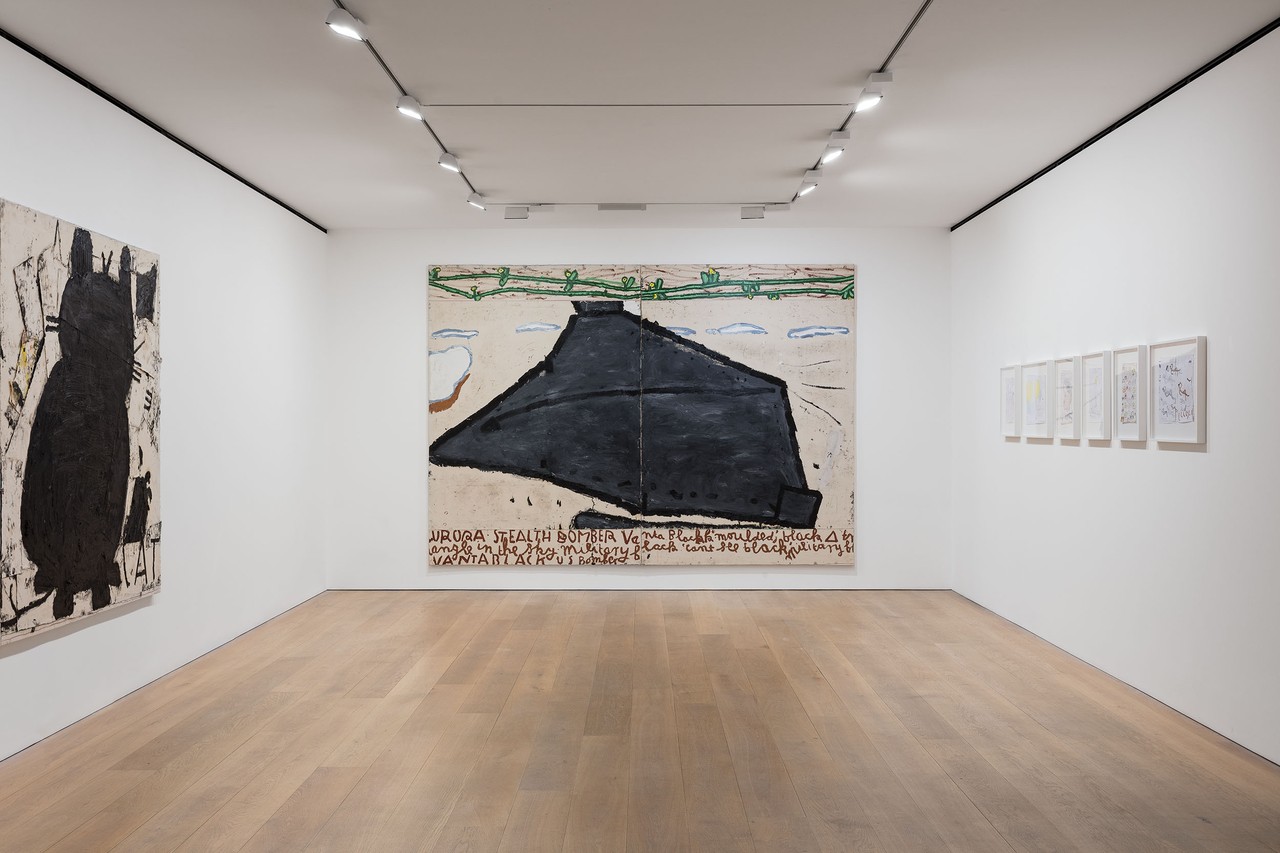 David Zwirner is pleased to present an exhibition of new works by British artist Rose Wylie in THE UPPER ROOM at the gallery's London location. On view for the first time will be the large-scale Black Painting; Horse, Bird, Cat (2016), from which the exhibition takes its title, as well as two recent paintings and a group of works on paper that together underscore the artist's distinctive working process and intuitive approach to image-making.

Wylie creates paintings and drawings that on first glance appear aesthetically simplistic, not seeming to align with any recognizable style or movement, but on closer inspection are revealed to be wittily observed and subtly sophisticated mediations on the nature of visual representation itself. The layers of newspaper that line her studio floor are a frequent source of material for the artist, as she encounters images by chance while working. Drawing from such wide-ranging cultural areas as film, fashion photography, literature, mythology, news images, sports, and individuals she meets in her day-to-day life, Wylie paints colorful and exuberant compositions that are uniquely recognizable. The artist has acknowledged her great admiration for Philip Guston, whose late paintings likewise make use of an idiosyncratic visual lexicon, the directness of cartoonish figures, and a flattened perspective, but simultaneously betray a deep awareness of art history and painterly conventions.

Using images as a prompt, Wylie often works from memory, resulting in works that are replete with associative afterimages that remain only loosely tethered to their original referent, but tightly connected to the stored memory. In this respect, drawing comprises an important aspect of her practice—once she has selected an image or a topic, she typically makes numerous drawings on that theme as a kind of mnemonic exercise from which her paintings eventually emerge. While some of her works on paper are spontaneous responses, others contain a single image repeated endlessly, while others still are more fully realized. Through this sustained process, Wylie's paintings are imbued with a sense of homage and reverence—whether aesthetic or personal—towards her subject matter.

At nearly five-and-a-half meters long (approximately eighteen feet), the three-panel work Black Painting; Horse, Bird, Cat seamlessly brings together high and low points of reference. Rendered in a black, monochromatic palette, the painting features the artist's solution for depicting the animals named in the title. Placed against a neutral backdrop with their labels inscribed below, Wylie's hard-won forms play on the language of ancient art as well as modernism and the abstract compositions of painters like Franz Kline and Ad Reinhardt, who attempted to divorce image-making from even the most fundamental visual associations. To create this work, Wylie forwent using a brush in favor of applying paint directly to the canvas with her hands. Quite literally gestural, but in fact appearing formal in quality, the work's final composition is therefore both intentional and dependent on chance. Instead of revising her initial marks in certain areas, Wylie has collaged pieces of canvas over the paint, introducing texture and small flecks of color that together lend the work an organic nature.

Rose Wylie (b. 1934) studied at Folkestone and Dover School of Art, London, and the Royal College of Art, London, from which she graduated in 1981. Her work has been the subject of renewed critical attention in recent years, including solo presentations at Space K, Seoul (2016); Chapter, Cardiff (2016); Turner Contemporary, Margate (2016); Douglas Hyde Gallery, Dublin (2015); Städtische Galerie Wolfsburg, Germany (2014); Tate Britain, London (2013); Haugar Museum, Tønsberg, Norway (2013); Philadelphia University of the Arts Gallery (2012); and Jerwood Gallery, Hastings (2012). In 2015, a painting by Wylie was included in the Royal Academy of Arts Summer Exhibition, for which she won the Charles Wollaston Award. Her work can be found in prominent collections throughout the United States, Europe, and Asia, including the Hammer Museum, Los Angeles; National Museum of Women in the Arts, Washington, D.C.; Space K, Seoul; Städtische Galerie Wolfsburg, Germany; and Tate Britain, London. In 2015, Wylie was elected a Senior Royal Academician. This is the artist's first exhibition at David Zwirner. She lives and works in Kent, England.
www.davidzwirner.com