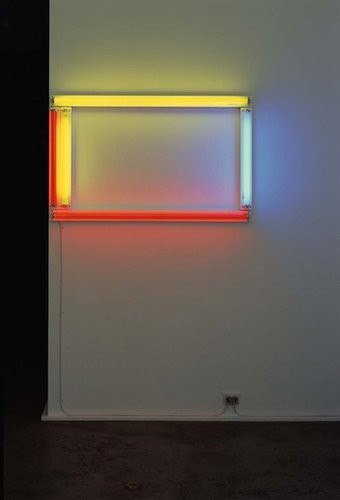 From March 6 through May 3, 2008, Zwirner & Wirth will re-stage the seminal exhibition of Dan Flavin’s fluorescent light sculptures that took place in 1964 at Richard Bellamy’s influential (though short-lived) Green Gallery on West 57th Street, New York (dan flavin: fluorescent light, November 18 - December 12, 1964; illustrated at right). This exhibition was groundbreaking not only in terms of its presentation of radically innovative work that used commercially-available, colored fluorescent light, but also because it marked a turning-point in Flavin’s career. While the artist had previously exhibited a series of hand-made, painted wood constructions with lighting elements affixed to them (known as the “icons”), he began creating works made with fluorescent light alone in 1963. The Green Gallery show was the first exhibition composed entirely of fluorescent lights, and thus marked the development of the minimalist language of illumination that would characterize Flavin’s work until his death in 1996.
Zwirner & Wirth’s space on East 69th Street bears a resemblance to the Green Gallery in its scale and architecture, and each of the seven works from the exhibition will be brought together in a historically accurate recreation of their original presentation. These include such key pieces as the diagonal of May 25, 1963 (to Robert Rosenblum), 1963 (a version of the artist’s first work made with fluorescent light alone, this work is comprised of a single, leaning white light that was installed at the Green Gallery raised off the ground) and a primary picture, 1964 (a rectangular wall piece composed of red, yellow, and blue light). Other works in the exhibition include the artist’s earliest floor piece, titled gold, pink and red, red, 1964 (made of different lengths of yellow, pink, and red fluorescent light that lie side by side) and a serial work comprised of a succession of one, two, and three parallel lamps titled the nominal three (to William of Ockham), 1963. This well known piece will be exhibited as originally presented (its fluorescent lamps were ultimately spaced wider apart from one another and lower to the ground in subsequent installations). Also on view will be a selection of drawings that relate to the Green Gallery exhibition, which show the development of Flavin’s ideas about the works on view and their installation.
While each of the sculptures in the exhibition was conceived by the artist as a specific, individual work, Flavin changed the colors of some of the lamps that he had planned to use once he saw the actual interaction of the colored light in space. The 1964 Green Gallery exhibition was decisive, in that it showed the artist beginning to work through the formal and chromatic relationships that were engendered by his fluorescent light works when they were shown together. As Michael Govan notes, “Flavin ultimately went beyond the idea of specific objects to implicate the entirety of the architecture that contained his work in a three-dimensional environment. From its inception, Flavin’s art was especially sensitive to arrangement and context, and this quickly led to his thinking in terms of whole-room installations—an idea that radically altered the course of art-making in the 1960s.”[1]
This will be the first in a series of exhibitions at Zwirner & Wirth that explore the presentation and influence of groundbreaking historical gallery shows of the 20th Century.
On the occasion of the exhibition, Zwirner & Wirth will publish a fully-illustrated catalogue in collaboration with Steidl, Göttingen. The publication will include reproductions of rare photographs, reviews and documents from the artist’s archives that pertain to the original 1964 show, in addition to statements by artists and critics who saw the Green Gallery exhibition and new scholarship on this body of work by Jeffrey Weiss.
On Saturday, April 12 at 11:30am, Zwirner & Wirth will host a gallery talk led by Tiffany Bell, Curator/Archivist, Dan Flavin, Ltd. Bell was a co-curator of the recent traveling retrospective exhibition of Flavin’s work organized by the Dia Art Foundation in association with the National Gallery of Art and authored the accompanying catalogue raisonné of the artist’s work, Dan Flavin: The Complete Lights (published in 2004).
Dan Flavin (1933-1996) had his first solo exhibition at the Judson Gallery in New York in 1961, and his work was included in a number of key exhibitions of minimal art in the 1960s, including Black, White, and Gray (Wadsworth Atheneum, 1964); Primary Structures (Jewish Museum, New York, 1966); and Minimal Art (Gemeentemuseum, The Hague, 1968). Flavin’s first major museum solo show was organized by the National Gallery of Canada, Ottawa, in 1969, and his work was exhibited widely in the United States and internationally until his death in 1996. A traveling retrospective of his work was recently organized by the Dia Art Foundation in association with the National Gallery of Art (Dan Flavin: A Retrospective, multiple venues, 2004-2007).
www.zwirnerandwirth.com