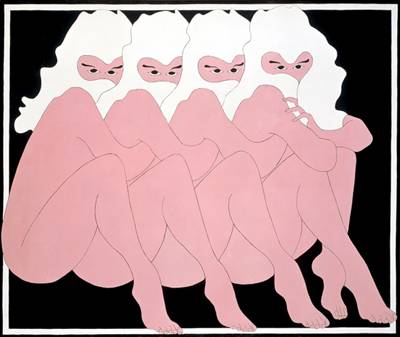 Zwirner & Wirth will present a uniquely focused selection of works from the 1960s to the 1980s by the influential American painter John Wesley. This group of work comes from one of the largest private collections of paintings by the artist.
Using a distinctive comic book style, Wesley has made consistent use of a limited color palette and a carefully refined, stylized graphic vocabulary. The artist implements a deliberately flat spatial quality in his canvases; about his work, he has stated, “My paintings are as flat as I can make them. They’re not supposed to look like paintings. They’re supposed to look more like banners, or posters, or something.”[1] Though often associated with the pop artists of his generation, Wesley’s canvases complicate their co-optation of commercial iconography by presenting narrative scenes that address the realm of the imagination and the strangeness of everyday life. By combining traditional emblems, historical figures, nudes, comic book characters, and animals, Wesley presents a broad range of references in canvases that take up the theme of the human psyche. His paintings distinctively meld together elements of pop, minimalism, and surrealism, which may explain why artists ranging from Donald Judd to several of today’s contemporary painters have been profoundly attracted to his work.

The exhibition will include two significant paintings from 1963 that are among the artist’s earliest canvases. In his early work, Wesley incorporated heraldic imagery in a banner-like format to depict situations of pomp and ceremony. The Arrival of Count de Balliet-Latour (1963) is based on a photograph from a book owned by the artist’s father, which commemorated the 1932 Los Angeles Olympics. Double Wedding (1963) uncannily presents two pairs of brides and grooms. In their incorporation of painted frames within the boundaries of the canvas, these works institute the framing devices that Wesley would continue to develop throughout his career. Further paintings from the 1960s in the exhibition reveal the artist’s interest in repetitive figural iconography and its potential for psychic expression, including Captives (1966), a surreal canvas of masked, interwoven female figures, and Plague (1967), which shows a crouching nude surrounded by a grid of cloned infants. Though Wesley’s work often depicts female nudes, his paintings reveal an awareness of his role as a male artist working in this genre. Moreover, as Terry R. Myers has noted, he is a “refreshingly equal-opportunity objectifier,”[2] as is evidenced in the two canvases included in the exhibition: Rugby Players (1982), which shows a row of male athletes’ legs, and the formally-related Bus Stop in Downtown Iceland (1985), a cartoon-like painting of several pairs of women’s legs in high heels. Other works in the exhibition take on vaguely socio-political themes, such as the large-scale Nine Female Inmates of the Cincinnati Workhouse Participating in a Patriotic Tableau (1976), one of several paintings executed in ambiguous commemoration of the American bicentennial of that year, which depicts a group of women swathed in the U.S. flag.

Since the late 1950s, John Wesley has exhibited widely in the United States and Europe. His first solo exhibition was at Robert Elkon Gallery, New York in 1963, and his work has been shown at such institutions as the Chinati Foundation, Marfa; Los Angeles County Museum of Art; Museum of Contemporary Art, Chicago; Whitney Museum Of American Art; Institute of Contemporary Arts, London; Royal Academy of Arts, London; and the Centro de Arte Reina Sofia, Madrid. Wesley’s work has been included in Documenta 5, Kassel (1972) and was the subject of major retrospectives at Portikus, Frankfurt; the Stedelijk Museum, Amsterdam (1993); the Fogg Art Museum, Cambridge; and PS1 Contemporary Art Center, Long Island City, NY (2000). Wesley was awarded a Guggenheim Fellowship in 1976, a National Endowment for the Arts Grant in 1989, and, most recently, was the 2005 recipient of the Skowhegan Medal for Artistic Achievement in Painting.

The exhibition will be accompanied by a fully-illustrated catalogue with a text by Los Angeles-based art critic Terry R. Myers.