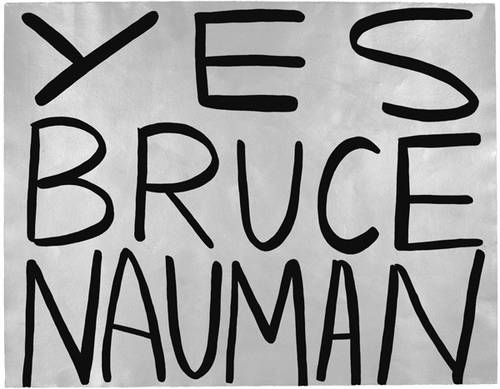 It has often been noted that Bruce Nauman is one of today’s most influential artists, and the range of conceptual and formal innovations in his body of work certainly attests to this claim. Zwirner & Wirth is pleased to present an exhibition that brings together key examples of Nauman’s practice from the 1960s to more recent work while simultaneously examining the reverberations of Nauman’s developments in the work of a younger generation of contemporary artists.

At the heart of the broad range of work that Nauman has produced since the 1960s is an investigation of conflicts – thus, he explores the tensions between artist and viewer; between the means and the content of his works; between language and experience, among other themes. Perhaps one of the main reasons Nauman’s work continues to have a lasting appeal for so many artists is his emphasis on artistic process. His works comprise thorough investigations of his ideas, following them through systematically: for Nauman, art is a type of research endeavor. As Neal Benezra has noted, “Uniting the disparate threads of Nauman’s work is an ongoing devaluation of traditional formal considerations...in favor of a prolonged examination of both the ideas that underlie the object and the role of the artist in contemporary society.”[i]

Among the conceptual concerns played out in Nauman’s work is his use of the body as an object of curiosity: the body is implemented as a physical tool or material with which to make sculpture and performances. Though his earliest works reference the body in its absence (cast pieces that call attention to a previous bodily engagement with the material, for example), Nauman would go on to use his own body as an object of investigation in works that developed a uniquely conceptual style of performance art. Throughout his entire oeuvre, however, the physical relationship of the body to the act of perception is explored. The exhibition presents Nauman’s Flesh to White to Black to Flesh (1967), a videotaped work in which the artist applies different shades of paint to himself. Nauman himself stated, “If you can manipulate clay and end up with art, you can manipulate yourself in it as well. It has to do with using the body as a tool, an object to manipulate.”[i] Paul McCarthy was working on similar experiments of his own in his studio in the early 1970s, presented here with his Black and White Tapes (1970-75). John Bock’s multi-media work titled Gribbohm II Sir_Howdy_Mumsir (2002) combines a video of the artist performing with his theatrical props. Other works in the exhibition explicitly refer to Nauman’s early performance videos and films: In Francesco Vezzoli’s Bouncing Balls (2005), an adult-film actor is hired to re-enact Nauman’s well-known film of the same title. Also on view is Tom Friedman’s My Foot (1991) – a ruler made out to the dimensions of the artist’s own foot, rather than the standard 12 inches – which brings to mind works by Nauman that implement the body as a standard of measurement, including his Neon Templates of the Left Half of My Body Taken at Ten-Inch Intervals (1996). Jason Rhoades is represented in the exhibition by a sculptural work comprised of stand-ins such as clothing and textual neon elements that symbolically and metonymically recall the body. Like Nauman, a number of the artists in the exhibition present the numerous representational constructs that often shape human subjectivity.

Language is perhaps the overarching theme of Nauman’s work. His work operates in the zone between the conceptual aspect of language and its physical presence as sign, questioning the ability of language to accurately define material reality. His neon signs most explicitly play with language, presenting permutations between similar words or by conflating words in ambiguous parings to introduce shifting meanings and to play with the functionality and supposed fixity of language. Laurence Sillars has aptly described the artist’s playful manipulations of language in an explanation of Suite Substitute (1968), one of Nauman’s earliest neon pieces (also in the exhibition): “The word ‘substitute’ is problematized...The word “SUITE’ is superimposed over the same letters in the word ‘SUBSTITUTE’. The pink letters of the first word flash alternately with the green of the second, revealing the construction of each by allusion to the other, exposing language as a system referring only to itself. The work accentuates the alternative possibilities of each word by removing them from functional context.”[iii] Text and language are taken up in the neon works of several of the other artists in the exhibition. Glenn Ligon’s recent neon sculpture Warm Broad Glow (2005) presents shifting temporalities and meanings, examining the slippery relationship between language and social themes such as race. Among numerous possible references, the phrase “negro sunshine” reaches back to a stereotype described in a passage in Gertrude Stein’s novella “Melanctha” (“the warm broad glow of negro sunshine”). Rirkrit Tiravanija’s Untitled (Paul writing my name, No. 3) (2003) playfully emphasizes the arbitrary materiality of language in a shimmering neon sculpture based on the artist’s young nephew’s attempt at mimicking written symbols that he does not yet understand. This work relates to a collage by Nauman also on view in the exhibition, a study for the large-scale neon titled My Name as Though It Were Written on the Surface of the Moon (1968), which expands Nauman’s first name into a repetitive accumulation of letters. Two artists in the exhibition take their cue from Nauman’s first neon work from 1967, The True Artist Helps the World by Revealing Mystic Truths (Window or Wall Sign), which was originally inspired by a beer sign visible from his studio. Peter Coffin’s freestanding neon sculpture from 2004, Untitled (Line after B. Nauman’s The True Artist Helps the World by Revealing Mystic Truths), emphasizes its sculptural materiality, obliquely referencing an already destabilized textual source. The very same work by Nauman is explicitly referred to in Mungo Thomson’s bumper-stickers. Based on the design and content of the 12-step recovery program stickers often seen on cars in Los Angeles, Thomson “frames Nauman’s phrase in the vernacular of recovery and spiritual mantra, the one you have to keep repeating to yourself to stay on a difficult course.”[iv]

Much of Nauman’s work is playfully and critically engaged with the role of the artist in society and with art historical precedents. Seminal early works, such as the concrete A Cast of the Space under my Chair (1965-68) or the 1969 video of the artist Manipulating a Neon Tube evoke minimalism, while also making something of a mockery of its weighty seriousness. Nauman mocks the authoritative (and sometimes macho) role of the artist often taken on in the history of art. This is made evident, among other works, in his playful over-emphasis on the artist’s signature in neon pieces that exaggerate his own name, as well as in the above-mentioned video. In the exhibition, Charles Ray’s Plank Piece I – II (1973) similarly toys with the seriousness of minimalist sculpture by incorporating the artist’s own body into the work. Jan Mancusca’s 800 Ways to Describe a Chair (2004) elaborates upon Nauman’s cast chair piece, marking the negative space surrounding a chair with bullet holes.

Mancusca’s piece relates to some of the more explicitly social themes explored by Nauman. Many of Nauman’s works (ranging from neon sculptures such as Eat/Death (1972, included in the exhibition) to more recent work) address the fine line between games (or everyday activities) and violence, dealing with such themes as oppression and brutality. His works often explore the morals and attitudes of American culture, addressing societal taboos and contradictions. Nauman’s seminal Clown Torture Series videos are represented here with his No No, New Museum (1987), which shows a clown violently jumping up and down in a repetitive, aggressive action, thus subverting the familiar associations made with clowns. This series – and other works by the artist – explore the limits of decorum and human behavior, displaying and calling into question the violence that underlies much of contemporary culture. A cast wax sculpture from 1990 by Nauman titled Andrew Head/ Julie Head/ Rinde Head carries forth a number of conflicting associations, such as death and preservation. These cast heads relate formally to Nauman’s larger-scale sculptures made with the forms used by taxidermists to preserve the carcasses of hunted animals. Similar themes are echoed in the work of other artists in the exhibition, including Marc Swanson’s crystal-encrusted deer’s head; and in Mike Kelley’s stuffed animal sculpture Arena #2 (Kangaroo) (1990), which evokes a darker side to child’s play. Diana Thater’s video Shilo (1995) pits “raw” nature against the controlled and structured man-made environment, presenting camera shots of a trained wolf amidst the din of its trainer’s commands.

[iv] Mungo Thomson, in correspondence with the gallery, 2006.