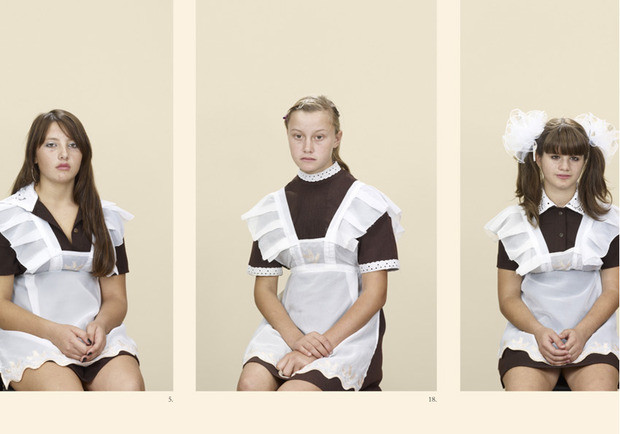 Almine Rech Gallery is pleased to announce the exhibition of the American artist Taryn Simon who will present for the first time in France her new series A Living Man Declared Dead and Other Chapters. This powerful, elaborately constructed photographic work was produced over a four-year period (2008–11), during which the artist travelled around the world researching and recording bloodlines and their related stories. In each of the chapters that make up the work, the external forces of territory, power, circumstance, or religion collide with the internal forces of psychological and physical inheritance. The subjects Simon documents include victims of genocide in Bosnia, test rabbits infected with a lethal disease in Australia, the first woman to hijack an aircraft, and the living dead in India.

A Living Man Declared Dead is divided into 18 chapters. Each chapter is comprised of three segments. The first segment is a large portrait series systematically presenting individuals directly related by blood. The sequence of portraits is structured to include the living ascendants and descendants of a single individual. Simon also shows empty portraits, representing living members of a bloodline who could not be photographed. The portraits are followed by a text panel, in which the artist constructs narratives and collects details about the distinct bloodlines. She also notes the reasons for the absences in the portrait panel, which include imprisonment, military service, dengue fever, and women not being granted permission to be photographed. The last segment is Simon’s “footnote” panel, comprising images that expand and locate the stories in each of Simon’s chapters.

According to Roxana Marcoci, curator at MoMA for the Department of Photography, “Simon’s major project locates photography’s capacity to at once probe complex narratives in contemporary societies and to organize the material in classification processes characteristic of an archive, a system that connects identity, genealogy, history, and memory.” Her collection is at once cohesive and arbitrary, mapping the relationships among chance, blood, and other components of fate. In contrast to the methodical ordering of a bloodline, the central elements of the stories—violence, resilience, corruption, and survival—disorient the highly structured appearance of the work. A Living Man Declared Dead and Other Chapters highlights the space between text and image, absence and presence, and order and anarchy.

Taryn Simon was born in 1975 in New York, where she lives and works. Her previous work includes ‘Contraband’ (2010), an archive of images of items that were detained or seized from passengers and mail entering the United States from abroad; ‘An American Index of the Hidden and Unfamiliar’ (2007), which reveals objects, sites, and spaces that are integral to America’s foundation, mythology, or daily functioning but remain inaccessible or unknown to a public audience; and ‘The Innocents’ (2003), which documents cases of wrongful conviction in the United States, calling into question photography’s function as a credible witness and arbiter of justice. Simon's work has been the subject of monographic exhibitions at Tate Modern, London; Neue Nationalgalerie, Berlin; Whitney Museum of American Art, New York; Museum für Moderne Kunst, Frankfurt; Kunst-Werke Institute for Contemporary Art, Berlin; and MoMA PS1, New York. ‘A Living Man Declared Dead and Other Chapters’ was shown in its entirety at Tate Modern, London (May 25, 2011–January 2, 2012), and Neue Nationalgalerie, Berlin (September 21, 2011–January 1, 2012). A Living Man Declared Dead and Others Chapters will be running from May 2nd to September 3rd 2012 at the Museum of Modern Art, New York.
www.galeriealminerech.com