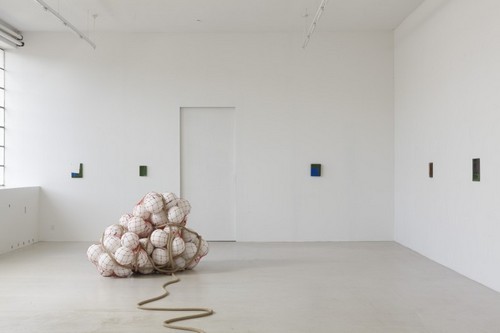 Exhibition view
SIMON DYBBROE MØLLER
"The Whole of It"

Dear Visitor
The Whole Of It is my first show at Andersens Contemporary, the 12th show I have ever done and my 3rd show this year. Thinking about it now, 10 days before it will open, it seems to be the final part of a trilogy that started with a show I did earlier this year entitled The Demon of Noontide. I realize that trilogies bear with them an aura of sovereignty. That it implies a certain overview. That is not what I am talking about. If anything this is a trilogy that has stumbled into existence. Anyway, The Demon of Noontide talked about boredom in its most cultivated state, as Ennui or Langeweile. Of a detached and motionless state. The second show had the impossible title Fast Flickering Black Bugs on a Bright White Background. This show dealt with the endeavour to start over while at the same time attempting (and failing) to do precisely that. So one could say that it acted out something while simultaneously declaring this very act impossible. To begin as if to begin. Now you are in The Whole Of It. The show, which could be the conclusion to this trilogy. In this show I try to present the things as they are. Floating freely. Dumb stuff. Random lots. Things that come together by their weight, their mass, their materiality or mere location. For example.
As I look around me at this very moment I see a mess. As you read these lines some of this stuff has been brought to Copenhagen to form the show you are in. I will try to imagine how it looks to attempt to guide you through it.
There are three pieces in the show. They look very different. This is intentional. Hence the title of the show: The Whole Of It. The seemingly random and disparate objects you see tied together on the floor are parts of The Norman Mailer Paradox (all works 2010). They are chosen and paired up according to one object’s ability to float vs. the other object’s weight. They are lying there, inanimate on the floor awaiting a flood. The painted objects on the walls, come from all over the place but are still related. They were piles that had developed on my desk before this very order, or lack thereof, dictated their becoming objectpaintings hanging on the walls of this gallery. The video at the rear end of the space, The Drift, is obviously mimicking a format known to us from public service art history programs, or perhaps its younger and impromptu relative that we know from YouTube. It contains a lot of information that you have very little chance of decoding, but which I will give away right here: the imagery pictures a grotto in the Boboli Garden in Florence. It is made in the style which art historians refer to as Mannerist and it depicts the moment after the flood in Ovid’s Metamorphosis. The soundtrack consists of Irving Berlin’s Alexander’s Ragtime Band and Archibald Joyce’s Songe d’Automne, two songs that were played while the Titanic was sinking. They are played on crystal glasses filled with water. Lastly the voiceover lists the objects, which had been posted for sale on the “General” category of Craigslist on the day I finished the film.
So back to the beginning. To the bold trilogy claim. Let me try and make that grand final statement:
The whole of it acknowledges history, and aesthetic considerations, but unlike the two shows mentioned above, it is neither disillusioned nor apathetic.I think it sets out to get rid of hierarchy. It speaks about sameness. About parallel-ness. And this is its claim, that it paradoxically is here in this muddle, in this disorder that we might be able to see clearly again.