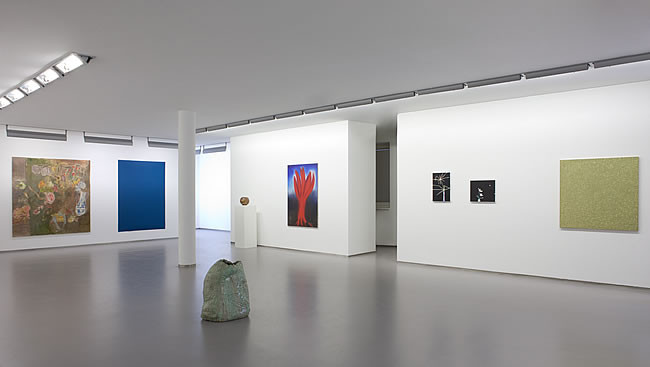 The exhibition ENDOSCOPIA Part 1 and 2 (Greek.: éndon ‚inside‘; skopein ‚to see‘) features 12 positions which, on the one hand, show the concrete (flower paintings), while on the other hand they present the monochrome in a wide variety of different artistic forms of expression. This “endoscopia” follows the interplay between motif and abstraction. Three partly fragile, narrative sculptures complement the exhibition.

Part 1: When Apollo accidentally killed Hyacinth with his discus in Ovid’s Metamorphoses, Apollo preserved his memory of his lover by creating a cyclic flower the color of blood out of Hyacinth’s spilled blood, thus giving the youth immortality („Sic fata cruorem / nectare odorato sparsit“). Ovid’s tale of metamorphosis, the mythical discussion of flower and death, has shaped the genre of still life painting in manifold ways. Far beyond the aesthetic aspect, flowers are not merely allegories, encrypted messages and a symbol of beauty, but also an expression of evanescence and death.

So Swann gently pulls his companion closer to calm her down and asks if he may adjust the flowers on her bodice. Carefully, he puts the cattleyas a little deeper down her cleavage so they do not fall out. (Marcel Proust, “Swann’s Way”)

Part 2: Is it also possible for the observer, then, to derive pleasure from seeing nothing? With the motif erased, completely surrendered to color, having lost all means of orientation, this is the question the observer might ask himself. When color becomes the content and subject-matter of painting, the cognitive senses are reversed from an often picturesque and poetic aspect to an almost completative, first-hand participation that follows magical aesthetics. Distanced, yet at the same time provocative, the monochrome spreads, leaving no chance of withdrawal to a motif. The abstract room, restricted by its lack of concreteness, resembles an enigma, throwing back the observer into a gentle inner perspective.
www.galerie-kugler.at