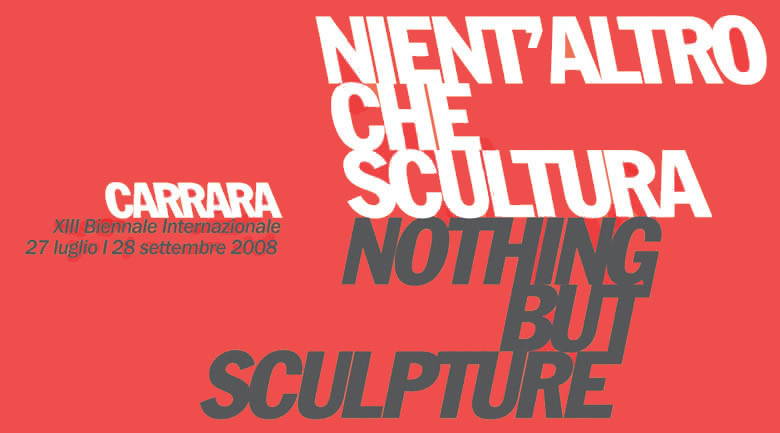 Curated by Francesco Poli
The 13th Carrara International Sculpture Biennial Nient’altro che scultura. Nothing but sculpture, curated by Francesco Poli, is divided into several sections: Homages, The Topicality of Marble, New Statues, Sculpture as a Living Body, In Town, Sculpting Time, and The Marble Workshops. The choice of the title underlines the specific character of this event, created in 1957, and it reasserts the tight link between the town and the production of sculptures.
The exhibition focuses on the most significant and innovative aspects of sculpture, giving rise to an in-depth reflection and to a more precise vision of the present situation in this creative sector, by comparing young emerging artists with artists of great renown.

On exhibition in the park are Eye-benches, two pairs of marble sculptures by the American sculptor of French origin. Almost 100 year old, she is one of the greatest living artists, a veritable icon of the international feminist culture.

The section New Statues showcases the Biomimetic Android FACE. This work is the result of an innovative project carried out by the Centro Interdipartimentale di Ricerca “E.Piaggio”, Facoltà di Ingegneria dell’Università di Pisa, IRCCS Fondazione Stella Maris Pisa and Accademia di Belle Arti di Carrara. FACE consists of a body with a realistic face created through biomimetic engineering techniques which will be used to actively interact with children suffering from autism.

Sculpture as a Living Body
Hosted in the museum, the third, smaller section is dedicated to some important video works where the artist uses the vital and plastic tension of his body (as well as those of others) as a fundamental means of expression. Works by the following artists are here on display: Marina Abramovic, John Coplans, Regina Josè Galindo, Joan Jonas, Paul McCarthy, Tony Oursler, and Ene Liis Semper.

Duomo di Sant’Andrea
Via del Plebiscito
The problem of the relationship between plastic works of art and urban spaces is analyzed in the ancient Duomo and in Via del Plebiscito, with articulate proposals beyond the traditional concept of placing sculptures outdoors.In this sense, various works differing in material, technique, form, spatial criterion for their placement, as well as in aesthetic and cultural concepts and intentions were deliberately chosen to be part of the exhibition.
Works by the following artists are on display:
Salvatore Astore, Mirko Basaldella, Botto & Bruno, Sergio Cervietti, Riccardo Galleni, Giacomo Manzù, Luciano Massari, Eliseo Mattiacci, Matteo Peducci & Mattia Savini, Saverio Todaro, Filippo Tincolini, Jelena Vasiljev, Luca Vitone.