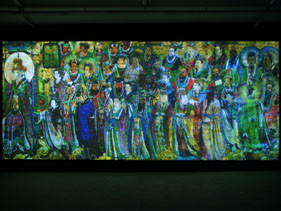 Boers-Li Gallery is pleased to announce that we will be hosting a Feng Jiangzhou solo project in our Gallery II space from 4 to 31 October 2008. The show, entitled Dharmaguptaka-vinaya: The Discipline in Four Parts, represents a mature dialogue with the discourses of phenomenological theory and relational space by the new media artist and legendary experimental musician.

Feng Jiangzhou, who initially studied art education at the China Academy of Fine Art, has consistently moved through and between China’s art and music circles for the past fifteen years, often presenting work that defies categorization and pushes the boundaries of the language of creative production in China.

Highlights of his career include participation in the groundbreaking rock band The Fly, noise ensemble Far East Digital Hardcore, sound work on the play Rhinoceros in Love, and countless other performances involving VJ work and sound installation.

For this exhibition, the artist will present two entirely new installation works, one interrogating the visual and one the aural. In the former, a projected digital image displaced from the religious murals of the Yongle Palace in Shanxi saturates one of the gallery walls. The space is otherwise dark and entirely silent. Slowly, the immortals and their entourage blink, their almost imperceptible movements often going unnoticed by visitors. The piece challenges the deadness of painting (especially that considered art-historical) while inserting a mediating layer of doubt into the viewer’s sense of the visual.

In the other piece, the viewer enters an entirely darkened space and sits down on a chair in the middle of a large iron cage. Speakers arranged in vertically-stacked circles all over the cage play spatially-active loops of the artist’s original compositions, emphasizing the location of sound and the displacement of any sense of origin. As with the visual piece, the viewer is led to doubt her own senses, while reconfiguring the dialogue of participatory art by calling attention to the passive reception of cultural material.