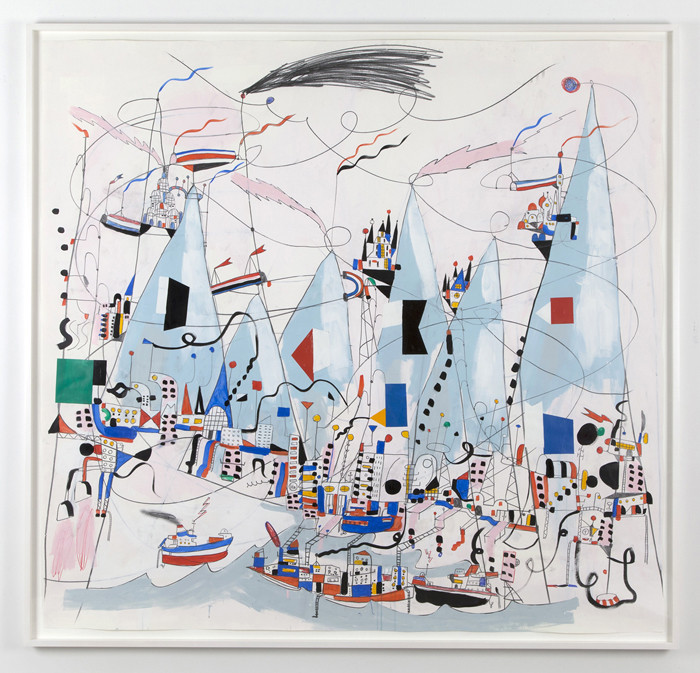 Casey Kaplan is pleased to announce an exhibition of new works by Nathan Carter (b. 1970, Dallas, TX.)

In new drawings and panoramic panel paintings, Nathan Carter has begun an investigation into an idea of the future that is the product of years of volatile urban growth. Heavy maritime salvage, mining, drilling, logging, pirating and an ever-expanding industry of data-mining operations have in effect created a new dynamic landscape. Built at high altitudes and by the water’s edge, Carter’s cities are populated by monuments to their own hubris, fragile towers topped with carousels, dilapidated dormitories, and take-away eateries veiling their dystopic nature with an exuberance that suggests a “bad business as usual” attitude. In response, the environment has become equally turbulent, battering the settlements with rogue waves, electric snowstorms and pink lightning, which amplifies mounting social tensions – verging on a state of industrial disaster and perpetual crisis.

Formal explorations remain central to these works. They represent equally an interest in the language of abstraction as they do a series of layered references to these precarious environments. Taking an approach that is both studied and jerry-rigged, Carter’s new works are an exploration in storytelling achieved through an experimentation with form and material. This interplay is highlighted in new sculptural works, where constellations of geometric forms are suspended in space and slowly reveal themselves as buoyant towers.

Similarly, Carter not only builds the cities of his drawings and paintings through his fictional narratives but also through the process of drawing itself. Flat planes, loose gestural marks and shapes are revisited and reworked, expanded and refined to give way to the structural foundations. In an almost cartographical approach, areas of color and form are first designated as mountains and rivers, then gestural lines become roads, aerial lifts and skyways before they are further developed into an infrastructure – buildings, bridges, tunnels, signal towers – intrusions from the crevices that constantly react with the abstract, invented landscape. In effect, Carter’s process mimics a refined stream of consciousness, creating systems that are perpetually in flux.