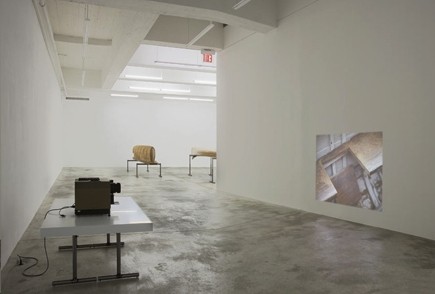 For his third solo exhibition at Casey Kaplan, Simon Starling continues to develop an interest in the fundamental building blocks of art practice, the stuff of making, and attempts to link particular materials to their geographical, political and cultural roots. Selected for their connections and contradictions, the exhibited projects all resurrect outmoded or obsolete forms of technology and link the micro world of the electron microscope, of chemistry and physics, to the wider world of objects and images, a world in which processes of creation and destruction, and energy and entropy appear inevitably linked. This constellation of works is typical of recent developments in Starling’s practice as they shift between process, erformance, sculpture and photography. Commissioned by Cove Park, Scotland, utoxylopyrocycloboros has its roots both in the pioneering development of steamboat technology in the Clyde Estuary and in the brooding presence of the Trident nuclear submarines based at neighboring Coulport and Faslane. Realized in October 2006, Autoxylopyrocycloboros began with a circular, entropic voyage on the waters of Loch Long. The boat that made the voyage, a 20ft long, clinker-built wooden craft named Dignity, built
around 1900 as a steam launch on Lake Windemere, was salvaged from the bottom of Loch Lomond by its previous owner and restored to working order. Newly fitted with a single cylinder, marine steam engine, Dignity served as both vessel and fuel for Autoxylopyrocycloboros as, piece-by-piece and plank-by-plank, the boat was fed to its own boiler. Like the age-old alchemical symbol for eternal renewal, the Ouroboros (the tail devouring snake), the boat, in an attempt to keep moving, consumed itself and ultimately returned to the deep, submarine infested waters of the Loch Long. The resulting work documents this event in 38 medium format transparencies exhibited on a resolutely mechanical projector. In Gold Toned Okapi, Starling utilizes existing source material to create a new series of photographic prints. Starling looked to Herbert Lang, a scientist and an accomplished field photographer who’s perhaps best known for producing the first
photographic images of the Okapi, an ancient relative of the Giraffe, while on a biological survey of North Eastern Congo for the American Museum of Natural History. The images of the creature were made in the Ituri region of the Congo, which is now infamous for its conflict over the regions’ gold deposits, which are mined in unregulated artesian mines, and illegally traded to American and European gold refiners. Lang’s photographs of the Okapi were produced using glass-plate negatives and printed using the then standard technique of POP (print out paper) printing. This method of printing requires a gold toning process to fix the image. In Gold Toned Okapi, Starling worked with a single image originally produced by Lang in 1913. The gold toner used to fix Starling’s images was produced using part of a 1oz bar of gold manufactured by the Swiss gold refiner, Metalor, who was recently found to be exporting large quantities of gold from Uganda - gold that has subsequently been traced back to traders in the Democratic Republic of Congo. Starling’s gold tainted photographs conflate different geographical points and moments in history, offering a subtle comment on recent international trade. Paralleling Gold Toned Okapi, Starling has transformed a traditional strip canoe (akin to those built in North America since the 1880’s that were in turn derived from the Native American birch bark canoe) by using African hardwoods in its construction. The resulting stripped markings on its exterior allude to the camouflaged skin of the Okapi. In this way, the work becomes a hybrid object: part African, part American, part working-canoe, part sculpture, part pantomime costume. While clearly referencing Lang’s Congo expedition, the canoe proposes a modern day journey out of New York, back up the Hudson River and beyond.
(CONTINUED)
Simon Starling was the recipient of the 2005 Turner Prize by Tate Britain, London, and was short-listed for the 2004 Hugo Boss Prize by the Solomon R. Guggenheim Museum, NY. A solo show at Städtischen Kunstmuseum zum Museum Folkwang in Essen, Germany opens in April 2007. His 2005 solo exhibition “Cuttings” which was on view at the Kunstmuseum Basel, Museum für Gegenwartskunst will travel to The Power Plant in Toronto in 2007. A solo show is also planned with M.I.T. & Mass MOCA, North Adams, MA in 2008. Other solo exhibitions include: Villa Arson Nice, France; MACRO, Rome, Italy; Dundee Contemporary Arts, Dundee, Scotland, and Museum of Modern Art, Sydney, Australia. The artist represented Scotland in the 50th International Exhibition of Art, Venice Biennale, Italy, 2003.