I Will Never Make It! 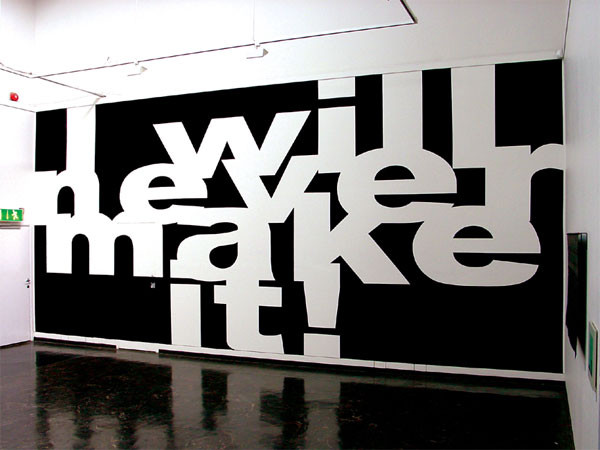 The feeling of never making it, never reaching a point and to finally fail for sure, those were the initial ideas that build the context to our upcoming exhibition. The title we borrowed from an art work by the Norwegian artist Jan Christensen. His wall painting states in massive letters: I Will Never Make It!

The plausibility of failure is overwhelming. Given enough time the survival rate drops to zero - in every respect, and it applies to everyone as well as everything. Especially for artists the subject of 'failure' is a very important issue. Through modernity the artist has been considered a marginal group within society, a misunderstood genius that would finally be granted understanding and respect after his death.

In our contemporary world, things are slightly different. Our needs and wishes are more immediate. Still the artist remains a fringe person in our society; hardly acknowledged or approached beyond the confines of its studio, of art institutions or the collections - only rarely is he publicly heard.

Thus in our third group show we are drawing our attention to the myth of a misunderstood and marginalised artist figure, who is leading a life off the mainstream society.

Another take on the concept of not making it will be to have a look at the social and cultural meanings that are implicated in the title of the show. Is there a guaranty within the modern welfare structure that one will lead a good life?

All exhibits but one (John Cage: Lecture on Nothing) were made in the new millennium. Many of them deal directly or indirectly with the role of the artists. All of them take the chance of failure into consideration, but are equally open towards the chance of succeeding.
On the final day of the exhibition, April 8, there will be nothing to say. John Cage’s pivotal piece Lecture on Nothing, 1949 will be read out loud in the gallery at 8 pm. Although the lecture's content deals with silence, repetition and eternity it has an aspect of impossibility in it – the piece is hard to listen through. Not because it is loud or particularly noisy, but rather due to its repetitious cycle of statements like “More and more, I have the feeling that we are getting nowhere” over a long period of time. The lecture will be held in English.
www.d21-leipzig.de