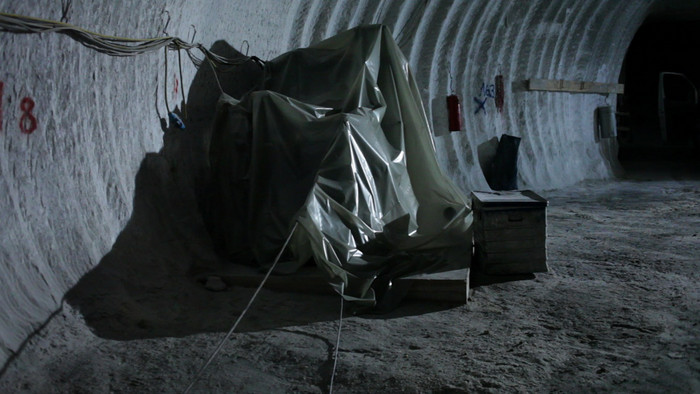 With the title „Soft ground illumination,“ the daadgalerie presents the first solo exhibition of Caner Aslan with works completed during this year’s short stipendium in Berlin. Aslan’s works are based on extensive text or image research. Using collage techniques and appropriation practices, he often works with photographs or existing found materials, which he then employs in his works, consisting of various media. At the 5th Berlin Biennale, he showed a series of posters called Joke Posters & Tip Posters (2007) at the Neue Nationalgalerie and at the Skulpturenpark.

The focus of the „Soft ground illumination“ exhibition is the film Repositories (2010, 12 min) which the artist filmed at the mine shafts of a former salt mine and today much-disputed facilities for the storage of nuclear waste Asse II. The film takes a look at the storage of atomic waste in the form of a quasi-touristic tour and while the story evolves – besides elaborating on technical information – the problems and mishaps of storing nuclear waste are hinted at. The camera scans the rock formations of the walls of the former salt mine with quick takes of the technical operations of an atomic waste facility. At times reminiscent of science-fiction takes, Caner Aslan montaged in shots of Istanbul’s world famous archaeological museum. In this way the film contrasts two places of preservation of the leftovers of civilization that serve as potential „warehouses“ of history for cultures-to-come.

In English, „soft ground“ indicates the fragile underground on which, for example, particularly strong damage might occur during an earthquake. The slide-show series Hari (2010) with images from the city Hattuša, the capital city of the 12th century BC extinct Great Hittite Empire, points to the complex and experimental methods of archaeology, such as, for example, the reconstruction of the city walls based on found ceramic models. The imagination of two extensively elaborate methods of preserving cultures, the possible failure of these procedures, as well as the destructive potential of cultures are summoned up here in the juxtaposition of the archaeological excavations and the underground atomic waste facility.

Caner Aslan was born in 1981 in Malatya in Turkey. He was a guest artist of De Ateliers in Amsterdam in 2006/07. In 2008, he took part in the Berlin Biennale and presented a project for the frieze art fair in London. Aslan has participated in numerous international group shows such as „Offspring,“ De Ateliers, Amsterdam (2008), „Relative Positions and Conclusions,“ Suriye Pasaji in Istanbul, „Straw Poll“ in Salford, UK (2009); „My Voice Weapon of Choice,“ Kasa Galeri, Istanbul and „When ideas become crime,“ Depo, Istanbul (2010).