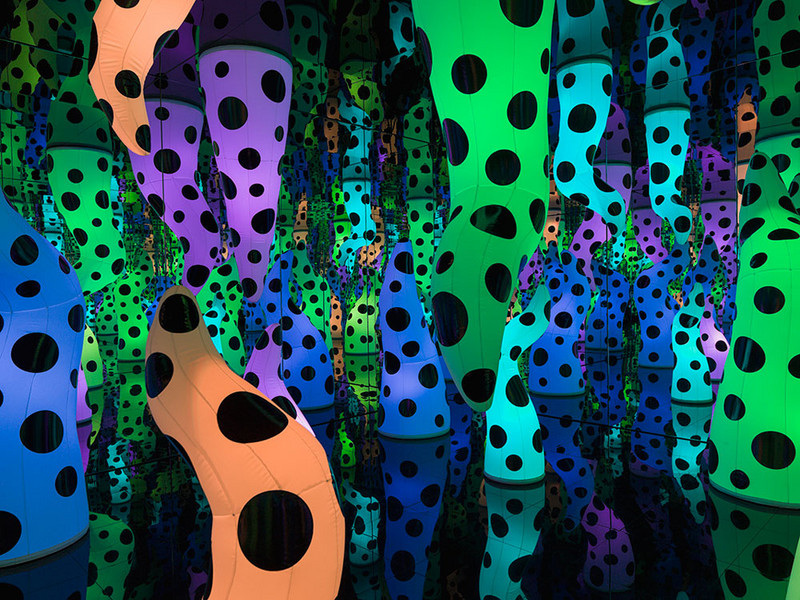 David Zwirner is pleased to present I Who Have Arrived In Heaven, the gallery’s inaugural exhibition with Yayoi Kusama. Spanning the gallery’s three consecutive locations on West 19th Street in New York, the exhibition features twenty-seven new large-scale paintings alongside a recent video installation and two mirrored infinity rooms, one of which is made especially for this presentation.

Yayoi Kusama’s work has transcended two of the most important art movements of the second half of the twentieth century: pop art and minimalism. Her extraordinary and highly influential career spans paintings, performances, room-size presentations, outdoor sculptural installations, literary works, films, fashion, design, and interventions within existing architectural structures, which allude at once to microscopic and macroscopic universes.

The exhibition’s title, I Who Have Arrived In Heaven, reflects the artist’s long-standing interest in cosmic realms and resonates with the autobiographical element that runs through her oeuvre. The recent and new works on view at the gallery continue her innovative exploration of form, content, and space, while at the same time presenting a link to her artistic production from the past six decades.

For the exhibition, Kusama has created a series of brightly colored, square-format paintings, the majority of which measure over six feet. Part of a recent body of work, they allude to universal spheres or basic life forms and highlight her unique amalgamation of representational and non-representational subject matter. Whereas Everything About My Love depicts a sea of biomorphic shapes, some personified with faces, The Way to My Love and Searching for Love present innumerous eyes, varying in size and proximity, bisected by arteries filled with round, colorful forms. Rows of human profiles are repeated to rhythmic effect in such works as Women in the Memories and Pensive Night. Vibrant, animated, and intense, the paintings transcend their medium to introduce their own pictorial logic, which appears both contemporary and universal.

The exhibition’s centerpiece is Kusama’s newest mirrored infinity room. Shown here for the first time, Infinity Mirrored Room – The Souls of Millions of Light Years Away encompasses a cube-shaped, mirror-paneled room that features a shallow reflecting pool as its floor. Hundreds of multicolored LED lights are suspended at varying heights from the ceiling. They flicker on and off in a strobe-like effect, producing an intense illumination of the space and a repetitive pattern of reflections that suggest endlessness and ultimately invoke concepts of life and death.

Another mirrored infinity room, Love Is Calling, stands as one of Kusama’s most immersive, kaleidoscopic environments to date. It is composed of a darkened, mirrored room illuminated by inflatable, tentacle-like forms—covered in the artist’s characteristic polka dots—that extend from the floor and ceiling, gradually changing colors. A sound recording of Kusama reciting a love poem in Japanese plays continuously. The work was shown earlier this year in Tokyo as part of a group exhibition commemorating the Mori Art Museum’s 10th anniversary. The gallery’s presentation marks its United States debut.

Also exhibited is Manhattan Suicide Addict, a recent video projection in which the artist herself is seen performing a song she composed, while an animated slideshow of selected artworks moves behind her. Drawing its title from her first semi- autobiographical novel published in 1978, the video was produced for the 17th Biennale of Sydney in 2010. It is installed in the gallery flanked by two twelve-foot tall mirrors, further enhancing the video’s psychedelic effects as well as infinitely reflecting the image of the artist and her artworks. Along with the mirrored infinity rooms, it exemplifies the vitality of Kusama’s optical environments, which become hypnotic and self-referential, merging concepts of flatness and depth, presence and absence, transience and permanence, and finiteness and infinity.

Following the exhibition, the gallery will publish a fully illustrated catalogue, which will include installation views as well as new scholarship by Akira Tatehata, Director of The Museum of Modern Art, Saitama and President of Kyoto City University of Arts.

Born in 1929 in Matsumoto, Japan, Yayoi Kusama joined David Zwirner in early 2013. Since her first solo show in her native Japan in 1952, the artist’s work has been featured widely in both solo and group presentations. Her latest exhibition in New York was the critically acclaimed retrospective hosted by the Whitney Museum of American Art in 2012. Organized by Tate Modern, London, it was previously shown at the Museo Nacional Centro de Arte Reina Sofía, Madrid and the Centre Georges Pompidou, Paris.

Kusama’s work is currently the subject of three major international museum exhibitions. Yayoi Kusama: A Dream I Dreamed is a solo exhibition of over 100 recent works traveling through Asia, which was recently displayed at the Daegu Art Museum in Korea. It will tour through 2015 to the Museum of Contemporary Art Shanghai; Seoul Arts Center; Taipei Fine Arts Museum; National Gallery of Modern Art, New Delhi; as well as other Asian venues shortly to be confirmed.

Yayoi Kusama: Infinite Obsession tours Central and South America through 2015. Consisting of over 100 works created between 1950 and 2013, this exhibition opened in June 2013 at Malba – Fundación Costantini in Buenos Aires and also set a new record attendance for the museum. It is now hosted by the Centro Cultural Banco do Brasil, Rio de Janeiro (through January 20, 2014), followed by the Centro Cultural Banco do Brasil, Brasília; Instituto Tomie Ohtake, São Paulo; and the Museo del Palacio de Bellas Artes, Mexico City.