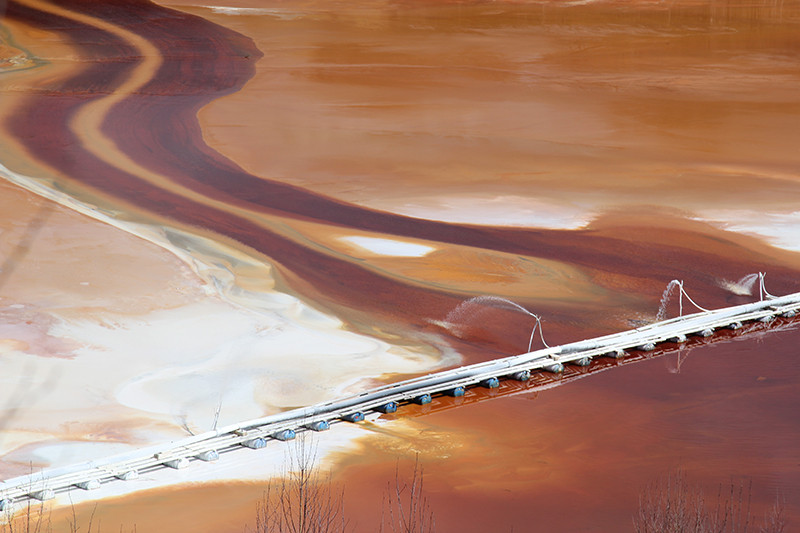 Mona Vatamanu & Florin Tudor - Still from 'All That Is Solid Melts Into Air, 2013.
For their first institutional presentation in Belgium, the Romanian duo Mona Vatamanu and Florin Tudor exhibit an ensemble of two new films and an installation – complementary elements in a critical investigation of ecological mismanagement, human and non-human rights, and the ways in which these are bound with picturing how the world might end.

Both films can be read as either local case studies, surveying the symptoms and effects of democratic transition in Romania, or within a universal perspective, as allegories of environmental destruction and economic war, as counterpoints to the political slogans of responsibility towards the planet and towards the underprivileged.

It is this broader perspective that materializes in the artists’ installation at Extra City Kunsthal: a ‘poor’ cosmology, a representation of the known universe as if constructed by those deprived of everything but bread. Modeled in dough, planets and their stars constellate on zigzagging pieces of string, and metaphorically conjoin the breadth of imagination and a precarious existence. Somewhere between an image of the cosmos and a makeshift, vacant Panopticon, the installation is conceptually organized around the Declaration of Human Rights, printed on bags of flour. Abstraction and embodiment, erosion and sustainability relate therefore to both ‘our world’ and ‘our rights’: the twinned notions of modern humanism and modern ecology, both relying on an endangered view of global accord.

The video 'All That Is Solid Melts Into Air' revisits the mining site at Rosia Montana, in Northwestern Romania, rich in gold and rare metals. A Canadian corporation advertises its plans for extraction via a pompously optimistic public relations campaign, contrasting direly with the footage this film builds upon. Rosia Montana, where mining began in pre-Roman times and that was the site of relentless exploitation after the ‘70s, looks strikingly like the Hollywood image of another, uninhabited planet, where all signs of dwelling have been submerged in residual, reddish waters.

'The Unblinded' departs from a report on the attempt of the Romanian Orthodox Church to secure a national monopoly of the manufacturing of candles, depriving, among others, a blind persons’ association of their only source of income. In the film, we see a young blind woman being taught to make candles in a workshop that trains people with disabilities. Operating ironically around the concept of illumination, The Unblinded reproduces at an individual scale the disparity between those who need and those who grant salvation, between fragile life and insidiously deadly rhetorical or economic constructs.