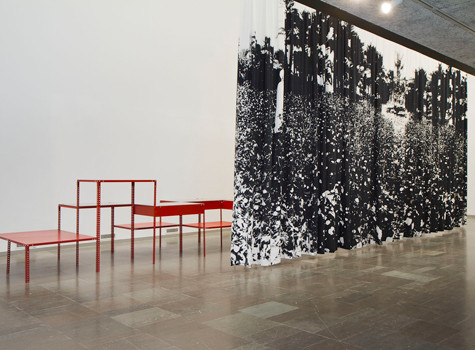 This fall, Extra City Kunsthal presents an interesting mix of artistic enquiry and local talent. With Cross-Examinations, ECK looks at four case studies, engaging questions of artistic responsibility and agency in a reflection of art’s capacity to diagnose a historical moment or condition. The judicial procedure of the cross-examinations is considered here as model for the ways in which art establishes and negotiates ‘truth’.


The first cross-examination will be co-curated by Dean Inkster and Sébastien Pluot, in collaboration with Mihnea Mircan. Anarchism Without Adjectives is the third iteration of a research project that debuted at CAC Brètigny and continued Artists Space New York. The central figure is the North-American artist Christopher D’Arcangelo (1955-1979), and the project concentrates on his work over the last four years of his life. The centre of his practice was an examination of the role of the artist, the status of the artwork and the institutionalization of art. The cross-examination happens in three parts: on the 14th and 15th September, ECK organizes a symposium at which the work of D’Arcangelo will be scrutinized both artistically and theoretically. The second part is an exhibition in which new and old work by contemporary artists interpret the oeuvre of D’Arcangelo. The last, concomitant part exists as a series of interviews with artists and critics, like Benjamin H.D. Buchloh, Daniel Buren and Lawrence Weiner) who knew D’Arcangelo and can interpret his work and its impact on art history.

Anarchism without Adjectives
A desire for a radical democratisation of the production and reception of art motivated D'Arcangelo's institutional critique. He voiced this in a statement on anarchism which accompanied, in various stencilled and typewritten forms, the majority of his actions and interventions. The statement, which contains an ellipsis between brackets [...] in the place of an adjectival definition of anarchism, recalls the historical expression “anarchism without adjectives”. Coined in the late 19th century, this phrase was first used in Spain as a call for an unhyphenated form of anarchism, in an attempt to overcome the differences between mutualist, communist and individualist political and economic doctrines.

An oral history
Although interest in D'Arcangelo has not been entirely absent over the last thirty years, to date, no posthumous exhibition or critical evaluation of his work has been undertaken. The written and visual documents which D'Arcangelo compiled over a five year period, in order to chronicle his practice, have only recently been made available at the Fales Library & Special Collections, New York University. Given the paucity of existing commentary on D'Arcangelo's work, and the lapse of time since it was produced, the exhibition will present a series of specially commissioned video interviews. Intended to form an oral history of the artist's work and practice, the series includes interviews with Stephen Antonakos, Benjamin H. D. Buchloh, Daniel Buren, Ben Kinmont, Peter Nadin, Naomi Spector and Lawrence Weiner. In addition, documentary material will be both made available to the public and commented upon by the invited artists.