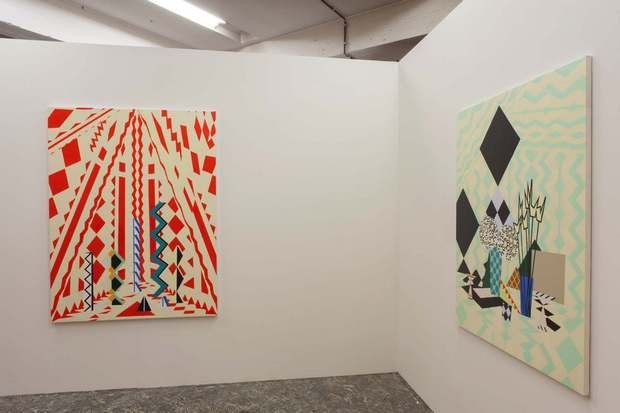 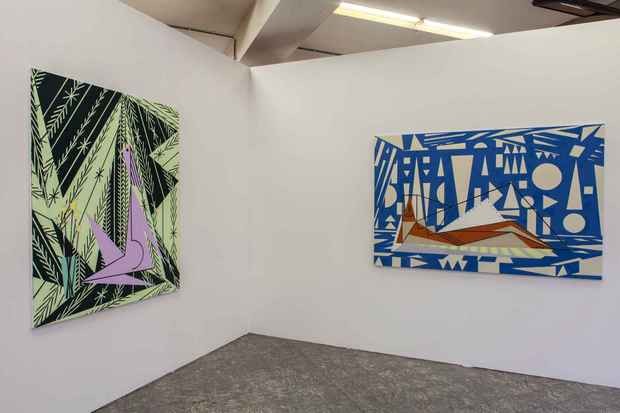 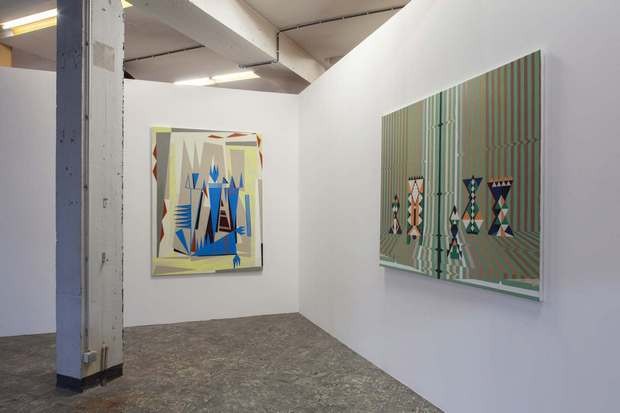 Extra City presents the first institutional show in Belgium of Farah Atassi (b. 1981 in Brussels, lives and works in Paris). Constructing environments through intricate scale distortions of modernist forms, traditions of mosaic or folkloric textile patterning, many of Atassi’s paintings create a disorienting sense of ‘display’ for figures that are barely differentiated volumetrically from their surroundings. Figures camouflaged as grounds and vice versa, deceptive mirror effects and decentered vanishing points – these are devices to incite attention to an enigmatic theatre of objects and fluid perspectives, to models for objects, sculptures and architectures, to place and sitelessness.

Atassi’s particular alphabet of forms and spaces includes stylistic nods to Léger, Matisse, Malevich, Mondrian, Charles & Ray Eames or set designs in Expressionist cinema. These coproduce a re-alignment of ornamental motifs and architectural interiors in her work: an expanded understanding of décor, of the ornamental assuming a structural role in organizing a picture. It is perhaps in this sense that the ‘trompe l’oeil’, or maybe more aptly camouflage, could be a productive notion in examining her canvases, as they conceal the old in the new (through a calculated indistinction of ‘the traditional’ and ‘the modern’), as well as the armature in the surface. Motifs – both those employed to delineate the scene or to pose as its protagonists – appear alternatively as having been stitched or pasted onto a surface to which they barely adhere, or conversely peeled out of it, organizing the surface as an armistice of competing perspectives and resolute flatness.

As Atassi notes in a recent conversation with curator Guillaume Desanges, she practices a “figurative painting that represents abstractions”. The spaces in her works are poised between an ostensible artificiality and plausible inhabitation, between the law of gravity, the markers of functionality and the suggestion that their modular parts could be reassembled in a different configuration of ‘up’ and ‘down’, ‘in’ and ‘beyond’. The presentation at Extra City focuses on a recent, ongoing series of works, but also includes examples of paintings realized over the course of last year. Older and newer works articulate an abstract narrative of depth and proximity, guiding perception in a move from the panoramic to the close-up.

In this dialectic, the Modernist repertory of forms and spatial solutions is generic and specific at the same time: reduced to its instrumentality and appearance of efficiency, anonymous and serviceable, it becomes a toolbox for constructions and re-constructions, for spaces assembled, pulverized and reconstituted. Her work is animated by a two-directional syntax that pieces together states of order and chaos, moments of stasis, uncertainty and transformation. Modernist ‘figures’ are profiled against the ‘ground’ of a world-image, where ‘progress’ is part of a nexus of trial, error and imagination. Seen from this vantage point, Attasi’s turn to the avant-garde is neither a melancholic archeology nor the creation of post-modern, ironic hybrids. Rather, her project employs the modern vocabulary in contrasting movements of building and un-building, sketching timelines that go into the past as into the future.