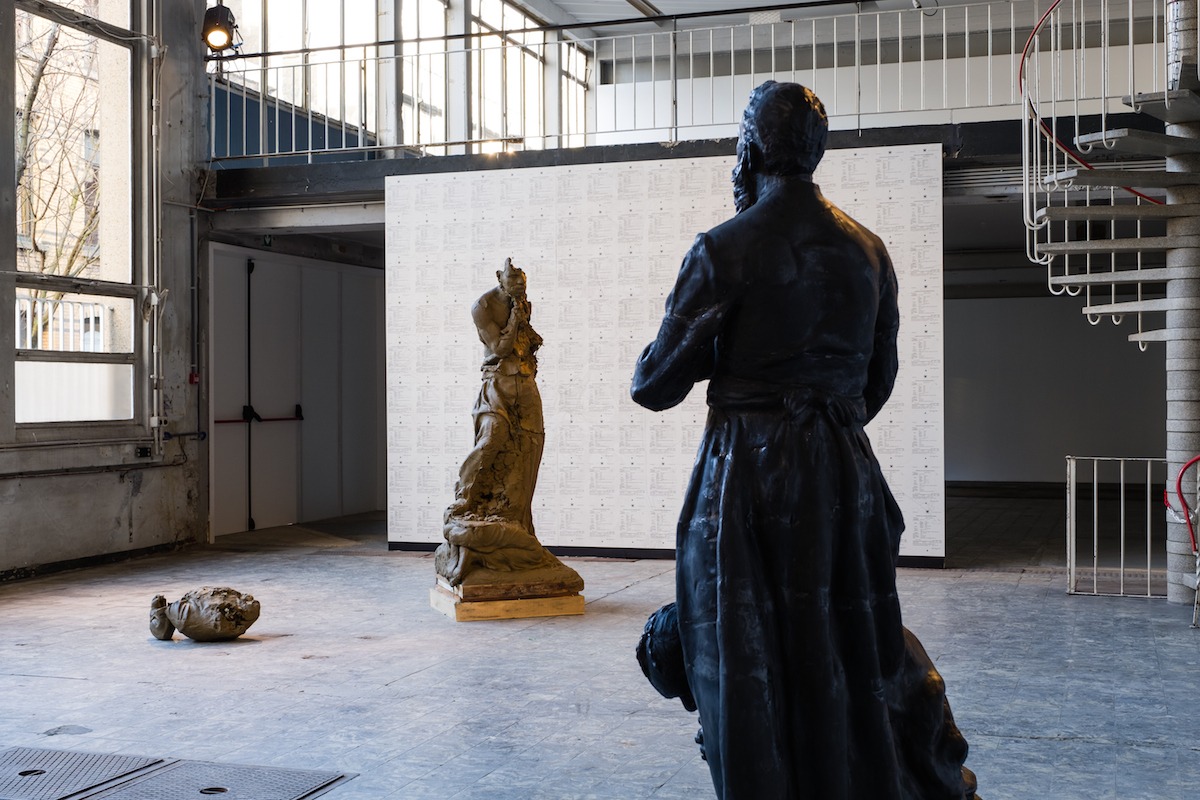 Does history cease to exist when a memorial is removed from public view and civic sanction – or is that act of removal, a forceful repudiation of the past, itself an act of choice and agency in history? [1]

The recent events of Charlottesville (US) [2] encouraged again an urgent debate on mainstream media about the racist and colonial monuments that adorn our cities. Monuments and memorials of colonial and imperial legacy that are rarely contextualized still stand in public space and have not been combined with counter perspectives that would allow for a narrative that is more adherent to the truth about the events or the people, which the sculptures represent.

On Monumental Silences by Ghanaian artist Ibrahim Mahama is a response to the presence of these types of monuments, in many cities in Belgium and Flanders, and to their messages full of racism, white supremacy, imperialism and patriarchy. By engaging with the infamous monument of Father De Deken in Wilrijk (by Jean-Marie Hérain and erected in 1904), this project will confront the audience with the values and propaganda this image still performs and inspire a reflection on how such an image could be transformed. On Monumental Silences brings to the fore not only the need to re-challenge the narratives monuments bear, but also the question of how to actively intervene, by considering which subjects continue to be denied a voice, a place in history and a representation, what side of the events is missing a story. While the shoot is largely and overwhelmingly visible, where can we find the counter-shoot? As Ray Minniecon, an Aboriginal student at Murdoch University, stated “Monuments are not just a window into our past; they are a window into ourselves. We can choose.” [3]

The project will commence on January 16th with a performative and participatory action by the artist. A soft clay copy of the monument of Pater de Deken will be modified, reshaped and re-imagined together with the audience and in a moderated discussion with historian, diversity and inclusion expert Omar Ba. History will become a malleable matter to act upon and reshape towards a future counter-monument to that of Pater de Deken.

On Monumental Silences, by Ibrahim Mahama, marks the first act in a series of interventions within a three-year collaboration, developed between the curatorial team of Extra City and that of the Middelheim Museum, which aims to critically re-assess the function of monuments today.

In addition to the Middelheim Museum, this project is made possible thanks to the generous support of APALAZZOGALLERY, Brescia. We thank also AIR Antwerpen for their cooperation.

[1] Paul Daley, Statues are not history. Here are six in Australia that need rethinking, The Guardian, August 24, 2017. Find more here
[2] Started in August 2017 when a group of white supremacists who had gathered to protest the removal of the statue of Robert E. Lee (a Confederate soldier in favor of slavery) violently attacked counter protesters.
[3] Ibidem.
www.extracity.org