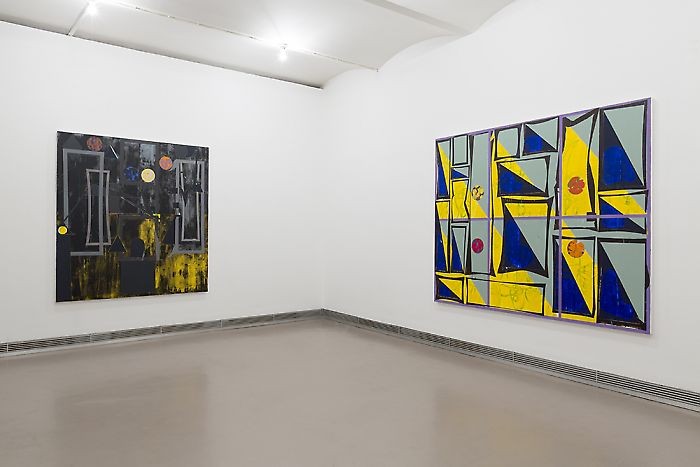 In the first half of the twentieth century, abstract painting was predominantely characterized by a reductive program. According to some of its critics, this was meant to lead to enhanced purity so as to culminate in a deobjectified and dematerialized image. Such painting was posited within a progressive scenario that would inevitably reach a point of culmination. Although this conception of abstraction is questionable—being that it does not represent the only leitmotif of the painting of the time, nor is it really inherently conclusive—it is nevertheless the point of departure for discovering contemporary positions in abstract painting. What remains open after the last abstract picture? The monochrome canvas cannot be reduced any further. Yet instead of simply being put aside, the problem was pushed further in various forms. In the meantime, by way of mediating techniques of reproduction and alienation, the figurative likeness arrived at a point where it could even be read as abstraction since it appeared to have dissolved in its seemingly endless repeatability. Andy Warhol and his relationship with Abstract Expressionism is a perfect example of this, but also Gerhard Richter’s paintings of the standard color palette. With dematerialization perhaps not working out so well, minimalist painting was able to avail itself of a modern abstract language of form, while simultaneously bringing color and framing back into the image. Conceptual art, which was originally conceived as anti-painting, was able to access the painted image, for instance through the formal parallelisms of typography and abstract form. Installation art has likewise latched onto the picture, so to speak, and thus associated it with sculpture and its materiality. Over the years, the forms of modern abstraction have naturally become part of the world around us; through architecture and the functional design object, they have even become a part of the landscape. When they thus return to the picture, new meaning is generated, with their abstraction possibly no longer correlating with reality.

The antiquated image of painting repeatedly conveys the idea that (perhaps together with sculpture) it is situated at the center of artistic production, with everything else built based on or against it. Again and again it becomes an island of nostalgia, shielding itself against everything that developed in the course of modernism, or before. While the gate to the past may delight many an art historian, it remains far removed from contemporary art. The continuation of abstraction outlined above clearly contradicts this understanding of painting, as we notice how this medium can react to and elaborate on other mediums and art currents. It was modern abstraction that developed a reduced and clear vocabulary, which can serve as a starting point for investigations that integrate ideas originating outside of painting. Painting is based on considerations related to conceptual art, pop art, minimalism, installation, et cetera. But this doesn’t mean that traditional problems within the painting medium remain untouched. The formal aspects cannot be separated from the content-related ones. Minimal changes in the grammar of modernism can result in drastic consequences on both levels. Blurriness along the edges of a geometric figure or a brief gestural moment that pierces an otherwise clear division of space intensifies the image with completely new content. The blending or superimposition of various reductive aspects of abstractness engender meanings that are not decipherable within the former context. These additions are only comprehensible within the history of the past sixty years, and the references extend far beyond painting. Abstraction had previouszly been a goal-oriented project that was designed to permanently establish the hegemonic position of the painted image within the realm of art. Yet this logic also caused painting to become isolated and then to only follow internal regularities. Additive abstraction implies that there is always an opening to a closed room. The inventory of form stays strongly limited, but even the smallest changes within this firmly set canon give rise to a powerful language. The frugality of this language is purely ostensible. Its symbols are not only those visible in the image, for the points of reference actually lie elsewhere, which is why they do not harbor their own autonomous grammar.

The works of Will Fowler (born in Winston-Salem, NC, 1969) have their origin in the deconstruction of the two-dimensional visual surface. In earlier works, actual sculptures were brought out of the surface into the space or the canvas frame itself was moved as an object into the space. This three-dimensionality is also continued in the new works, but only using means that are directly applied to the canvas. Here, there are overlappings that through form and texture generate an object-character in the image. The forms are borrowed from a grammar of modernism and minimalism, and yet their multilayered combination generates sites of insecurity of vision; the density of impressions allows for no endpoint.

Herbert Hinteregger’s (born in Kirchberg in Tyrol, 1970) art shows a path from conceptual considerations to the perception of the image. Here too, materiality is used to generate an unrest or refusal of categories that seems to contradict the forms of the pictorial surface. The decision to work solely with standard ballpoint pen ink or using a certain material as a foundation, situates the images outside our standard perception and thus lends it the character of an object defined by the tactile. This technique turns abstraction inside out, for the result is not a reductive clarity but a perceptual ambiguity that generates tension. In Hinteregger’s work, painting is often accompanied by installational considerations.

Chris Johanson (born in San Jose CA, 1968) also cannot be reduced to painting, but in a somewhat different sense. Drawing, installation, and sculpture play entirely equal roles in his work. The various formal elements seem like different individuals that appear repeatedly in new roles over the course of a large narrative. Abstract forms are not only mixed with figurative ones, they also appear alongside or on top of them. In so doing, Johanson also engages in an ironic game, for behind every non-figurative work a figurative meaning is concealed. Abstraction is thus defined as its own history; it is a building block with a figurative meaning. Often, it condenses to the midpoint of the image, then again dispersing things in all directions. The distance that the artist builds up to the history of art is not left alone as a joke. For this, the stage is too full, the result is ultimately a gesamtkunstwerk scenario of great density. In so doing, abstraction is added.

Manuel Knapp (born in Wolfsberg in Carinthia, 1978) belongs to a generation of artists that cannot be reduced to specific media: rather, he incorporates in his painterly practice considerations from other realms in a self-evident fashion. The use of sound and installation makes his painting a building block in an expanded field alongside its autonomous status. In the images shown in the exhibition, at issue are film formats and the medium of film in itself: What at first looks like a reduced, abstract black and white composition becomes upon longer inspection the visual field of a technical medium, the surface of the paintings transports the vulnerability and fragility of the material. Painting and its traditions of perception are used to negotiate the specifications and the materiality of an entirely different medium.
www.georgkargl.com