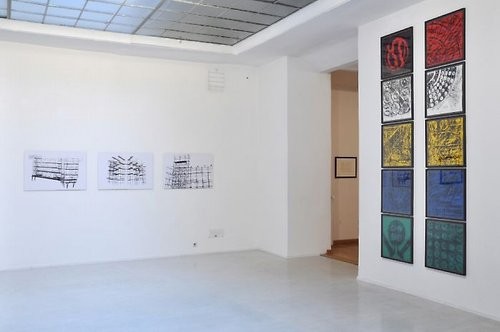 In this exhibition, Georg Kargl Fine Arts explores the state of contemporary drawing. What can drawing be and what does it achieve? Keeping in the spirit of the disappearance of borders between genres and media, this exhibition also presents installations, sculpture, and film, questioning the medium itself and showing that it does not necessarily require the use of a pen or pencil. Hardly any other genre in the realm of contemporary art has in recent years undergone a comparable social or technological transformation, as a result taking on a completely new importance. The drawing has increasingly become autonomous: limits in terms of genre, material, or concept increasingly dissipate. The line has noticeably emancipated itself, becoming autonomous and departing from a constricted, spatially limited format. It achieved its modular unity, whereby the possibility of fully new linkages emerged and the development of new conceptions of the image was advanced.

The exhibition Fine Line is not only intended to present a snapshot of the various developments of drawing in relation to other media, but also is to offer a contextual insight into the various realms of drawing’s application. The spectrum of works included here stretches from works from the 1960s to current positions: younger, upcoming artists like Wolfgang Plöger, Nadim Vardag, Andreas Fogarasi, and Marcel van Eeden are set alongside international art figures such as Fred Sandback, Bruce Nauman, Raymond Pettibon, Ketty La Rocca, and Matt Mullican. In addition, studies and models clarify the development process behind modes of artistic expression and their contexts.

Beside political and social questions, the works here also engage with influences from popular culture and the comics. Select examples engage with the space, sometimes in quite far-reaching ways: the use of the potential of disembodied sculpture, spatially expansive formations, and transparent projections create spaces and objects on the limit of visibility. The critical interrogation of the link between the media image and physical space expand it as well as its perception without concealing or capturing it.

The group show Fine Line relies on the dialog of individual gestures in drawing, and, in a heightened concept of plurality along with a subjective mise-en-scene is able to set new accents for new linkages and associations in order to develop a feeling for changes in the current conception of drawing.