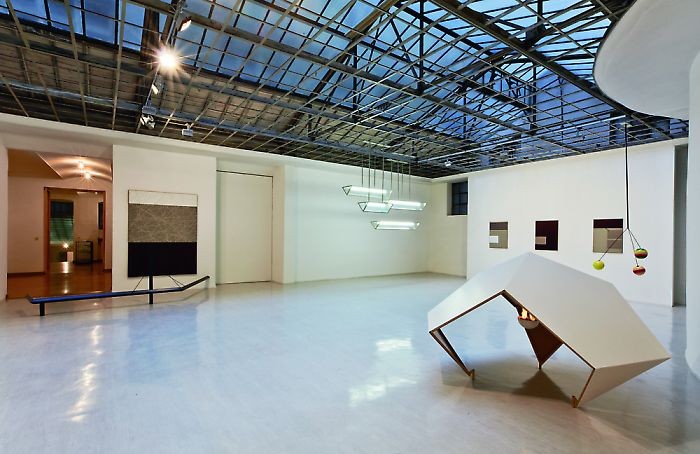 In “A sense of disquietude concerning the existing order of things,”[1] Georg Kargl Fine Arts shows for the first time an exhibition that emerged as a collaboration between Belgian artist Koenraad Dedobbeleer (born in 1975) and the Austrian artist Herbert Hinteregger (born in 1970). The feeling referred to by the exhibition title not only moved the two artists to close collaboration, but also creeps upon the visitor upon walking through the broad, complex spaces of the gallery. The two artists move intermediate spaces, voids, everyday occurrences, which are apparently incidental and often fall beneath our usual threshold of perception, to the center of their artistic engagement. Together they develop a refined, multilayered series of references that refers to surprising commonalities and media intersections and opens a dense network of associations. They mark and alter the exhibition space through minimal, but effective interventions and subtle installational positionings and make it available to experience as a constantly changing space of action that counters existing systems of reference and standard patterns of perception, at the same time opening new ones.

Immediately upon entering the gallery, wooden scaffolding thrusts itself in the way of the visitor, reflecting in its material and dimensions the given architectural relations of the façade and directing the movements of the visitor along consciously staged pathways. Koenraad Dedobbeleer’s massive object, perfect in terms of its craftsmanship, is the result of an analysis of site-specific historical conditions. It questions the relationship between the exterior and the interior, stages problems like reality and model, coding and context at the intersection of autonomous sculpture and the everyday object. The disturbing spatial intervention serves, as it were, as the entrance into a playful laboratory of the two artists that is full of allusions, art historical references, and ironic commentaries. For example, Dedobbeleer balances a reconstruction of a Gerrit Rietveld chair painted in red ink by Hinteregger on a wood plinth that in its proportions and material execution corresponds to the gallery windows. Freed of its usual use value and placed in an absurd position on an ennobling pedestal, the artists affirm and yet counter in a humorous way the standard practices of presentation and mediation of art and design objects. In the tradition of institutional critique, they thus direct their attention toward institutional functions and structures with their aesthetic, economic framing conditions.

In colors and forms reduced to minimal elements, Hinteregger has for years consistently engaged with the constructive aspect of using material. Thin strips of adhesive tape spread out like a web on the partially glazed canvas and form a grid structure upon which the artist places monochroamatically geometrical fields of ink. The ink obtained laboriously from squeezed out ballpoint pens is applied in differing densities on the canvas, forming subtle structures which, depending on the standpoint of the beholder and the way the light falls, imply a sense of permanent movement. Iridescent surfaces of ink reflect the surroundings, opening as it were into the space and contrasting with the raw, structured canvas and the dully-grounded sections that absorb light and bind it back to the surface. The eye of the beholder is denied any fixed point of reference. It is kept in motion and tends to follow the painting across the actual limits of the image into the space and at the same time keeping to the limits of the canvas upon perceiving the exactly drawn outlines. Hinteregger’s works are neither this nor that; they are both at the same time. They are both abstract as well as figurative when they reflect the work of Josef Hoffmann in their geometrical surfaces; they are both painterly as well as constructive, and confirm the visual field while also transgressing it.

In combination with Dedobbeleer’s minimalist objects, a playful as well as poetic arrangement emerged that subscribes to the tradition of light-hearted appropriation, interconnection, and allusion, and that always reflects the architectural and historical givens of the exhibition space. Under the spiral staircase, Dedobbeleer has placed metal rods crowned by an umbrella-like cardboard object just in the exact place where Dan Flavin’s fluorescent light work For Ad Reinhardt was presented at the gallery’s opening exhibition in 1998.

The Circular Character of Reasoning is not a reconstruction of a Flavin sculpture without a function, that due to the cardboard object looks like a standing lamp; it is an autonomous sculpture that reflects beyond the practice of appropriation, in an elegant way questioning the autonomy of art works in their dependence on their spatial, historical, and thematic contexts.

When the artists deicide to include a black, mechanically-made metal grate by the artist Andreas Fogarasi without comment in their exhibition, this can be read like a sculptural translation of one of Hinteregger’s grid pictures, they also make it clear that the concept of artistic autonomy and originality have long been replaced by the ideational construction of components free of hierarchies and origins. Hinteregger/Dedobbeleer impressively comment in the gallery’s skylight space on the fact that artistic production is never solely based on individual imagination. Indeed, in the current cut and paste culture it is more than ever based on methods of appropriation, quotations, and (re)contextualization. Hinteregger entitles his action of removing the entire ceiling glazing to emphasize the pattern and the network structures that run through the entire exhibition like a thread Untitled (Man braucht nur das Getane Fortzusetzen). This quotation from a text by Ad Reinhardt (1929) was understood as a challenge to take the idea of including the glass ceiling in the exhibition context—an idea that had already been pursued by other artists—to the utmost. The space opens impressively upward and makes the otherwise hidden architectural occurrences and details of the industrial space of the former printing house visible, as if the spirit of the over 100-year-old history of the building had inscribed itself.

Koenraad Dedobeleer’s objects, like the metal lamps hanging at different heights and colorful ceramic balls, or the dwelling-like, constructivist floor sculpture, seem in this historical environment like a time capsule from an uncertain period, and in combination with Herbert Hinteregger’s exact, finely iridescent canvases grant new meaning to the “sense of disquietude concerning the existing order of things.”

[1] From, The Studio, 1906, “The Art-Revival in Austria,” “revivals in art spring from a sense of disquietude concerning the existing order of things: they are the strivings after truer and nobler ideals.“
www.georgkargl.com