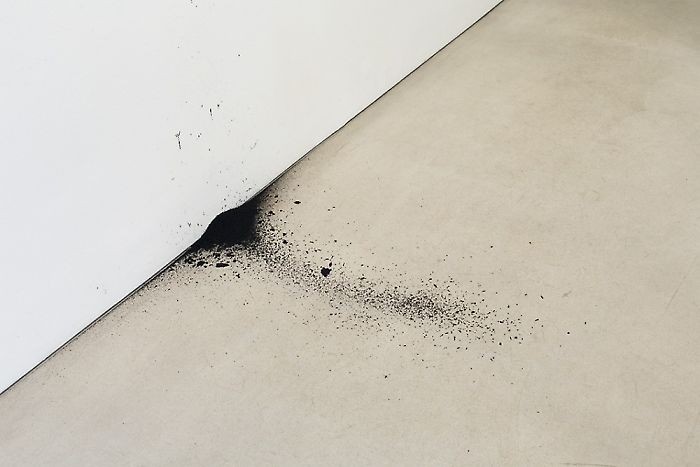 Fast-slow, loud-quiet, offensive-defensive, maximal-minimal—it would seem that a show combining works by the German artist Michael Sailstorfer and the Austrian artist Herbert Hinteregger could be primarily described using dichotomies.

Indeed, the works of the internationally renowned installation and object artist Michael Sailstorfer often exude an overpowering directness that is difficult to escape. Street lamps are shot over a field from a Mercedes transformed into a catapult, police cars are transformed into percussion instruments, trees meters high hang upside down from the ceiling and sweep the floor, driven by a motor, or a lantern revolves around a blue globe made from an old city bus. Sailstorfer deconstructs, deforms, adapts, and reassembles objects of everyday life in new constellations of meaning and spatial contexts. In so doing, he is interested in the specific stories of the everyday objects used, so that beyond their deconstruction and deformation they are able to trigger a multilayered network of associations. An absurd, oft melancholic comic aspect is almost always inherent in the objects that result. It is almost as if one could trace Sailstorfer’s sentimental endeavor to defy a world that has become complex through the excess of consumer items by way of simple, understandable installations. Access to the works is more shaped by a playful, light pragmatism rather than by highly complex experimental ideas. Despite their aggressive directness, the results are often sculptures with a poetic feel that by including movement, sound, or smell address several senses at once and like organisms come alive expand in the space, indeed take hold of it entirely.

In contrast, the minimalist paintings of Herbert Hinteregger seem initially to play on a quieter claviature. Since the mid-1990s, the Austrian artist has been developing his own idiosyncratic vocabulary of geometric abstraction that has led from grid and network structures with numerous overlappings and breaks, leading to his currently rigorous vertical arrangements of stripes. Whereas Hinteregger experiments with various materials like white or black primer, sandpaper of diverse grains and colors, and different supports such as canvas, burlap, jeans or colored sackcloth, since the beginning of his work ballpoint pen ink has been the dominant material used. In a long and very slow process, the ink dripped from thousands of Bic ballpoint pens is applied in numerous layers to the support with an amazing exactitude. The individual surfaces are set sharply apart from one another using strips of tape that after the end of the painting process are in part removed. The concentrated application of paint not only enables relief structures but a uniquely iridescent surface that makes color variations of light and shadow perceptible. Construction by way of the deconstruction of an industrially made mass product, whereby Hinteregger is not primarily interested in the destructive act, but in the gentle conveyance of materials into a new context and constellation of meaning.

The first joint exhibition of Michael Sailstorfer and Herbert Hinteregger at Georg Kargl BOX reveals not only the differences described at the start, but also astonishing commonalities. Using the height of the exhibition space, Sailstorfer installs an electric motor high above our heads that constantly powers the spinning of a car tire and presses it against the wall. With a permantent engine noise and the acrid

smell of burning rubber, the tire is slowly worn away and leaves a fine rubber dust on the floor. On the front wall of the space, Hinteregger in contrast has placed a monumental, finely structured stripe picture on a white wall pedestal so that it is markedly askew. The cube seems to grow directly from the wall, corresponding in its size to the painting, fusing with it and forming it into an object. At the same time, Hinteregger thus both affirms and counters the traditional practices of presenting of art and design objects.

Zeit ist keine Autobahn (Time Is No Highway) is the absurd sounding title of Sailstorfer’s work. Assuming that highways are primarily connoted with speed and considering the extremely slow process of wearing away thee tire, Sailstorfer seems to have had in mind a poetic reflection on dimensions of time and its perception in mind as well as the metamorphosis of things in the world. In Hinteregger’s stripe pictures, time in contrast plays a constructive role, whereby not only a process of artistic emergence but also a process of reception is intended, which, the longer it lasts, leads to surprisingly sensual effects, overlappings, and soft vibrations, comparable to the resonance of strings on a harp.

Should the commonality then be sought in a shared sentiment, an almost romantic longing for the domination of an increasingly complex technologized world that drives the pragmatist Sailstorfer to literally leave traces behind and the sensualist Hinteregger in his self-imposed limitation to flee the world of hurried and hectic consumerism? Actio est reactio according to Newton’s Third Axiom, or the law of action and reaction: forces always manifest themselves in pairs and it is only in the combination that the whole is more than the sum of its individual parts.