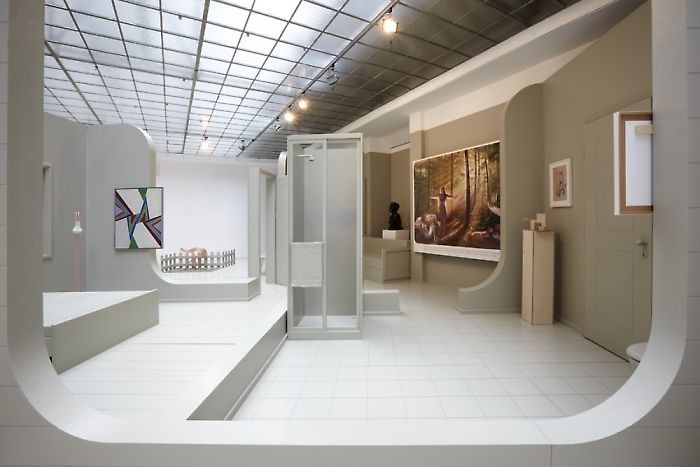 In Will Wright’s famous computer game “The Sims”, which has become one of the world’s best selling titles, the player is presented with a bird’s eye view into a standard American detached family house and the simulated people living therein. This synoptic perspective turns the player into an omnipotent god with the power to watch his beings and interfere with their simulated lives from above. Many facets of the game resemble those of a training simulator for contemporary consumer culture, since its goal, namely to keep the Sims happy, can only be reached by organising them in such a way that they earn increasing amounts of money which, in turn, has to be spent on consumable goods, from furniture and decoration to clothes, electric household appliances to books and even fine art. The consequential relation between happiness and the never-ending stream of novel items, services and goods, that has become a backbone of contemporary capitalist society, could not be expressed more bluntly. Furthermore, contrary to the Baudrillardian view of the suspension of ideology in the age of simulation, it could be argued that game simulations are hyper-ideological phenomena since all possible actions are literally embedded into the world. In other words, the player has no choice but to base actions on one belief system or another since his or her actions as well as their consequences are already entirely prescribed by the code.
Muntean/Rosenblum have chosen “The Sims” as a model for their installation in the entire space of Georg Kargl Fine Arts. Design elements – such as the particular rounded shape of interior walls that emerge from the specific point of view in the game, plants from the exterior front lawn as well as parts of the digital furniture – are turned into sculptural elements which form a coherent whole.

By actualising the virtual game space and positioning it as a display for contemporary art Muntean/Rosenblum are returning to a decisive practice within their artistic career. During the 1990s they realised a series of environments, ranging from a desert setting, via a stage for video productions to a sculpture resembling the viewing apparatus of a submarine, which worked as exhibition spaces for the artworks they had curated specifically for the respective settings. This approach allows them to reflect the historical implications of exhibition spaces and enables a highly complex and finely tuned control over the web of relations set in motion by their thematic and architectural choices.
In combination with the title Nemesims, which relates to the Greek godess of revenge responsible for the punishment of human hubris, this environment, takes a very precise critical stance. What makes the Sims game so compelling is that its narrative delivers instant omnipotence in a universe defined by (illusory) consumer choices and the never-ending update of surface elements. The adaptation of this cultural signifier not only enables Muntean/Rosenblum to position the precise commentary one has come to expect from their paintings and film pieces, it also extends to a recontextualisation of the function of the exhibition space, thereby affecting all the other artworks displayed within.