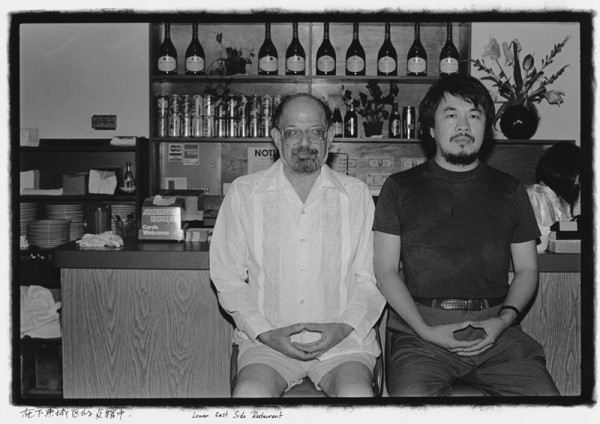 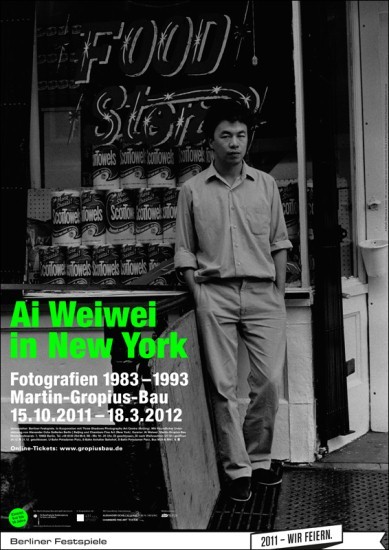 For the first time in Germany, the Martin-Gropius-Bau is showing more than 220 photographs from the period 1983 to 1993 spent by Chinese artist Ai Weiwei in New York. More than 10,000 photos emerged during this time. Ai acted as curator selecting what will be exhibited. For the young Ai, born in 1957, this extended period of stay in the USA was very influential on the style of his future artistic works. After being in New York, Ai first of all returned to China as his father, the very famous author Ai Qing whose poems every Chinese schoolchild learns by heart, was on his deathbed.

Today, Ai Weiwei is one of the most famous Chinese artists of contemporary times. While living in New York, he became friends with Allen Ginsberg. Many artists who are now famous in China visited him there and Ai photographed them. He became familiar with the works of Joseph Beuys, whose ideas on Social Plastic are recognisable in Ai's work today. Andy Warhol was also an influence.

Ai was not yet famous back then in New York, living in a tiny apartment in the East Village. He was an active member of the Chinese community of artists and intellectuals in the area’s avant-garde scene. In the 1980s, New York was a place of freedom from the repression that artists from China had experienced in their home country. After the death of Mao Zedong in 1976, the situation became a little more relaxed for China’s artists, but the country was, and continues to be, governed by rigid notions of what art should be like and about whom art is to serve.

Ai captured life in the New York of the eighties with his camera. The result is a series of unique documents bearing witness to an artistically and politically exciting period seen through the eyes of an artist from China. And the viewer can already recognise the beginnings of Ai Weiwei’s concept art in these early photographs. The subjects are varied like life in New York – photos of street fights in Tompkins Square Park, transvestites at the Wigstock Festival, portraits of Chinese and American artists, intellectuals and friends.

The photos lay around forgotten for many years. Thousands of not yet developed negatives remained hidden from view in old cardboard boxes. In 1993, following Ai Weiwei’s return to China, he told the Chinese artist Rong Rong about them and it is thanks to him that Ai agreed to an exhibition at the Three Shadows Photography Art Centre in Beijing in the year 2009. In the summer of 2010, a first publication appeared in China with the support of Christophe W. Mao and funded by the Mattawin Company.

Ai Weiwei was curator of the first presentation in Beijing, assisted by Rong Rong and the artist inri, and the exhibition was shown without any changes at a second show New York. The Martin-Gropius-Bau in Berlin has taken on the exhibition design by Ai Weiwei. The photographs come together to make up an artistic installation that retraces the personal experiences, thoughts and impressions of the artist.

Ai Weiwei was born in 1957, the son of the writer Ai Qing. When the writer fell out of favour with the Communist regime in 1958, he was sent into exile in Xinjiang. Ai Weiwei experienced the humiliation of his father in this province, some 3,000 km away from Peking. Father and son were first allowed to return to Beijing in 1978. That same year Ai enrolled in the film academy in Beijing, where he studied film together with the meanwhile renowned film directors Chen Kaige and Zhang Yimou. In 1979, together with a number of colleagues, he founded the avant-garde artists’ group “Stars”, who during this period of reform wanted to have nothing to do with the official art policies of the State. Ai took part in the famous “Democracy Wall” that was set up in the centre of Beijing in 1978. Wei Jingsheng, then 28 years old, who now lives in exile in the USA, spoke out on the wall posters for a “Fifth Modernization” – more democracy and more individual liberties. However, the “Wall” was forbidden at the end of 1979 because the Communist Party was afraid of losing its monopoly of power. Wei was sentenced to 15 years in prison. He was only allowed to leave the country in 1997 for exile in America after the USA exerted pressure. Ai Weiwei lived in the USA between 1981 and 1993 and studied in New York at the Parsons The New School of Design. In 1993 he returned to Peking, where he has been living since that time. Ai has never giving up the critical stance of his earlier years. When Liu Xiaobo was awarded the Nobel Peace Prize in 2010 after having been sentenced to ten years of detention in 2009 for demanding more democracy and individual rights, Ai Weiwei, who knows Liu quite well, praised the decision for the award as encouragement for all people in China who speak out for fundamental human rights.

Ai has always understood his art as political: concept art, performance, photography – the breadth of the forms of his artistic expression has helped to make him China’s most important artist. Duchamp, Dadaism, Social Sculpture and Andy Warhol have influenced him. His blog has been turned into a successful book in Europe and America. His exhibitions in the USA, Europe and Asia are legendary. He became popular in Germany through his participation in documenta 12 in the year 2007. His work is represented in the most important museums in the world: the Tate Modern in London, the Museum of Modern Art in New York, the State Museums in Berlin as well as museums in San Francisco and in Los Angeles.

When Ai Weiwei was arrested in April at the Beijing Airport for subversive artistic activities and held in detention for 80 days in a secret prison, a great outcry arose from the art world. More than 140,000 people signed a petition launched by the Guggenheim Museum in New York. Alexander Ochs and Friends initiated a Berlin appeal called “Freedom for Ai Weiwei”, signed by more than 4,000 people in Germany, including Günter Grass, Durs Grünbein, Rosemarie Trockel, Norbert Bisky, Tobias Rehberger and many other writers and museum workers. The Akademie der Künste in Berlin elected Ai a member of the academy. Prominent artists such as Daniel Buren, Olafur Eliasson, Luc Tuymans and Anish Kapoor demanded his release. Meanwhile Ai Weiwei has been allowed to live in his studio in Beijing, but is not permitted to speak with the press or to leave the city. Ai Weiwei is still not free. Wei Jingsheng recently commented in the New York Times on the situation of artists and others in China: the rule by law in China is still the arbitrary rule of law of the state authorities.

The exhibition of Ai’s photographs from his time in New York deals with the beginning of his artistic career.
The 336-page catalogue is published at Distanz Verlag, Softcover, 28 x 28 cm, in German/English/Chinese. It contains reproductions of all of the displayed photographs as well as essays and interviews. The museum edition of the catalogue costs 28 €, the bookstore edition 39,95 € (ISBN 978-3-942405-50-8).
www.gropiusbau.de