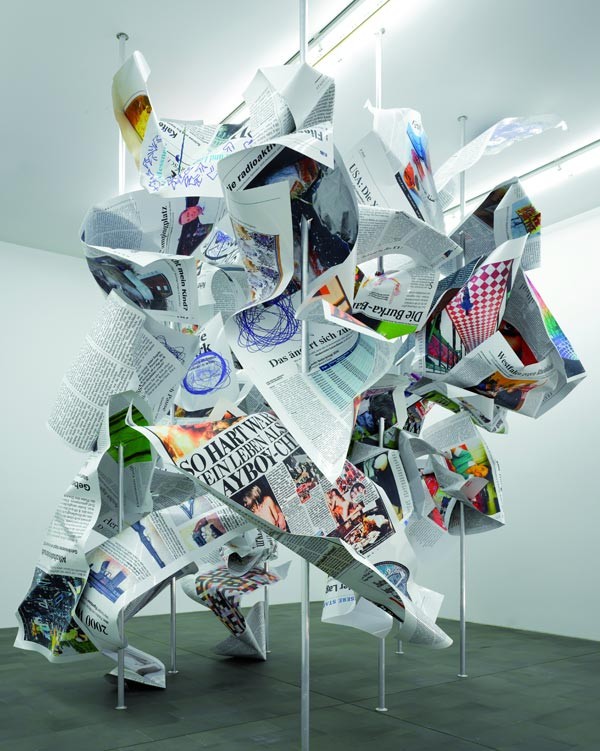 The newspaper has served as material and subject matter for art since the mid-19th Century. Artists deal with this medium in many ways, whether in its function as an instrument of information or of manipulation. The motivations and meanings behind the use of the medium are always different. The exhibition ARTandPRESS shows over 50 artistic positions on this issue, by Andy Warhol, Robert Rauschenberg, Joseph Beuys, Sigmar Polke, Gerhard Richter, Anselm Kiefer, Ai Weiwei, Julian Schnabel, William Kentridge, Richard Prince, Annette Messager and Rirkrit Tiravanija among others.

Many artists have created new work especially for the exhibition or have selected pieces from their oeuvre. Anselm Kiefer, for example, shows his view on the subject of media change in a large installation in the central atrium of the Martin-Gropius-Bau. The young Iranian artist Farhad Moshiri deals with the subject of censorship with his installation "Newsstand". In their series of paintings "London Pictures", Gilbert & George pose questions on the production of news and the truth by quoting headlines. Ai Weiwei has created an installation of steel reinforcements especially for the exhibition. The material for this comes from earthquake-damaged school buildings, under which around a thousand pupils were buried - the steel serves as evidence in search of the truth, which was not allowed to be reported in China.

ARTandPRESS is a project initiated by the Foundation for Art and Culture in Bonn under the artistic direction of Walter Smerling. Among those serving on the expert advisory council are Götz Adriani, Heiner Bastian, Siegfried Gohr, David Hornemann von Laer, Peter Iden and Norman Rosenthal. Hans-Joachim Petersen is responsible for the coordination.

ARTandPRESS is supported by the sponsor RWE AG. Its media partner BILD has devoted unique coverage to the theme by extensively featuring the participating artists and their works.

Accompanying the exhibition is a comprehensive catalogue, published by Wienand Verlag.
www.gropiusbau.de