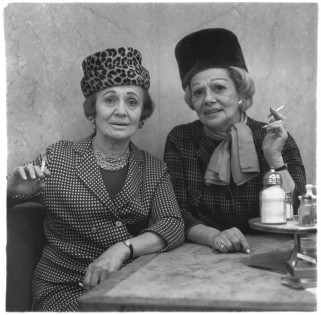 ORGANIZER An exhibition by Jeu de Paume, Paris. In association with The Estate of Diane Arbus LLC, New York and with the participation of Martin-Gropius-Bau Berlin, Fotomuseum Winterthur and Foam Photography Museum, Amsterdam.

Diane Arbus (New York, 1923–1971) revolutionized the art she practiced. Her bold subject matter and photographic approach produced a body of work that is often shocking in its purity. Her gift for rendering strange those things we consider most familiar, and for uncovering the familiar within the exotic, enlarges our understanding of ourselves.

Arbus found most of her subjects in New York City, a place that she explored as both a known geography and as a foreign land.

She was committed to photography as a medium that tangles with the facts. Her contemporary anthropology—portraits of couples, children, carnival performers, nudists, middle-class families, transvestites, zealots, eccentrics, and celebrities—also stands as an allegory of the human experience, an exploration of the relationship between appearance and identity, illusion and belief, theatre and reality.

The Martin-Gropius-Bau presents a selection of two hundred photographs that afford an opportunity to explore the origins and aspirations in the photography of Diane Arbus. The exhibition shows all of the artist’s iconic photographs as well as many that have never before been publicly exhibited.

The final rooms of the exhibition are devoted to extensive biographical and critical documentation of Diane Arbus’ life and oeuvre.

Rather than a chronological, thematic or academic approach, we have chosen to present Arbus’ singularly powerful images accompanied only by the artist’s own titles so that each viewer encounters the images much as the photographer encountered her subjects: directly and unencumbered by preconceptions.
www.gropiusbau.de