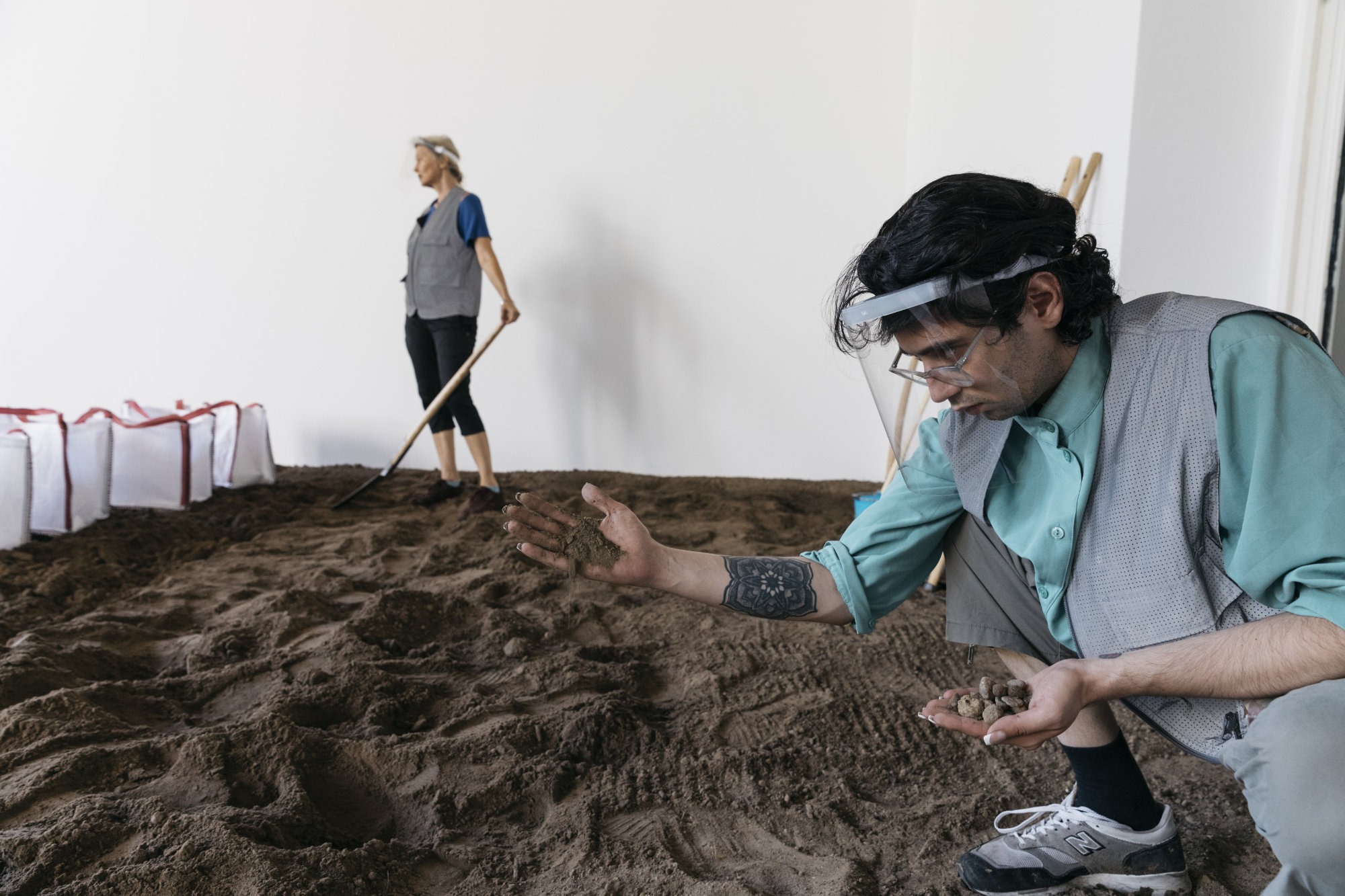 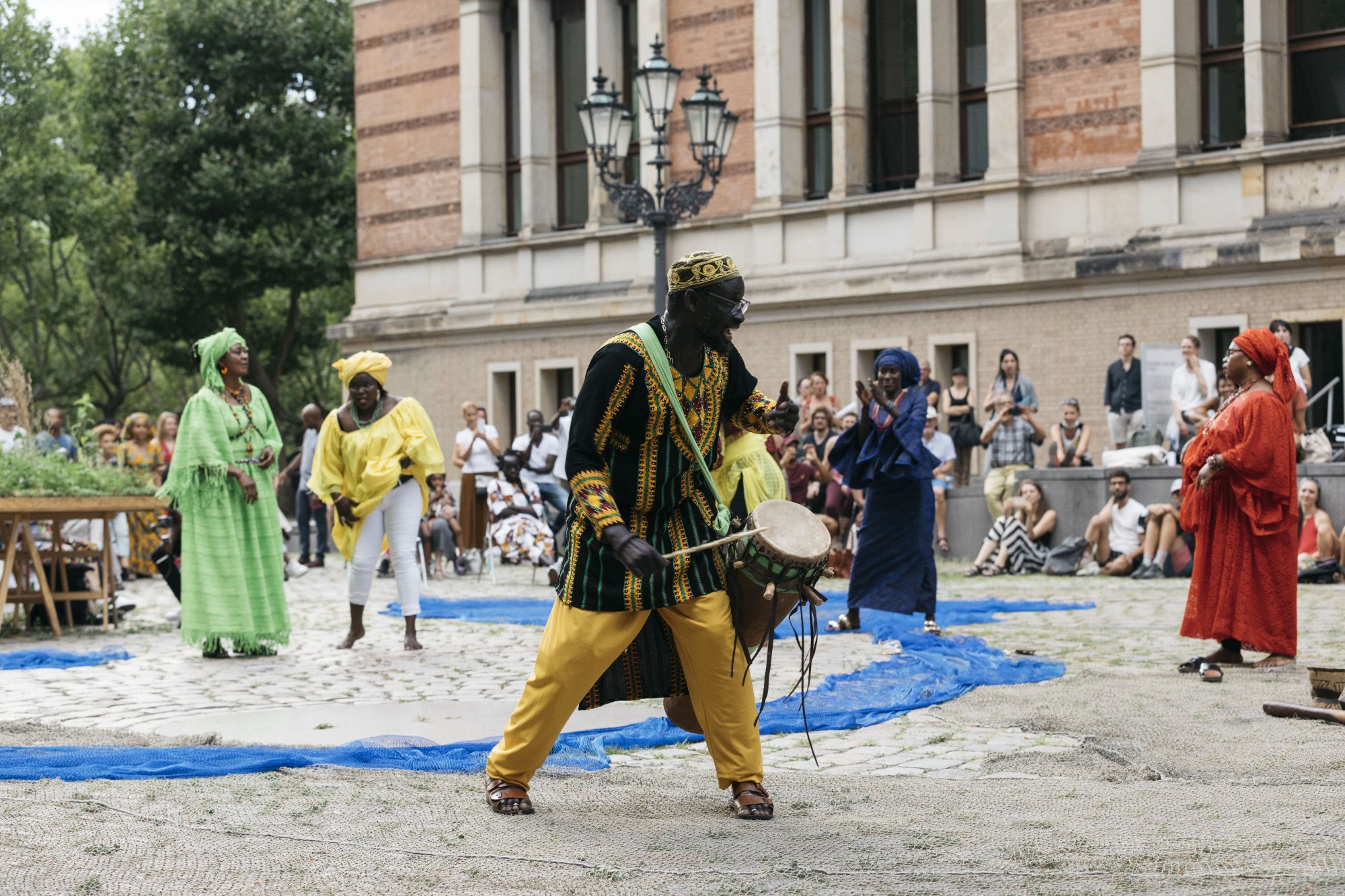 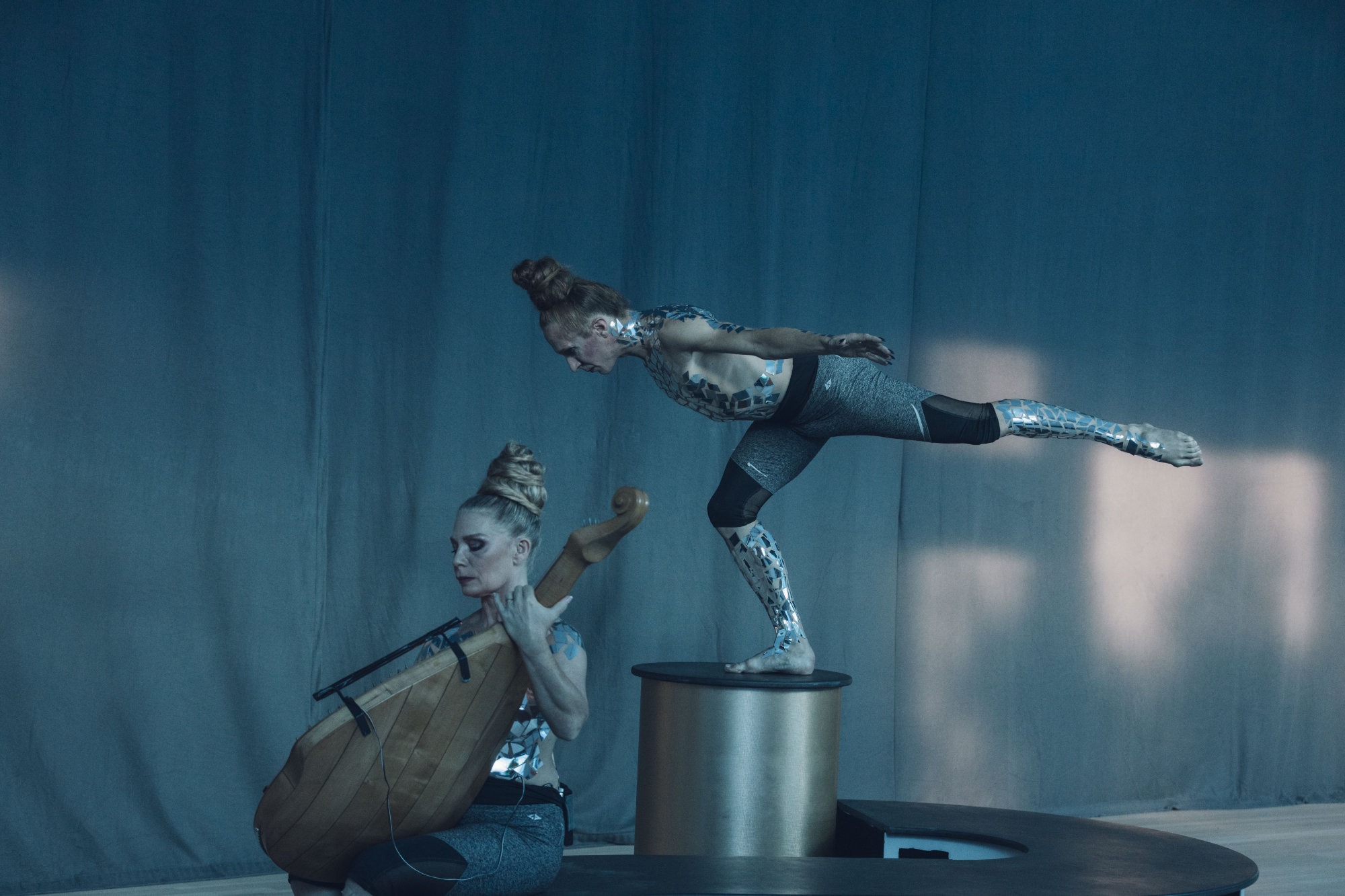 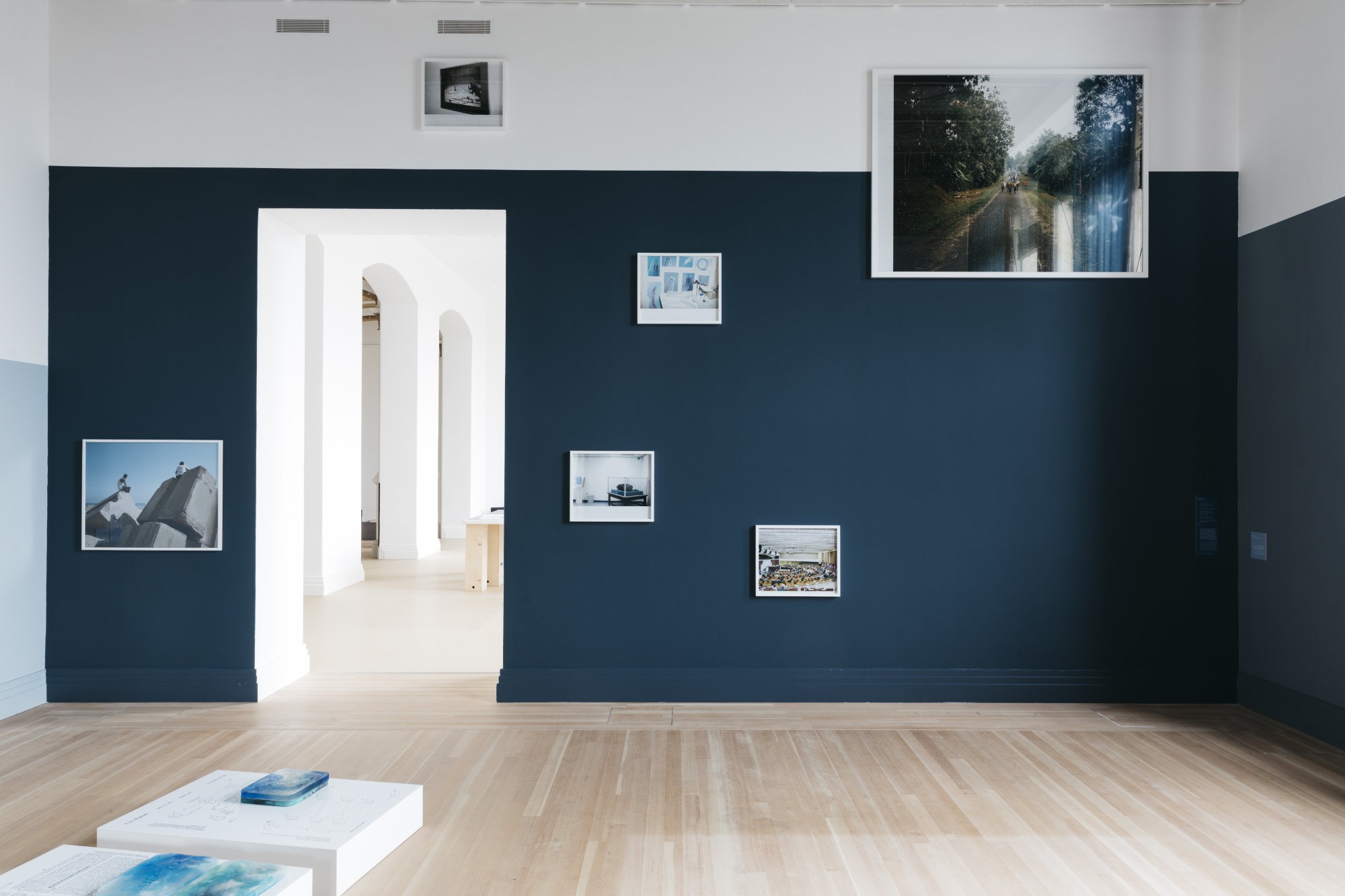 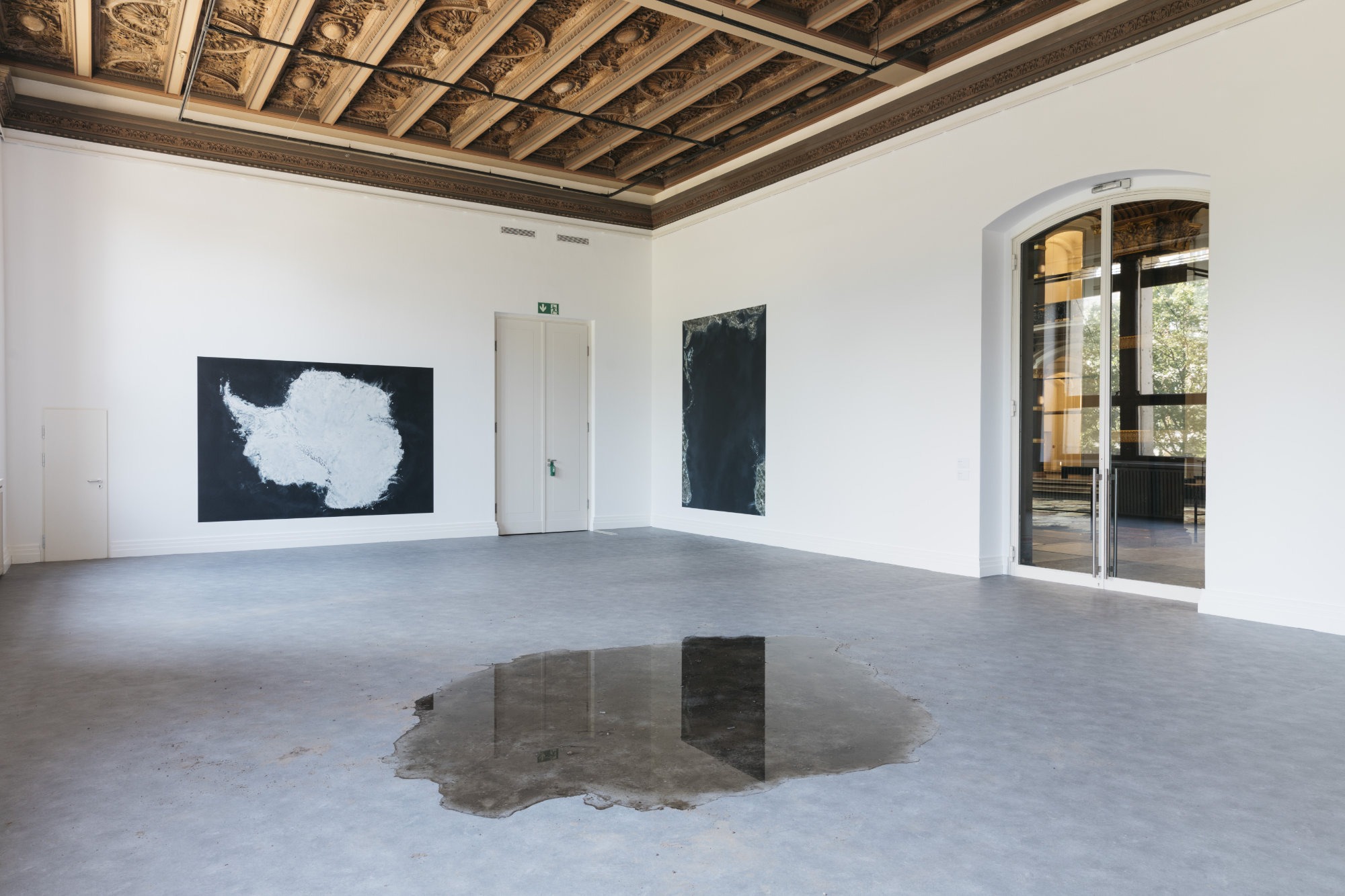 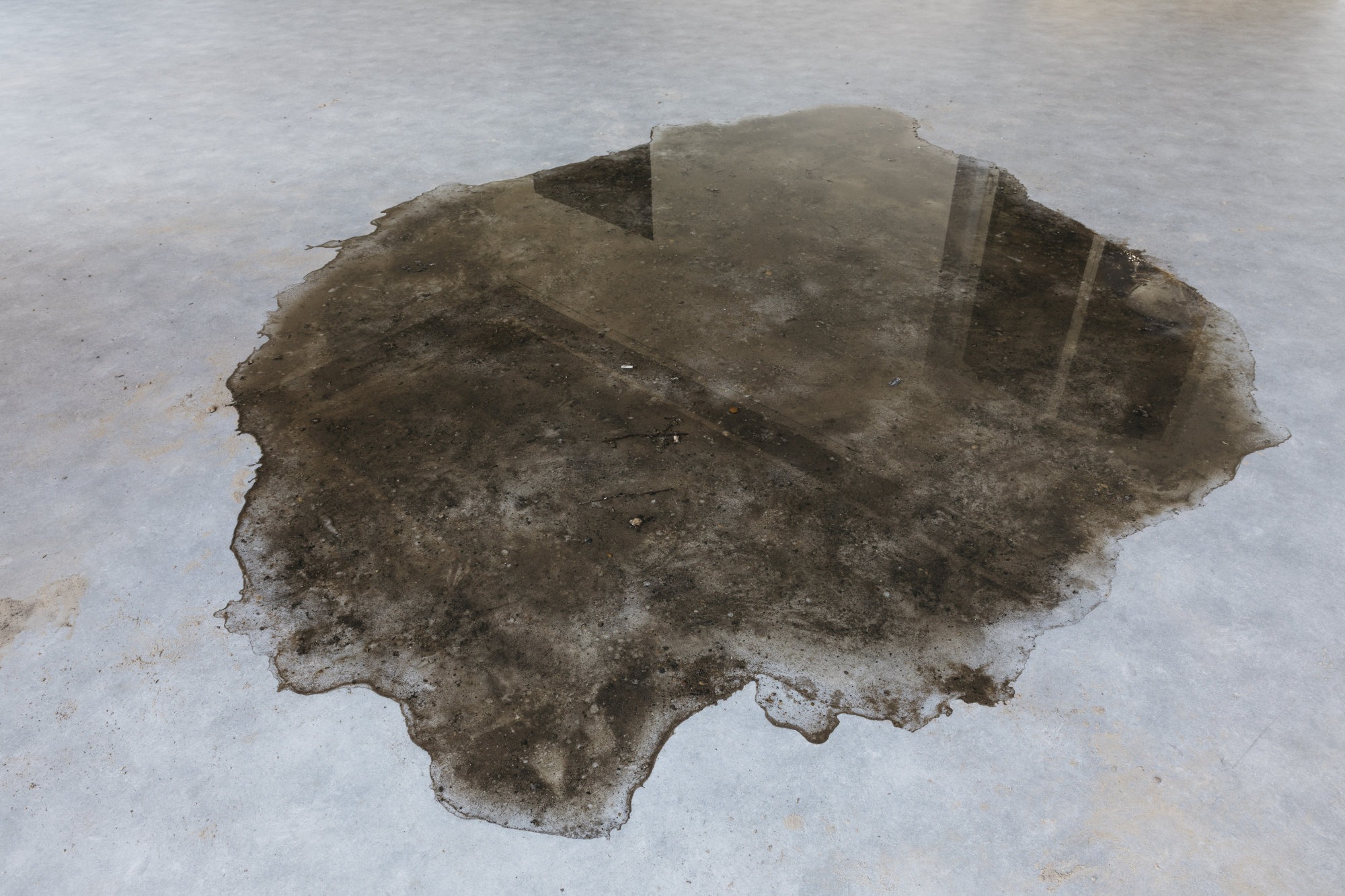 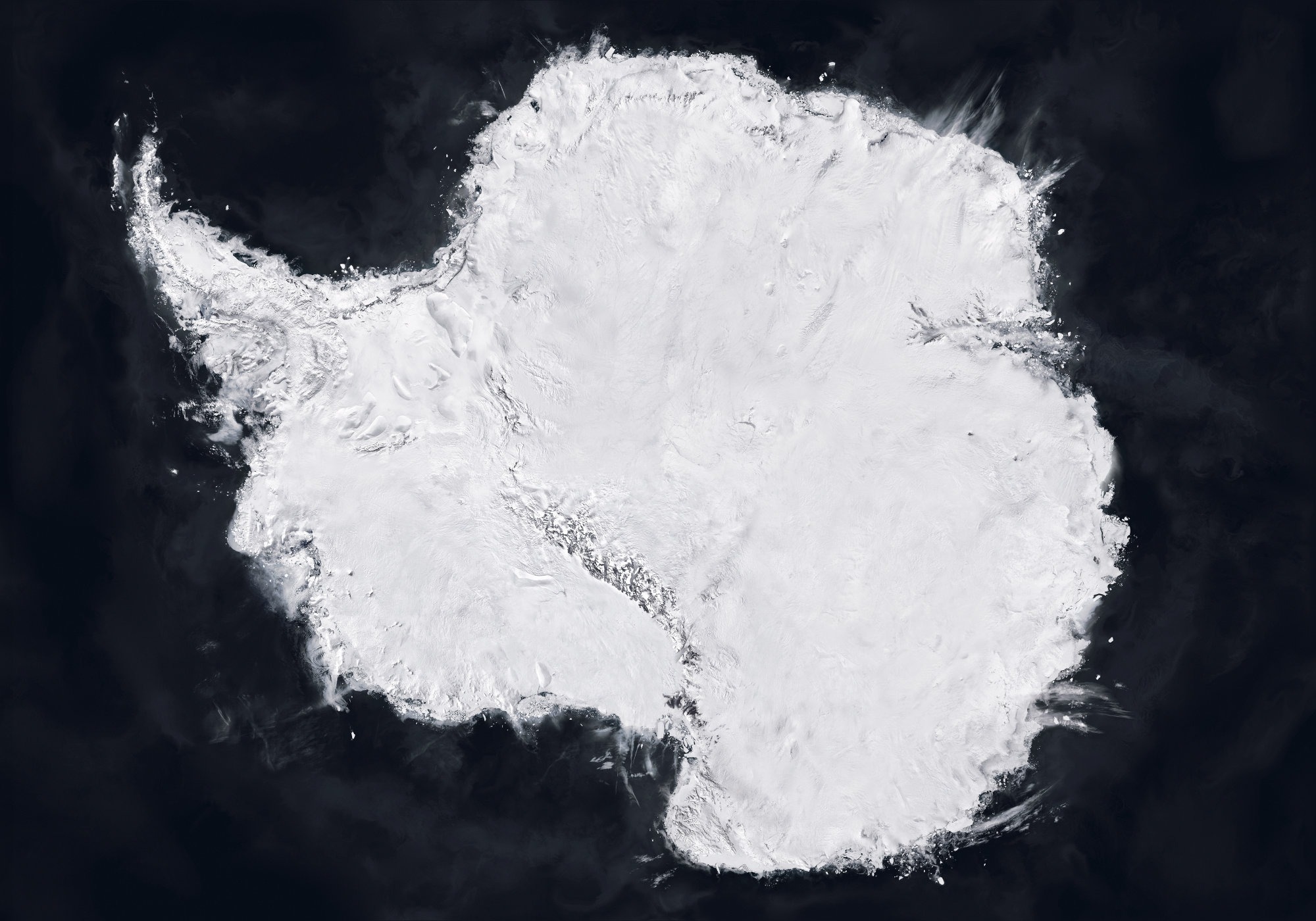 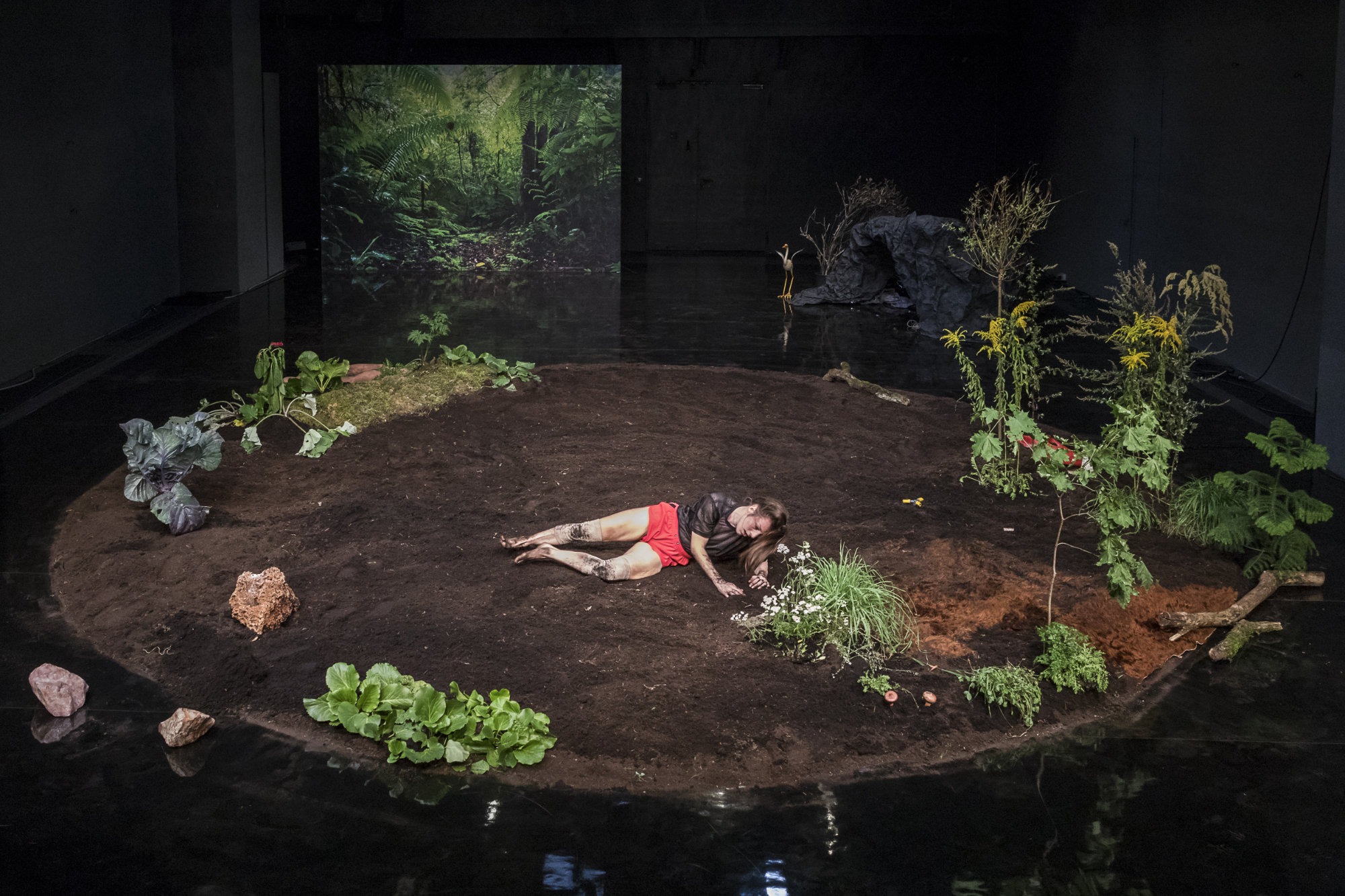 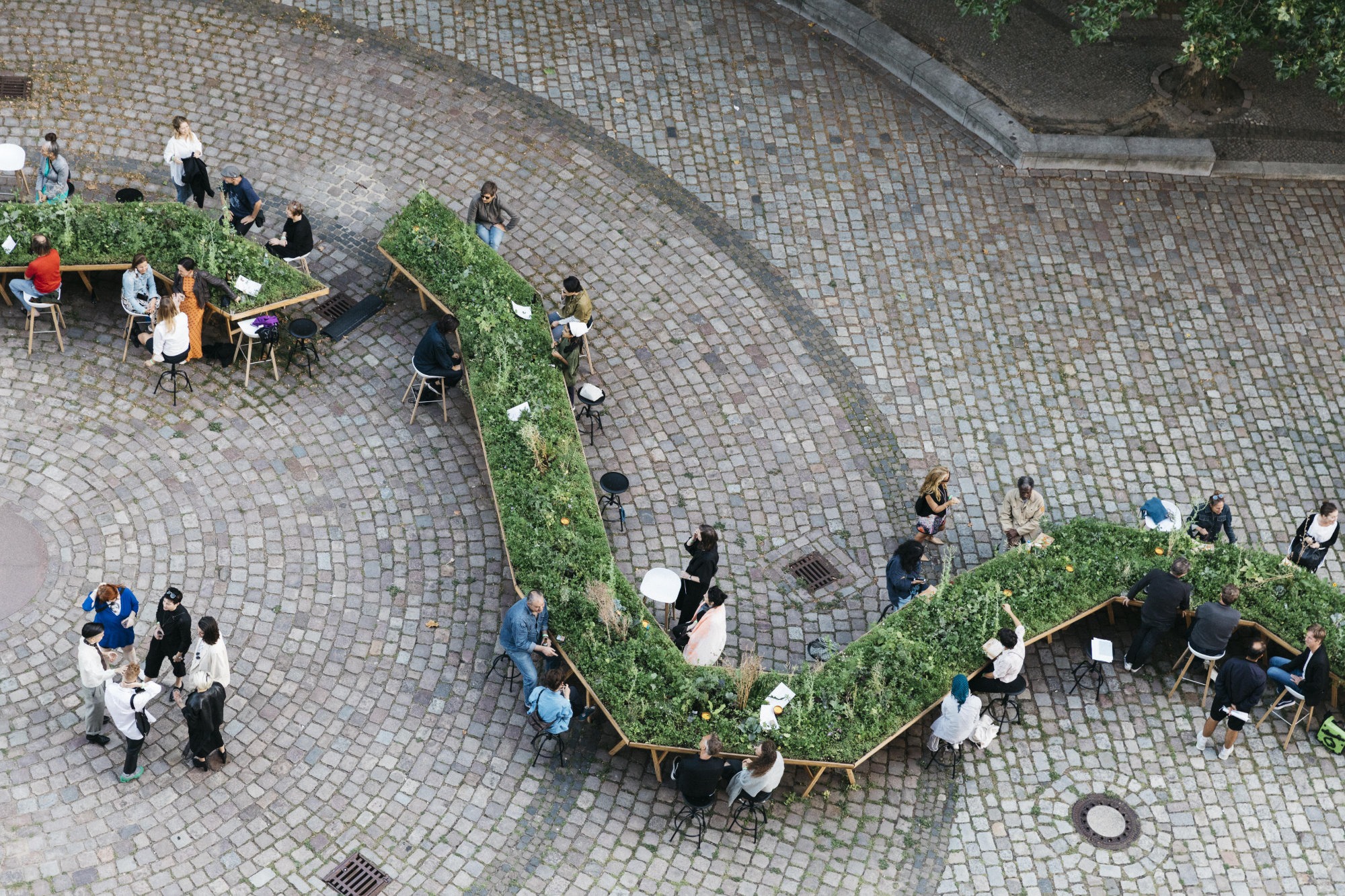 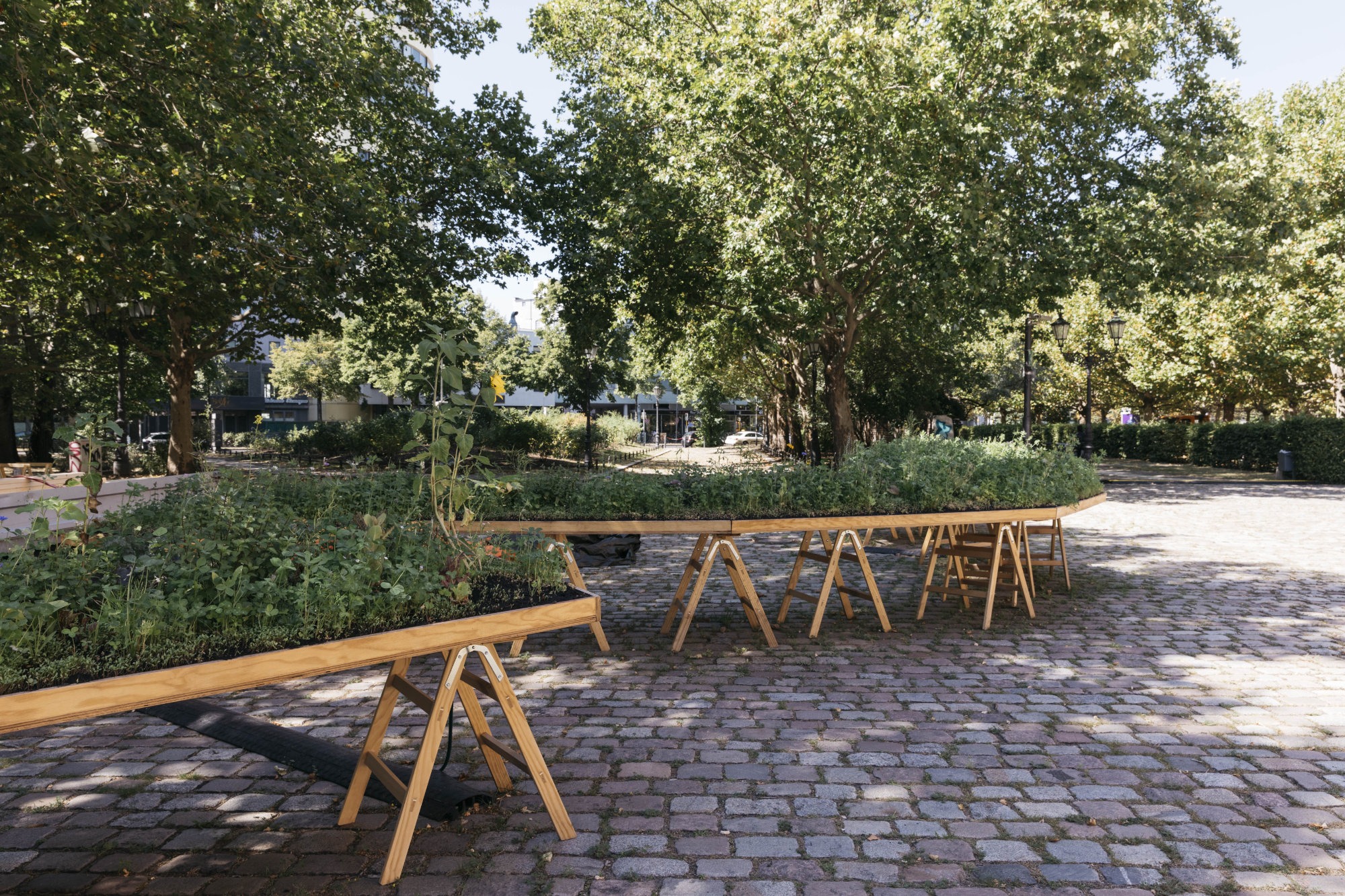 Anne Duk Hee Jordan, Into the Wild (Ongoing)
Social sculpture with herbs, vegetables, edible blossoms, table
Courtesy the artist
Installation view Down to Earth. Climate Art Discourse unglugged, Gropius Bau, Berlin, 2020
© Berliner Festspiele/Immersion. Photo: Eike Walkenhorst
Taking Bruno Latour’s eponymous essay as a starting point, the art, live work and discourse project “Down to Earth” examines a system in which our own actions are continually combined with the influences of many other agencies: “the Earth with its thousand folds”.

The climate is the largest system on earth – one which we do not exist in opposition to, but rather surrounded by. Within it, we are all connected to a broad range of human and non-human agencies forming one giant ecosystem. The climate knows no boundaries. Despite public acknowledgement of the need for fundamental changes in climate policy, statistics still show that CO2 emissions are increasing. In order for these insights to be followed by a change in behaviour, our own operating systems need to be categorically questioned and renewed. But how can we achieve this in our work, our diet and our travels? How can we initiate a different relationship with earth, a relationship that non-western and other species have already developed? Who are the new and alternative experts of this change and what form does their knowledge take? Where can we land?

This question is the literal translation of the essay published by French author Bruno Latour in 2018 whose English title is “Down to Earth”. This manifesto serves as a starting point for this year’s Immersion programme. Motivated by the desire to become politically effective in the face of the climate emergency, Bruno Latour’s essay attempts to recalibrate our thinking while simultaneously offering instructions. Hence he introduces the idea of a “third attractor” that allows us to overcome the binary opposition of traditional regionalism and liberal cosmopolitanism whilst also taking into account the ecological basis of our existence. According to Latour, anything that happens on earth is a process with many agents, both human and non-human, that all have rights and exert mutual influences over each other.

Since 2016 the Berliner Festspiele’s programme series Immersion has presented the work of artists who redefine established forms of presentation by breaking down classic juxtapositions between the work and the visitor, the stage and the auditorium, the object and the viewer. “As if there were an outside!”, Bruno Latour marvels in his essay and continues: “If the composition of the air we breathe depends on living beings, the atmosphere is no longer simply the environment in which living beings are located and in which they evolve; it is, in part, a result of their actions. In other words, there are not organisms on one side and an environment on the other, but a coproduction by both.” It is from this perspective that the art, live work and discourse project “Down to Earth” features artistic practices and alternative behaviours that propose a different relationship with the world – in the last year of the Immersion programme series. Can Latour’s arguments also help us in our quest of developing different modes of addressing and encountering the public? What can we observe and how does it feel if we apply the proposals in Latour’s book to festival and exhibition practice by disclosing our emissions and consumption levels, keeping them as low as possible and questioning and renewing the standard practices of our operating systems?

The two-week unplugged programme “Down to Earth” will bring together artists and experts in sustainability and the practices of grounding on the lower floor of the Gropius Bau and in the Südplatz located behind it to work with visual art, live work, talks, workshops, music and spontaneous interventions on other forms of being – in the Latourian sense – worldly and grounded.