From Hockney to Holbein 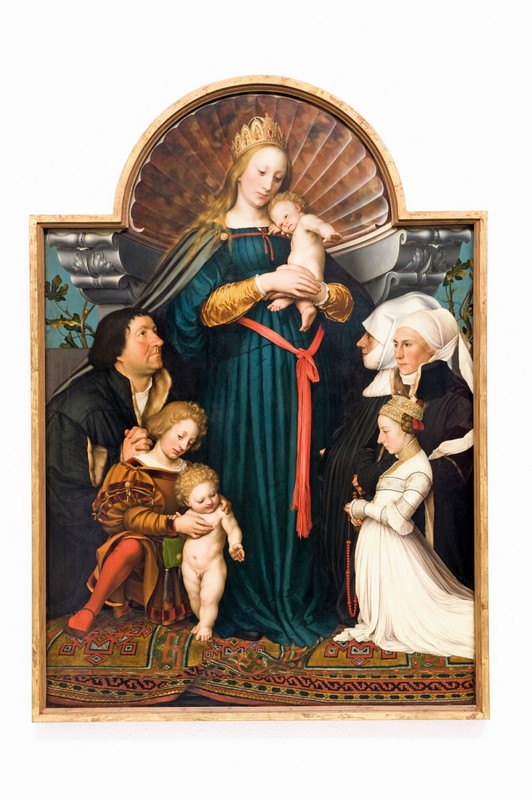 The Würth Collection is one of the largest private collections in Europe, containing more than 16,800 works of art. The most important of the classic modern artists are represented, as well as masterpieces from the Middle Ages and classic works of contemporary art. The unusual exhibition is a gain for the Kunstherbst Berlin. With more than 400 works of art of international significance, the collection will be presented to the public in a scope never previously seen, in an exhibition space of 5,000 square meters.
From 11 September 2015, the Martin-Gropius-Bau will present the exhibition “From Hockney to Holbein. The Würth Collection in Berlin”.

Analogously to the history of the Würth Collection, the exhibition delves from the present back into the history of art. Surprises are to be expected. Among the works on display are David Hockney’s season cycle, an international collection of sculptures by artists from Eduardo Chillida to Henry Moore, masterpieces of classical modernism from artists such as Pablo Picasso and Edvard Munch, breathtaking works of decorative art, and a selection of the Würth Collection’s Old Masters, including one of the most significant paintings of the 16th century, Hans Holbein the Younger’s “The Madonna With the Family of Mayor Meyer”. Another highlight is the 25-piece monumental installation “The Last Judgement Sculpture” of British sculptor Anthony Caro in the spectacular atrium of the Martin-Gropius-Bau.

The exhibition represents the latest contribution to the Berlin art scene by the collector Reinhold Würth, who celebrated his 80th birthday this year. He first launched work in 2006, with the establishing of a Chamber of Art in the newly reopened Bode-Museum.

Reinhold Würth’s passion for collecting art was triggered by the work of Emil Nolde. However, another of his purchases was a work by the Danish Constructivist Robert Jacobsen. This proved Würth’s gateway to the postwar Parisian Modernists gathered around the legendary Galerie Denise René, the world of Jean Arp, Sonja Delaunay-Terk, Serge Poliakoff, Aurélie Nemours, Fernand Léger, Günter Fruhtrunk, Jean Dewasne, Auguste Herbin, Victor Vasarely, Jesús Rafael Soto and others. His interest was also piqued by contemporary sculpture, which became another key element of his new but rapidly growing collection. Entire ensembles were assembled of the works of Denmark’s Robert Jacobsen, the Basque Eduardo Chillida, Austria’s Alfred Hrdlicka, the Swiss Max Bill, Britain’s Anthony Caro, and Bulgarian-American Christo and his wife Jeanne-Claude, who in 1995 covered both the Reichstag in Berlin and the Museum Würth in Künzelsau.

However, the Museum Würth also acquired important specimens of modern sculpture by Barbara Hepworth, Henry Moore, Magdalena Abakanowicz, Richard Deacon, Barry Flanagan, Antony Gormley, Eduardo Paolozzi, Erwin Wurm, Jaume Plensa, and Tony Cragg. The collection does not follow a narrow, canonical concept, but maintains an openness that is reflected in its diversity. Reinhold Würth’s talent lies in finding works – often directly from the artists – and in establishing connections; thus his interest also in complexes of works brought together by others.

Reinhold Würth is a collector of collections, as he spectacularly added more items to the collection. The transformed groups of works are presented to the public in Berlin in excerpt form.

The surrealist Max Ernst is represented by some 50 works. He is one of the central figures of the collection, which has a nearly complete collection of his prints and artist’s book with original collages, as well as a magnificent series of paintings and sculptures. It contains Max Ernst incunabula such as the painted doors from the house of Paul Eluard in Eaubonne from 1923, or the original plaster figure of his Young Man with Beating Heart from 1944, towards the end of the Second World War. Thanks to Würth’s broad collecting interests, the magical paintings of Mexican modernism, from Rufino Tamayo to Francisco Toledo, are also to be found in the collection.

Important movements of classical modernism, in particular German late Impressionism and Expressionism, are a further focal point of the collection, with Max Beckmann, Ernst Ludwig Kirchner, Max Liebermann and Edvard Munch among the most significant artists represented. Superb groups of works by Georg Baselitz and Anselm Kiefer illustrate the process-orientated nature of history and memory. The erotically charged late work of Pablo Picasso is juxtaposed in a separate room with David Hockney’s striking cycle of the four seasons, representing the poetry of plein air painting.

The Old Masters form yet another collection within the collection. A significant impetus was provided by the acquisition of the collection of late mediaeval Old Masters from the castle of Donaueschingen. Supplemented by further important works, such as their three-dimensional counterparts by Tilman Riemenschneider, Daniel Mauch, and others, they form a bridge to the modern age.

A manifest expression of a passionate love for collecting is shown by the collection of precious objets d’art from the “cabinets of curiosities” of the 17th and 18th centuries. The Arch-Cupbearer’s Cup of the Count of Limpurg from 1562 is one of the greatest goldsmith’s works of the German High Renaissance. It is listed as a work of national cultural significance, with particular significance to southern Germany.

The team of curators responsible for the exhibition comprises the curators of the Würth Collection as well as the members of the Art Council of the Würth Group, with Christoph Becker, Thomas W. Gaehtgens, Fabrice Hergott and Martin Roth, under the direction of Peter-Klaus Schuster. A comprehensive educational program will make the collection accessible to a broad range of visitors.