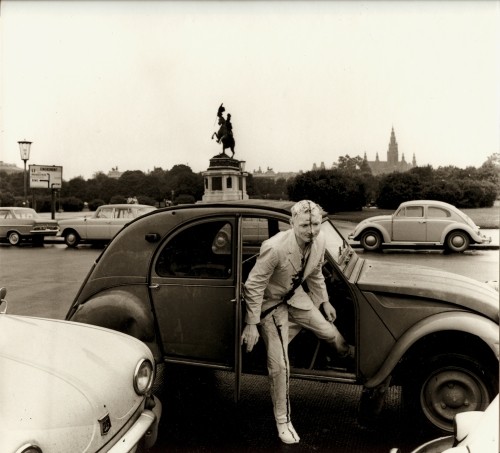 ünter Brus: Vienna Walk, 5 July 1965. Inner City, 1010 Vienna
© BRUSEUM / Neue Galerie Graz, Universalmuseum Johanneum; photo: Ludwig Hoffenreich
Since Günter Brus (born 1938 – lives in Graz) first appeared in public as an “actionist” in 1965 with his “Wiener Spaziergang” (Viennese Stroll), he has created a manifold œuvre. This is the artist’s first exhibition in Berlin, even though Brus lived there for a long period, and influenced the art scene in the city significantly. The comprehensive exhibition with the title “Fault Zones” leads through his complete oeuvre, but also focuses on special aspects.
Starting with informal works, the actionist period is shown in films, photographs, documents and numerous drawings, as well as by giving a vivid impression of the artistic environment in which the art originated. At the beginning of the 1960s, Viennese “actionism” had expanded painting not only into the objective, but also into the physical realm. With his “self-paintings”, Brus played a decisive role in the performative shift in literature and visual arts. In 1970 the last action “Zerreißprobe” (Crucial Test) took place in Munich.

After being convicted by court to a prison sentence due to the “vilification of Austrian symbols and violating public morality and chasteness” in Vienna, Brus fled into exile to West Berlin. Between 1969 and 1975 not only his most eminent works were created, but also those with which he was invited to documenta 5 in 1972, and also to documenta 7 in 1982. In the 1970s a creative cosmos originated in the “Exil” Restaurant in Berlin Kreuzberg, the effects of which are felt to this day in the artistic and intellectual scenes.

Friendship pictures are closely related to this period. Drawings by artistic colleagues such as Arnulf Rainer, Ossi Wiener, Gerhard Rühm, and many more, are accorded their own chapter in the exhibition. Günter Brus cultivated a close relationship with music, stage and his large picture compositions are comprehensively presented. The exhibition is of a retrospective character, without being a complete retrospective.

A catalogue of approximately 200 pages is being published for the exhibition by Verlag Walther König. Catalogue authors: Barbara Catoir, Roman Grabner, Britta Schmitz.

ORGANIZER Berliner Festspiele / Martin-Gropius-Bau. An exhibition of Nationalgalerie – Staatliche Museen zu Berlin and Martin-Gropius-Bau in collaboration with the „BRUSEUM/Neue Galerie Graz, Universalmuseum Joanneum“. Made possible by the Verein der Freunde der Nationalgalerie. With kind support of the cultural department of the country Styria and the Embassy of the Republic of Austria.
CURATOR Britta Schmitz
www.gropiusbau.de