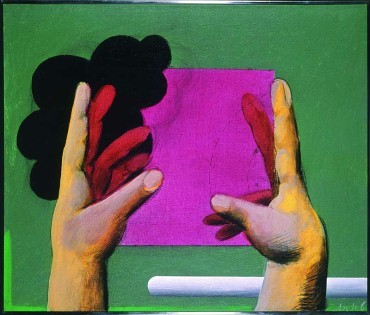 Horst Antes is one of the most internationally significant figurative artists of recent decades. Like few other German artists he has contributed to the global artistic debate. He has been represented at the Documenta in Kassel on three occasions. He has also exhibited at the Biennales in Venice and Sao Paolo. His works have also been seen in all the major European, American and Japanese museums and collections.

The exhibition in the Martin-Gropius-Bau will focus on his painting work, covering all his creative phases over a period of five decades – from casual beginnings circa 1958 to the spectacularly large and austere in-house images of the last phase. The show in the Martin-Gropius-Bau will be the first major one-man exhibition of the paintings in nearly two decades. About 90 pictures will be on display. They will be supplemented by other works closely bound up with his painting oeuvre: two sculptures, four “votive” images, and some books and portfolios designed by Horst Antes.
Not only the many loans from abroad and pictures from the artist’s own collection that are being shown publicly for the first time will make this exhibition unique. It will also be remarkable for highlighting the great contribution made by Horst Antes to the history of 20th century art and leave an indelible mark in the visitor’s memory.

We begin the exhibition with the brightly coloured action painting of the late 1950s. This is followed by the red pictures (“The Red Majas”) of enormous intensity and archaic eroticism. A larger category of works is ushered in with the emergence of the “Kopffüssler” (lit. “Head-Footer”), that artificial figure that was about to make a triumphal entry into the whole world of art. Another hall brings together pictures that are directly connected with the artist’s adopted country, Italy: whether through the Masters of the Renaissance, the gentle landscape between Florence and Siena, or the clear light of Tuscany. The next thematic category is the religiosity of the artist who – as a collector – has always shown a passionate interest in the magic origins of religions. For the first time two sets of motifs – one associated with Christianity (the tools of the crucifixion, stigmata) and the other with the beliefs and rituals of the Hopi Indians (rain, serpent, tablets) – are brought together. The final halls document the turning point in the work of Horst Antes who – after the Falkland War – turned his back on the figure he had invented in favour of new themes – windows, boats, date pictures – and especially the house. In the final hall eight very large, mostly black “house” pictures make an overwhelming impression with their austere idiom and massive presence. The “house” figure has replaced the human figure and stands for the whole of humanity and its thoughts.

The exhibition in the Martin-Gropius-Bau will offer an opportunity to rediscover and re-evaluate the complex oeuvre of Horst Antes.

Horst Antes was born in Heppenheim in 1936 and has lived in Sicellino, Karlsruhe and Berlin. His teacher at the Academy in Karlsruhe was H.A.P. Grieshaber. In the abstraction versus figuration debate of the late 1950s Horst Antes was quick to combine action colour compositions with figurative elements. The 1960s saw the emergence of the “Kopffüssler” figure, since when his work has enjoyed worldwide renown. In 1982, under the influence of the Falkland War, the first stencil figures appeared. In 1987 Horst Antes began the series of “window” and “house” pictures. At the same time he produced numerous large-scale sculptures that were set up in public spaces in Düsseldorf, Salzburg, Stuttgart, Vienna and Mainz.