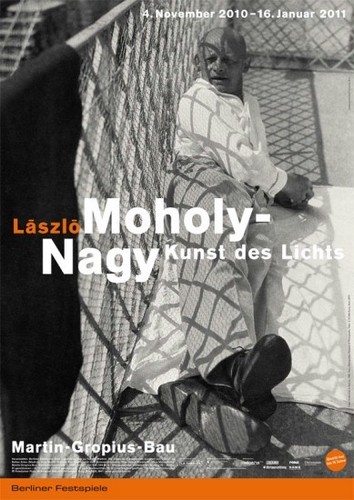 For Moholy-Nagy was always a theoretician and practitioner in equal measure, always wanting to be a holistic artist. He approached his work – painting, photography, commercial and industrial design, film, sculpture, scenography – from a wide variety of aspects and practised it as a radical, extreme experiment, by refusing to place his hugely differing works in any sort of aesthetic hierarchy. He also attached enormous importance to education, which is why, at the request of Walter Gropius, he worked in this field for the Bauhaus in Weimar (1923–1925) and Dessau (1925–1928). In Chicago, where he settled in 1937, he again assumed teaching duties and founded the “New Bauhaus”, which sought to realise the programmes of the German Bauhaus in the United States. Shortly afterwards he founded the Institute of Design in Chicago, where he was to remain active until his death in 1946. The institute was later incorporated in the Illinois Institute of Technology, which offers study courses to this day.

From Weimar to Chicago Moholy-Nagy retained his faith in his pedagogical ideal, which for him meant not only teaching, but the moral education of human beings. He believed in education as a means of developing all the abilities lying dormant in the students and as a means of paving the way to a “new, total human being”.

All of Moholy-Nagy’s theoretical contributions arose out of his artistic and pedagogical work. In his numerous writings he gradually presented his ideas, thus developing a complete artistic and pedagogical aesthetic. In his 1925 landmark essay “Painting, Photography, Film” he developed an aesthetic theory of light – light as a matrix of art and art as light. He applied his aesthetic theory of light not only to painting, photography and film, but also to theatrical and commercial design.

From that point on light became the foundation of Moholy-Nagy’s practical and theoretical work. For him art of whatever kind only acquired meaning when it reflected light. Painting was also reinterpreted on the basis of this criterion. Moholy-Nagy described his development as a painter as a shift away from “painting from transparency” to a painting that was free of any representational constraints and created the possibility of painting “not with colours, but with light”. This theory reached its full potential in photography and film. Etymologically, the word “photography” means “writing with light”. The artistic essence of film consists in the portrayal of “inter-related movements as revealed by light projections”. Although he was not in charge of the photography classes in the Bauhaus, it was there that he wrote Painting, Photography, Film, drawing upon his photographic experience. He invented the “photogram”, a purely light-based form of graphic representation, thus demonstrating an ability to create photographic images without a camera at the same time as the “Rayogram” was invented by Man Ray in Paris. He saw photography as a completely autonomous medium whose potential was still to be discovered. He criticized “pictoriality”, propagating an innovative, creative and productive photography. He regarded seriality as one of the main features of the practice of photography and opposed the “aura” of the one-off work in contrast to the infinite multifariousness of the photographic cliché, thus anticipating one of Walter Benjamin’s theses.

The distinction between production and reproduction is a basic theme of his art. A prominent aspect of every work is its ability to integrate the unknown. Works that only repeat or reproduce familiar relationships, are described as “reproductive”, while those that create or produce new relationships are “productive”. For Moholy-Nagy the ability of a work of art to create something new (a basic feature of Modernism) is a key criterion. He postulated for painting, photography and film a moral and aesthetic imperative – the New. Art had to confront new times and an industrial civilization. In the systematic implementation of this thesis 1926 turned out to be the year in which his pictorial output was greater than his works in other fields, but 1927 witnessed a positive flood of photographic, scenographic, kinetic and film productions. Painting was something he never abandoned. He decided to drop the representational painting inherited from the past and to devote himself to non-representational or “pure” painting instead. The emergence of photography gave painting the perfect opportunity to free itself from all figurative or representative imperatives. Artists did not have to decide in favour of one medium or another, but should use all media to capture and master an optical creation.

The show will be jointly curated by Circulo de Bellas Artes (Madrid), the Martin Gropius Bau (Berlin), and the Geemetemuseum (The Hague).
www.gropiusbau.de