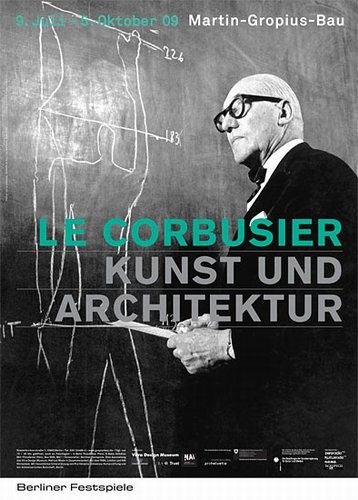 Le Corbusier (1887–1965) is considered to be one of the most significant architects of the 20th century. His work continues to exert a considerable influence on architecture and town planning to this day. The exhibition will take an explicitly contemporary view of its subject that takes account of the latest research while at the same time attempting to do justice to the perennial discourse on Le Corbusier. On the other hand it should be seen as an introduction to the work of the architect – especially for those more recent generations for whom Le Corbusier is already part of the history of the 20th century.
Divided up into three relatively autonomous areas – Contexts, Privacy and Publicity, Built Art – the show will pick out leading themes in Le Corbusier’s work: his fascination with the modern metropolis, his Mediterranean and oriental interests, his pursuit of organic forms in the 1930s, and also his interest in new technologies and media. It is only by seeing these and other aspects in context that we can gain an overall understanding of his œuvre, which manifested itself in an ever more intensive interplay between architecture, town planning, painting, design, film and other disciplines. Selected exhibits from the Fondation Le Corbusier in Paris will form the core of the exhibition.
They include original paintings, sculptures, numerous original pieces of furniture, original drawings and plans, first editions of Le Corbusier’s books plus numerous small objects from the architect’s private collection, which he used for purposes of inspiration, orientation and demonstration. As any comprehensive understanding of Le Corbusier must also take account of the mutual influences between himself and many of his contemporaries, the exhibition will also feature for the first time numerous exhibits of contemporaries with whom he had close relations, including original pieces of furniture by Charlotte Perriand and Jean Prouvé as well as paintings by Robert Delaunay, Fernand Léger, Georges Braque and André Bauchant. The exhibition’s use of such a wide spectrum of media is intended to highlight Le Corbusier’s historical models while also illuminating the technical, formal and philosophical backgrounds to his works.

The exhibition is a production of the Vitra Design Museum.
www.gropiusbau.de