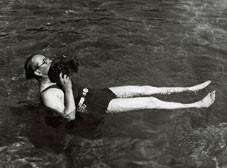 He was the best-paid star photographer of his time. Budapest, Berlin and New York were the stages on his road to success. He photographed athletes and dancers in action, freed fashion photography from the confines of the studio, and set the static medium of photography in motion. Martin Munkácsi (1896-1963) is regarded as the most important pioneer of modern photojournalism. The evolution of the medium and changes in taste caused him soon to fall into oblivion. The Grand Retrospective in the Martin-Gropius-Bau entitled “Martin Munkácsi – Photographs” now restores to this son of Hungary his unique position in the history of photography.

The exhibition shows more than 350 photographs from the years 1923 to 1963, including 300 original prints. Many photos were never republished after their first appearance in newspapers and magazines and are therefore almost unknown today. The search lasted for years.

Major American museums refused the donation of the Munkácsi archive after his death in 1963. His pictures and negatives were scattered all over the world, and a large part of the work he left behind was lost. Only the Ullstein Archive in Berlin and the F.C. Gundlach Collection in Hamburg still possess complete portfolios of his life’s work from the Hungarian, German and American phases.

Budapest – Berlin – New York
In Hungary the young reporter from a poor background managed to make a living mainly with reports and photos of sporting events. When out one day with his camera he witnessed a brawl that had a fatal outcome. The series of photos he took cleared the accused and drew public attention to the photographer. He had just happened to be in the right place at the right time. In 1928 Martin Munkácsi moved to Berlin. The newspaper market was booming, and Berlin’s newspaper publishers maintained close contacts with Hungary. In 1928 Laszlo Moholy-Nagy also moved to Berlin, followed in 1931 by Ernö Friedmann, who later changed his name to Robert Capa.

Munkácsi's photos appeared in the respected fashion magazine Die Dame, in Koralle, Uhu and Vu as well as in other domestic and foreign titles. His main work was for the Ullstein Verlag’s innovative Berliner Illustrirte Zeitung, which had a print run of more than a million copies. Munkácsi provided numerous titles, concise reporting and brilliant pictorial essays. Even today one can see the exemplary nature of their formal structure. Munkácsi always combined journalistic precision with a high standard of aesthetic form and he eventually became one of the most outstanding representatives of the movement called “Neues Sehen” (“New Vision”) and the modern movement in photography in general.

Munkácsi did not see himself as a specialized sports or fashion photographer, but as a “jack of all trades”. In Berlin he photographed the slum dwellings of the poor as well as the lavish homes of the rich and famous. He recorded such things as the carefree antics at the “Luna Bad Wannsee” (1931) and a powerful polo stroke at the “Polo Match in Berlin-Frohnau” (1929). He also produced fascinating and unique aerial shots of a flying school for women not far from Berlin.

For the Berliner Illustrirte Zeitung Munkácsi travelled to Turkey, London, New York, Sicily and Egypt. In 1930 he brought back from Liberia, Africa’s first independent state, a sensational picture entitled “Three Boys Running into the Surf”. The rear view of the black children caught between sand and spray impressed Henri Cartier-Bresson. “For me,” confessed the French “master of the moment” in 1977, “this photograph was the spark that ignited my enthusiasm... I suddenly realised that, by capturing the moment, photography was able to achieve eternity. It is the only photograph to have influenced me. This picture has such intensity, such joie de vivre, such a sense of wonder that it continues to fascinate me to this day.”
Munkácsi also knew how to capture the right moment with his heavy 9 x 12 reflex camera.

He could shoot a picture in the space of a second, yet still take the time to think. “Think while you shoot!” was his motto. Munkácsi photographed motorcyclists spattering mud (c. 1923), while in “A Hundred Kilometres an Hour” (1929) he depicted aircraft as icons of technology. Ever a symbol of speed and dynamism, he himself flew by Zeppelin to South America. Next to sport – especially football – he was fascinated by dance. “Fred Astaire on Tiptoe” (1936) seems just about to take off, while “The Operetta Soubrette Rosi Barsony Performing her Fantastic Grotesque Dance” (1933) is already airborne.

A more menacing moment is presented by the boots of the “Reichswehr Troops in Marching Formation”. On 21 March 1933 he photographed the “Day of Potsdam”, the fateful event at which the aged President Paul von Hindenburg handed Germany over to Adolf Hitler. The “BIZ”, or Berliner Illustrirte Zeitung, appeared in a special edition, still under the direction of its Jewish editor-in-chief, Kurt Korff. Two months later the publishing house was Aryanized. Martin Munkácsi left Germany in 1934 and, like many prominent members of the publishing house staff, went into exile. In New York he accepted the 100,000-dollar contract that Carmel Snow, the famous editor-in-chief of Harper’s Bazaar, had offered him a year earlier.

Star photographer with a star’s income
In the USA he achieved absolute stardom, revolutionizing fashion photography. He thought nothing, for example, of having his models walk along the beach in bathing outfits – even in winter – in order to set off the jaunty swing of a cape. His spectacular fashion series also contributed to the image of the modern Western woman as a successful, independent, dynamic city dweller. Munkácsi also published very successfully in Life and landed the most lucrative contract of his career with the Ladies’ Home JournaL for the “How America Lives” series. Between 1940 and 1946 he produced 65 out of a total of 78 contributions on the everyday life of Americans from all walks of life. Other highlights of his work are the unusual portraits of Hollywood stars such as Jean Harlow, Katharine Hepburn, Leslie Howard, Jane Russell, and Marlene Dietrich. He later photographed for the advertising industry and worked as a film cameraman. In 1963 Martin Munkácsi died largely forgotten and impoverished in New York. He was struck down by a heart attack while attending a football match.

In the Grand Retrospective in the Martin-Gropius-Bau selected copies of the periodicals for which Munkácsi worked will be on display: the Budapest magazine Pesti Napló, the publications of his Berlin years, such as the Berliner Illustrirte and Uhu, as well as those of his American period, Harper’s Bazaar, Life and The Ladies’ Home Journal. Other exhibits include first editions of his own publications and monographs on his work as well as important photographic yearbooks in which he was represented.

Of particular interest are some of the few surviving masterpieces of his fashion photography. His aesthetic credo is illustrated by the dummy of a book he planned but never completed. Private snapshots show the photographer at work and in his leisure moments.

In 2005 the exhibition was to be seen in Hamburg under the title “Martin Munkácsi. Think While You Shoot!” in the Internationales Haus der Photographie – Deichtorhallen.

Other sports photographs by Martin Munkácsi may be seen at the exhibition entitled “The Fascination of Football – Photographs from the early period of the game, 1900- 1940” – Official Contribution of the Art and Culture Programme to the 2006 FIFA World CupTM in the Willy-Brandt-Haus, Berlin, from 22 June to 31 July 2006.