NO IT IS ! William Kentridge 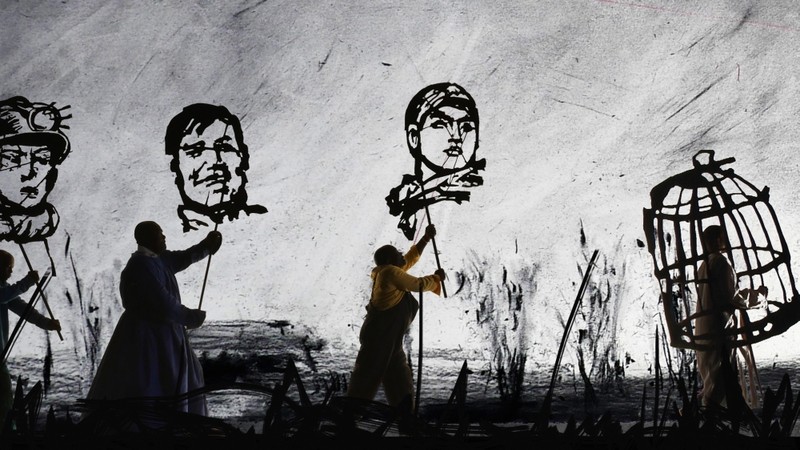 © Courtesy the artist, Marian Goodman Gallery (New York, Paris, London); Goodman Gallery (Johannesburg, Cape Town) and Lia Rumma Gallery (Naples, Milan)
South African William Kentridge is one of the most internationally significant contemporary artists. He is not just a visual artist but also a filmmaker, director and a great raconteur. His comprehensive body of works has spanned several artistic disciplines for more than three decades now. Berliner Festspiele will present his complete interdisciplinary oeuvre for the first time: at the Martin-Gropius-Bau (May 12th to August 21st 2016) and in the Haus der Berliner Festspiele during the Festival Foreign Affairs (5th to 17th July 2016).

At the center of his creative process is his visual work. It is the point of departure for the large-scale show curated by Wulf Herzogenrath in the Martin-Gropius-Bau. The spectrum of works presented here ranges from drawings through the famous animated films dedicated to Georges Méliès (2003) and Drawings for Projection (1989-2011) to the monumental film projection More Sweetly Play the Dance (2015) and the spatial installation The Refusal of Time, which premiered at the Documenta in 2012. The two “cabinets of wonders” to be seen in the Martin-Gropius-Bau lead into the atmosphere of the studio, the creative locus: Works from Kentridge’s collection, including etchings by Goya, Dürer and Hopper, are his source of inspiration, and correspond to his sketches, collages, and pictures, which proceed through various media in the course of the creative process, growing ever more complex.

The title NO IT IS !, evokes the contradiction of the images. It also transcends the boundaries of the museum itself, extending to the lecture performances Six Drawing Lessons (2012), an autobiographical, artistic and political story that gathers the themes of his oeuvre from the earliest days to the present and links the two venues – the Martin-Gropius-Bau and the Haus der Berliner Festspiele. In the lectures and the two cabinets of wonders, his work and the processes of its creation are condensed and intensified. In the same way as performance is brought into the museum (to be seen are Paper Music (2014) and A Guided Tour of the Exhibition for Soprano with Handbag (2016)), further works by Kentridge can be experienced at the 11-day Foreign Affairs festival.

William Kentridge studied political sciences and African studies before he changed to fine arts. He studied art, drama studies and theater studies in Johannesburg and Paris. ‘Uncertainty’ is a central concept in his show ¬– it releases pressure from the artistic practice which cannot be pinned down to a specific medium. It shows pictures ‘along the way,’ that means in constant transformation and transition. Kentridge chooses pictorial subjects which always address the uncertainty of life. This makes his oeuvre more relevant than ever.

The works by William Kentridge, which are being presented during the Foreign Affairs festival, are funded by the German Federal Cultural Foundation.
www.gropiusbau.de