The Tropics. Views from the Middle of the Globe 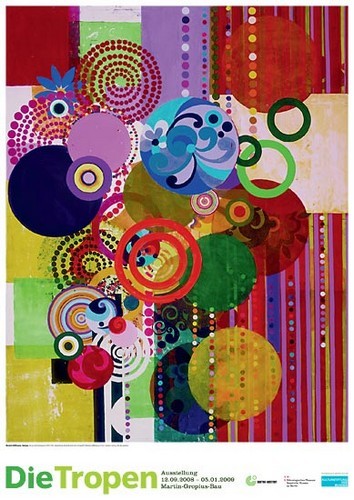 THE TROPICS. VIEWS FROM THE MIDDLE OF THE GLOBE

Twenty years after the trailblazing show Les Magiciens de la Terre in Paris the “Tropics” exhibition in the Martin-Gropius-Bau is once again attempting to explore in troubled times the currents of energy and subtle discords between the hemispheres, to show which cultural forces are working in harmony and which in opposition to one another. The exhibition aims to create an incorruptible, crisis-resistant stock of images that permits a non-hierarchical view of the world.
The general idea is to re-aestheticize the subject of the tropics, not to look at them from a political and economic viewpoint for once, but to concentrate on culture as a counterweight. Instead of one-dimensional debates on poverty (or hunger, or violence, or political crises) or crass generalizations we are offered a glimpse of the artistic complexity and aesthetic richness of the tropics in a way that promises to change the terms of the North-South dialogue. This will free the South from the trap of always being seen in a bad light, while the North’s insistence on explaining the world in economic terms can be put into proportion, thus paving the way for a genuinely cosmopolitan and multi-perspective view of the world in the Humboldtian sense. So the exhibition is a way station on the road to the Humboldt Forum, which in future will invite the non-European cultures to a dialogue with the European masterpieces on the Museumsinsel here in the heart of Berlin.
The concept of the tropics was always a cultural construct, and not just for those who lived outside them. Notions taken from literature and the plastic arts always came between the nature of the tropics and its perception by human beings. Interpretations and ways of seeing the tropics are like a library of images or a museum of make-believe, a repository of our dreams and secret desires. Even today it is still the artists who shape our view of the tropics.
The exhibition begins with the European projection of the tropics, while at the same time attempting to reflect this construct. This ambivalence shows itself in the different approaches of the three curators. Alfons Hug shows not only works by contemporary artists from the tropics, but also works by artists who, though not themselves from the tropics, take them as a theme. Viola König groups objects under the heading of “Colours and Sounds of the Tropics” so that common features of certain aspects of art from the tropics can be explored. Peter Junge presents examples of art from the tropics concerning three basic themes of human societies, whose only common feature is that they are assigned to cultures belonging to the geographically defined region of the tropics. Aspects of the European notion of the tropics are not reflected in these works. Whether they constitute parts of a body of tropical art having points in common that fundamentally distinguish them from artworks external to the region is a question that the exhibition can only raise, but not ultimately answer. As far as the discourse on the tropics is concerned, the openness of this situation is a good thing. It helps to deconstruct the image of the tropics constructed by Europe, which is necessary if we are to have a new vision that does more justice to this theme.
Around two hundred exhibits from Africa, Asia, Oceania, Australia and tropical America from the collections of the Ethnological Museum in Berlin, which are among the world’s largest, are confronted with works by forty contemporary artists from Brazil, South America, Europe, Africa and Asia. Old and new art rub shoulders with each other. In the contemporary art section the subjects extend from Indonesia to Cuba, from West Africa to Brazil.
This exhibition is the first attempt to build a bridge between works that arose in pre-modern times and contemporary works. Modernism has deliberately been left out since, for example, Picasso’s references to African art or the German Expressionists’ to Melanesian sculpture have been sufficiently illuminated elsewhere.
The pre-modern art shows us the tropics as they were before they lost their innocence and morphed into the so-called Third World. It responds to the stigma of its present exclusion with serenity and composure. Its charm consists in its irresistible formal language, the wealth of shapes, the spiritual content, and the ability to involve the viewer in a dialogue. The strength of the contemporary art, on the other hand, lies in its high degree of reflectiveness and critical potential. At the same time, however, today’s artists also reveal a revival of individual mythologies. Points of contact are provided by the fact that not a few contemporary artists systematically appropriate elements of old cultures and incorporate anthropological or ethnological themes in their works.
In addition to about 200 old artworks by mainly anonymous artists from Ghana, Nigeria, the Democratic Republic of Congo, India, Thailand, Sri Lanka, Myanmar, Indonesia, Papua New Guinea, Hawaii, Samoa, Brazil, Guatemala, Mexico, Panama, Peru, and Bolivia, it is planned to show works by the following contemporary artists: