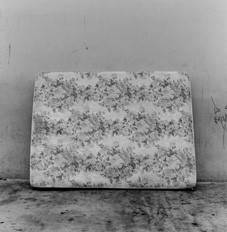 In this jubilee year 2005, celebrating “10 Years of Villa Aurora”, our aim is to document the transatlantic cultural work of Villa Aurora in many different ways in Berlin and Los Angeles.
The highlight is a large exhibition of our scholarship students’ work in the plastic arts, to be held in the Martin-Gropius-Bau. During their stay at the Villa Aurora, the artists have used their scholarships in many diverse ways to develop their own artistic work. The city and their specific life situation have influenced their work in very different ways. A frequent theme is the new experiences of the cultural world of the West Coast of America that have been adapted in the works of art, and an examination of the metropolis of Los Angeles. The works on show deal with the modern eclectic everyday architecture of the city as well as its setting in the desert, its incomprehensibility and external lack of specificity, and the extended peripheral areas. Another theme is Hollywood: the invasion and presence of the film business in the everyday world, the intermingling of reality and film pose, special effects and the city as a film set, the view of the city reproduced by film and the media, and the other Hollywood of the porn industry. The history of the exile and the individual architecture of the Feuchtwanger House itself are also made into artistic themes in highly individual ways. In the conception of the exhibition, attention is to be paid most of all to the innovative impulses that can be given to artistic work by this kind of stay in a different cultural and urban landscape.

The curator of the exhibition is Ariane Beyn. Works are exhibited by the following artists, all of whom have previously stayed at the Villa Aurora on scholarships:

The Villa Aurora artists’ house in Pacific Palisades, California, is a centre of German, European and American culture. As a meeting place for intellectuals and artists, Villa Aurora keeps up and fosters the German-American exchange of art, culture, science and politics.

As the former home of Lion and Marta Feuchtwanger, Villa Aurora is also a cultural monument to German exile on the West Coast of America. It keeps alive the memory of the time when influential representatives of the cultural and intellectual life of Germany had to flee from the National Socialist regime, finding refuge and a new home in California.

After extensive renovation in keeping with its status as a historic monument, the Villa was re-opened on 1st December 1995 as an artists’ residence. Since then scholarships to stay in the Villa for three months have been awarded to over a hundred people from the fields of the plastic arts, literature, music/composition, and film. Villa Aurora also gives a ten-month scholarship each year to a writer who is currently suffering persecution (the Writer-in-Exile Programme).

Since the Feuchtwanger House was re-opened, the Circle of Friends of the Villa Aurora has successfully established an outstanding cultural programme in Los Angeles in conjunction with the resident artists. Important cultural institutions, galleries, universities, etc. in Los Angeles are actively involved as co-operation partners with American artists in joint cultural events such as exhibitions, readings, concerts and film evenings. These events have become a very effective form of public relations.

There are plans to show the exhibition later in Los Angeles.

Catalogue
Visitors making a donation of at least € 15 will receive a copy of the art book entitled “10 Years of Villa Aurora”.