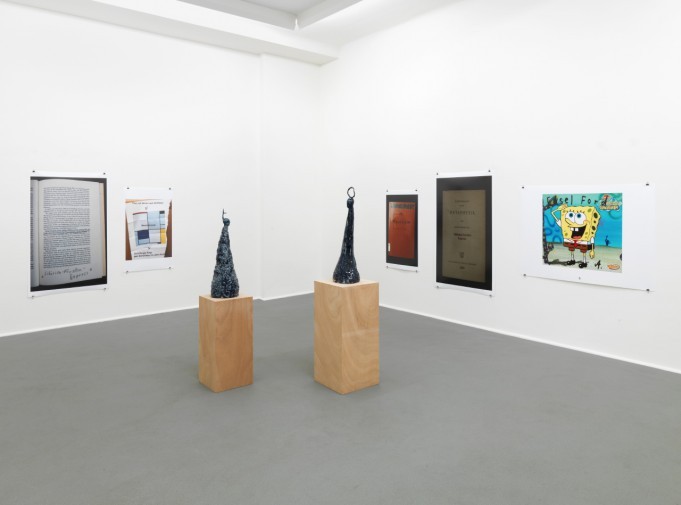 It is now ten years since Sibirien Forellen Express (Siberia Trout Express), and I am absolutely delighted to be able to present the second exhibition from the artist duo Henry Butzer / Boris Dahlem (a.k.a. André Butzer and Björn Dahlem).

Flashback: spring 2001. Butzer, Dahlem and I had just returned from a number of days in Poland, a trip we undertook together with thirty other Berlin-based artists on the suggestion of Erwin Kneihsl. Still inspired and exhausted from the period of all-embracing platonic love that we had experienced together, Butzer / Dahlem created a conceptual arrangement of sculpture, painting, film and music at Maschenmode, the project space I was running at the time. The visionary force of this work left the majority of the gallery-going public and I myself literally dumbfounded.

In the middle of the exhibition space, on a plinth consisting of old hi-fi speakers and a crate of mineral water, stood a black aquarium with something unearthly about it, a number of deep-frozen silver trout shimmering and tumbling around inside. The speakers were playing a piece composed and recorded in polyphonic falsetto by Butzer / Dahlem; the dadaesque song Forelle (Trout). On the adjacent wall hung a sketchy, large-format figurative painting which Butzer had dashed off on unprepared canvas and for which Thilo Heinzmann had created the ideal backdrop with a few carefully placed, coloured glass stones, while Dahlem rounded off the whole with a cardboard box framework that verged on utter absurdity. Heinzmann, along with Marcel Hüppauff and Ralf Schauff, had been invited to participate as guest artists, and each of them presented a piece in the back room. Somewhat hidden away in a corner there was also a film being screened on a less than state-of-the-art video monitor: Butzer / Dahlem’s Der gelbe Helbig (Yellow Helbig), which showed—in woefully poor image quality—nothing but the hyperreferential icon of the classical avant-garde: the black square on white ground.

The exhibition was, if I may say so, a minor sensation. “Finally, some art again!” – these were the words of one enthusiastic visitor at the opening, a highly eloquent text-based artist who now predominantly makes photographs. And so the exhibition was partly responsible for my subsequent decision to give up a fledgling career as college lecturer in order to become a professional gallerist. For I knew that in future I wanted to continue to be involved in what I had experienced here; the realisation of this sort of wonderful, highly intellectual, and delightful madness.

But enough of the recollections. In revisiting the exhibition ten years on, Butzer / Dahlem will by no means be limiting themselves—as the title of the exhibition might suggest—to a display of memorabilia. This merely forms the basis of a contemporary artistic reflection on the question of Being and its intrinsic magic. All of the new works exhibited here, sculptures and photographs, have been commissioned from and produced by other artists. As such they evidence a conscious distance from the two authors and the artistic work they are known for as André Butzer and Björn Dahlem. Here, the profane and the sublime are succinctly mixed in form and content to produce something new, something utopian. The promise that art is capable of its own unique and quite peculiar form of understanding is once again fulfilled.

I look forward to welcoming you all.

Björn Dahlem (b. 1974) lives in Berlin. He is guest professor of sculpture at the HBK Braunschweig. His works are currently on display in the exhibitions Weltraum – Die Kunst und ein Traum (Space. About a Dream) at the Kunsthalle in Vienna; Wir sind alle Astronauten – Universum Buckminster Fuller im Spiegel zeitgenössischer Kunst (We are all Astronauts – Universe Buckminster Fuller reflected in contemporary art) at Marta Herford; and The Shape of Things to Come at the Saatchi Gallery in London.

André Butzer (b. 1973) lives in Rangsdorf near Berlin. The Kestnergesellschaft in Hannover is presently showing a solo exhibition of his work under the title Der wahrscheinlich beste abstrakte Maler der Welt (Probably the best abstract painter in the world), which can be seen until 14 August 2011 inclusive. The richly illustrated catalogue is published under the imprint of the Buchhandlung Walther König.
André Butzer and Björn Dahlem have been running the Berlin-based Institut für SDI-Traumforschung together since 2001.
www.guidowbaudach.com