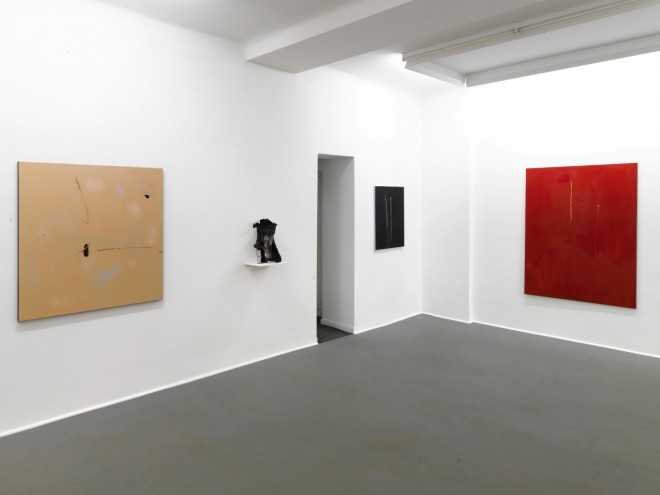 For Berlin Art Week 2012, Galerie Guido W. Baudach is pleased to present a second solo exhibition of work by Thomas Helbig at the gallery space in Charlottenburg. On show are new paintings and sculptures that suggest of a sort of deceleration in comparison to earlier work and constitute an almost auratic panorama in their present installation.

The focus of the paintings is colour itself – in its intrinsic value and its materiality. The formerly atmospheric, diffuse light of pictorial space has been displaced by a clear positing of figure and ground. Worm-like impasto vectors of metallic paint now hover in monochrome regions, often intense in colouration. There are traces of underpainting on the canvases; notches, craters and perforations that lend the pictures both corporeality and vulnerability. A plastic moment is evident in the impasto lines and accumulations of paint, which Helbig applies by syringe. He works the haptic tails of colour into the painting to a certain extent in what can only be compared to a sculptural process. The flowing movement of the strokes evokes a meditative rhythm, though this is broken by the inconstant surface violations. The formal play of verticals and horizontals in withdrawn space produces an illusion of hovering and echoes the symbolism of primitive painting.
As with the paintings, the sculptures have clearly also undergone a process of simplification and clarification. At the same time, Helbig develops the technique of his earlier sculptures: fragmentation and collage with prefabricated materials. He primarily uses industrially manufactured ornamental figures, which are dismembered and reassembled into new bodies. The hybridity of these sculptures makes them seem like fantastic creatures on the point of metamorphosis, at once revealing and concealing their origins.
Thomas Helbig’s exhibition The Mental Life of Savages consists of works in which the visual language is reduced to essentials. In their present installation they constitute an auratic panorama which generates an atmosphere of calm and a space for contemplation.

Thomas Helbig (b. 1967, Rosenheim) lives and works in Berlin. From 16 October 2012 works by Thomas Helbig will be on view at the exhibition Private/Corporate VII, Daimler Contemporary, Berlin. On 27 January 2013 new works by the artist will be shown at the Museum Dhondt-Dhaenens, Deurle.