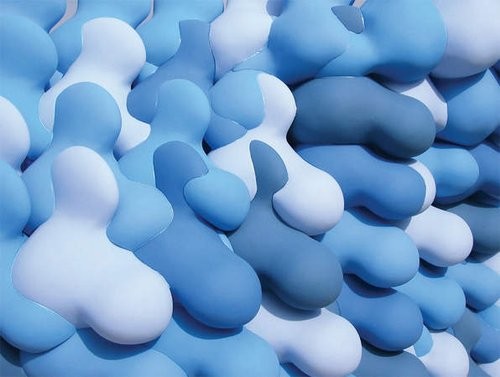 The Hammer Museum presents a new sculptural work by Los Angeles-based architect Greg Lynn. A fantastical attraction for visitors of all ages, Fountain is sited in the Museum’s outdoor courtyard. As the title suggests, the work is a functioning fountain made out of large plastic found children’s toys that have been cut and reassembled in multiple layers, with water spouting from its top and pooling at its base. Constructed with more than fifty-seven prefabricated plastic whale and shark teeter totters welded together and unified by the application of a white automotive paint, Fountain is a gathering place for the warm summer months.

Greg Lynn’s Fountain is the first architecture and design project guest-curated by architectural historian Sylvia Lavin. As part of Hammer Projects, Lavin will organize a new project approximately once a year over the next three years that will present new works by architects and designers. These projects will be sited in different locations around the Museum.