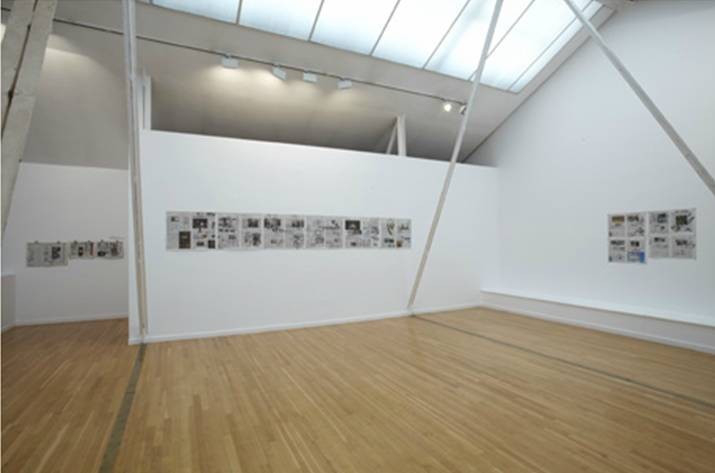 Galería Helga de Alvear presents the second solo exhibition by Romanian artist Dan Perjovschi.
Born in Sibiu in 1961, he graduated from the Enescu Art University in Iasi. During his education, he started to work on drawings, premising his work on the surrounding reality, the university atmosphere. This interest in daily life, and the mechanisms of power is still the basis of his work nowadays.
His apparently simple drawings, with quick traces, cause a visual impact strengthened by their relation to the surrounding exhibition environment, creating a multiple dialogue between the artist, his work, the spectator, and the exhibition space. This very immediate response turns Dan Perjovschi's work into a kind of thermometer of contemporaneity as seen through irony, humour and a certain tenderness.
Ever since his first exhibition in this same gallery (2007), Dan Perjovschi has obtained a growing recognition, both in Spain and abroad. This media attention has changed neither the form nor the spirit of his work, which maintains the same lucidity and irony in its gaze, both towards current events and towards the art world, especially its internal mechanisms of exhibition and assessment of the works.
For this project, titled 17.11.2011, the artist will fill the exhibition space with the Spanish newspapers from the day of the opening. This project, halfway between drawing and performance, delves into the usual concerns of the Romanian artist. By intervening each of their pages with a drawing, he manages to elicit a comment, to emphasise or criticise the reality of our country, in an exercise of true appropriation.
Dan Perjovschi has had exhibitions at Espai d’Art Contemporani de Castellón; Institute for Contemporary Culture, ROM Toronto; San Francisco Institute of the Arts, San Francisco, U.S.A.; Spencer Museum, Kansas University, USA; Castello di Rivoli, Turin, Italy. He has taken part in the Biennials of Istanbul and Seville, and has produced projects at the Ludwig Museum in Cologne, the Tate Gallery Modern in London, the Moderna Museet in Stockholm, the Centre Georges Pompidou in Paris, and at MOMA, New York.
www.helgadealvear.com/