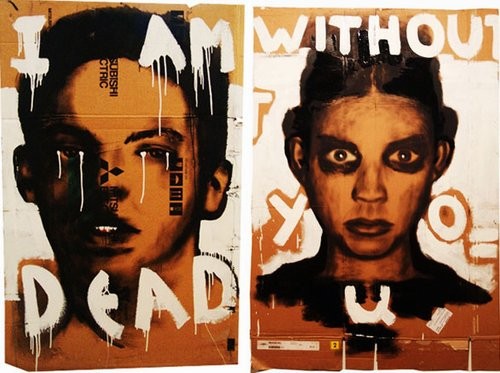 © Dimitris Andreadis
Dead Without You
DIMITRIS ANDREADIS
"Keep a Light On"

Dimitris Andreadis graduated with honors from the Athens School of Fine Arts in 2005. Since 1999, he has participated in various visual arts events both in Greece and abroad. Keep a Light On, his first solo exhibition, comments on contemporary mass culture by distorting the image of its leading figures, presenting them as an era’s broken, fallen icons.

His painting is poised on a verge between the Classical and the Modern, which ultimately allows it to gain its independence. His expressive idiom involves the transformation of discarded cardboard boxes into symbols of power and agents of discourse. By downplaying the significance of matter, in its capacity as both surface and trace, he highlights the need to preserve the spirit’s momentum. He articulates a poetics of counter-propaganda, using captions and slogans to undermine the pictorial image. In his practice, images of everyday life acquire an iconic quality; they become the symbols of an era: pre-existing social material is thus recycled to provide a new, revised product. Andreadis couples the aesthetics of street art with the teachings of the great European masters to underscore the fictitious nature of the dichotomy between modernist and conservative trends. His experiential approach of art is an important characteristic of his work. The source of his references is the realm of everyday life and of the real world, not the sheltered space of an elite, an ivory tower of some sort. From the straightforward erotic comment to the ideals of revolution, his work traces a series of dynamics and relationships in an effort to outline a domain of unfettered reflection, rid of polarization and political convention. Andreadis’ art is immediate, eloquent, and intelligible. It is an art that takes advantage of both the potential of figuration and a knowledge of western abstract tradition, offering viewers the luxury of drawing their own conclusions without being guided, or patronized for that matter.
www.art-tounta.gr