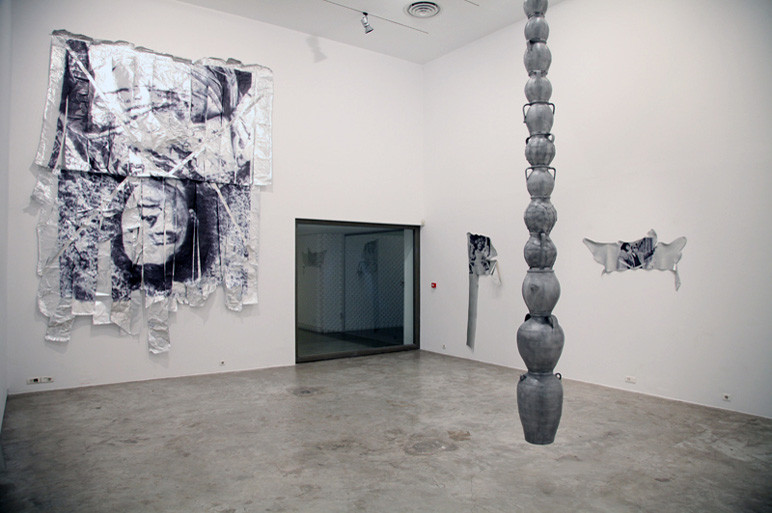 The new solo show by Dimitris Andreadis constitutes an epitomy of his creative concerns for the past 10 years of his career. The combination of large canvases creates installations that consistently depict a battle between colour and shadow. Once again, his art surpasses the narrow limits of the surface and restructures itself in a wider field. The limits of the saturation of the form and the perception of the artistic unit are explored through the juxtaposition, the abruption, the adherence and the overlapping in his work.

The concepts of a diptych, triptych and polyptych project are revived and presented with a sense of originality and strength. Canvases resting on the ground, paintings whole or cut through, with a leading or supplementary role, guide the viewer to observe the end result beyond a typical view of a drawing. An existential relationship starts to grow with the object, leading to a vibration that one can come across in the fields of rituals and religion. This new iconography of the void, without a name or a face, is the essence of his research.

His skill in color, form and composition behave as a pathway to an abstract and conceptual space, that he so clearly and specifically states. Above all, Andreadis reinstates simplicity and lucidity as well as the battle between the organic and the inorganic through abstract painting. The end result is a new essence, life and importance in the everlasting matters of the art.

Hemlock or Poison is a highly poisonous perennial herbaceous flowering plant
in the family Apiaceae, native to Europe and the Mediterranean region. His latin name is conium, borrowed from Greek κώνειον, originating from verb κωνάω, which means revolve.
www.art-tounta.gr