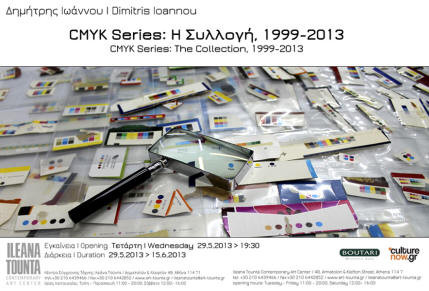 In his new solo show, Dimitris Ioannou presents his extensive collection of calibration marks that someone finds on the packages of products. It is about images that are being used in order to control color in printers which print on packaging using the offset method and originate from a wide range of retail products, such as cigarettes, food, as well as electronic devices.

The process of creating the collection started in 1999 and continues to this day. The packages, where he removes the calibration marks from, have been consumed either by the artist himself or by a broader cycle of his social contacts (people that act as “donators” in the collection).

Primary element in Ioannou’s work is the use / ownership of readymade images and objects and their transformation through the change of their perception frame. Their juxtaposition, in a way in which stamps, coins or botanical samples could be displayed, creates a narrative that demonstrates the process of collection.

This show is a “remix” of the CMYK Series project: The Collection, 1999-2013, which he presented in 2005 for the first time, at his first solo show. At the time, he had presented a series of oversized calibration marks on Lambda prints, with references to the relationship between the model-serial and abstract painting. This time, the collection itself is present.